When you think about it, the Naruto anime series offers a lot of potential for video-game adaptation. Not only does it possess interesting storylines that have kept audiences gripped for over two hundred episodes, it boasts a huge roster of lovable, eccentric heroes and villains, and more over-the-top ninja combat than you can shake a nunchuck at.

Around a year ago I reviewed Naruto Shippuden: Ultimate Ninja Storm 2 by CyberConnect2, and I wasn’t left disappointed. With the ability to play as practically every character in the series, and battle it out using their signature moves in settings familiar from the anime, it was everything a fan could ask for. Impressively faithful visuals during the action-packed fights and cut-scenes provided so much authenticity, it was easy to believe that you were literally watching the show. This wasn’t merely fan service, however; it was bloody good fun to boot.

Enter Naruto Shippuden 3D: The New Era. Produced by a different developer, Tomy, it brings everyone’s favourite hyperactive ninja to the 3DS for the first time. Unfortunately, if Ultimate Ninja Storm 2 was an example of how to do (mostly) everything right in a Naruto game, then The New Era is its antithesis. How did it all go so wrong? Read on to find out.

Welcome to The New Era

In Naruto 3D, strange happenings are afoot, with all five nations of the world suddenly declaring war on each other. Naruto goes to visit Granny Tsunade, the Kage (leader) of his hometown, Hidden Leaf Village, for an explanation. She isn’t her normal self, however, acting hostile and proceeding to attack him. As Naruto defeats her, it turns out that it isn’t just the time of the month that’s to blame; he has in fact encountered an impostor, consisting of a puppet imbued with chakra. The real Tsunade is nowhere to be found, so Naruto embarks to the other four ninja villages in order to find her. 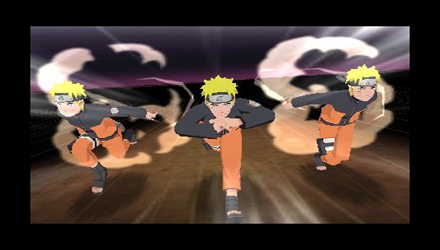 I got chills; they're multiplyin'...

The Kages at the other villages are also behaving suspiciously; predictably they have also been replaced with impostors. A shady woman by the name of Malice is revealed to be the culprit, having captured them all to use their combined chakra power for nefarious purposes. The plot is based on one of the last storylines of the Naruto anime, but is told in such an unbearably dull fashion that it is left completely devoid of any feeling of drama or suspense.

Most of the storyline just comprises of going to one ninja village, fighting the Kage and discovering that they are an impostor, then going to the next village and finding out that their Kage is an impostor; rinse and repeat. At the game’s conclusion is the obligatory confrontation with Malice, then Naruto saves the five Kages and everyone lives happily ever after. I don’t care that I’ve spoilt the plot for you; it’s utter tat anyway.

It doesn’t help that the translators Tomy hired apparently had no interest in doing anything other than a basic translation from Japanese and English, so the dialogue script appears like it has been written by children.

Super Naruto Bros.
For some reason, Tomy decided that the best genre for Naruto 3D, part of a fighting and adventure franchise, would be an old-school, side-scrolling platformer. The rest is history. Each level involves playing as Naruto, hopping around platforms and collecting coins and scrolls. The new era? We’ve had this kind of gameplay for three decades now. 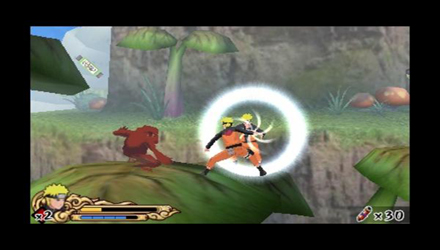 The difference is, koopas and goombas actually moved back then, albeit in basic, predictable patterns. The majority of enemies in Naruto 3D are firmly rooted to the spot, throwing shurikens, or punching and kicking when you get close enough. I wish I was making this up. Mashing one button makes Naruto punch and kick back; mashing another throws shurikens of his own. There is no block option, but there is a poorly implemented dodge manoeuvre, which by the time you’ve pulled it off, will probably be too late.

In all fairness, the combat is a little more complex than that. Before each level, you can choose three different sidekicks that briefly materialise and unleash a special attack when summoned. Naruto also has two special attacks himself, one of which is accompanied by a cut-scene that you’ll be sick of seeing after the first few times. Finally, when your Nature Energy gauge is at least partially full, you can enter a special ‘Sage’ mode that makes attacks more powerful.

None of this helps raise the gameplay of Naruto 3D above anything but mediocre, however. The phrase ‘polish a turd, it’s still a turd’, comes to mind. Every level involves the same humdrum platforming, with a sub-boss in the middle, more humdrum platforming, and then the main boss at the end. In a total imbalance of difficulty, levels are generally plain-sailing all the way through, up until the bosses, which can be crushingly hard. The best way to tackle these is to run away, and spam shurikens and sidekick-attacks; it’s cheap and makes playing the game even less entertaining, but it works. 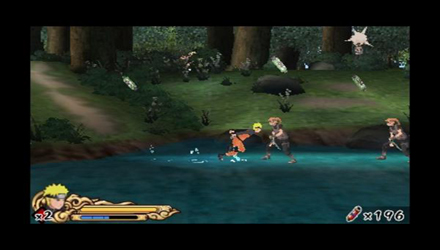 It's okay; every enemy ninja is apparently equipped with lead boots. Just jump straight over them...

Interspersed throughout the levels is a healthy dose of everyone’s favourite game mechanic, the quick-time event. These involve quickly jerking your 3DS to the side, or rapidly tilting it left and right like a toddler with a steering wheel. You really need to do these forcibly to pull them off; once I lost my grip and almost threw the console on the floor. I have no doubts about who I would have sent the bill to…

Arguably, the most compelling feature of the game is the ability to upgrade your skills and purchase new ones with the coins and scrolls that you collect. There is nothing particularly impressive or revolutionary about this component; I’m just grasping at straws here. If you fail a level, you keep the collectables that you’ve gathered, so you can at least upgrade and approach it slightly stronger next time. The obvious downside is that you still have to endure the monotony a second time through.

Now you see me; now you don’t
Visually, Naruto 3D just about does the job. The characters are portrayed accurately, and nothing looks particularly offensive. That said, the same level elements, character models and bland textures are recycled over and over, meaning that it all just blurs into a repetitive sludge. The 3D effect isn’t overly impressive in-depth; to be honest, the element of the game where it is most dramatic is the main menu. 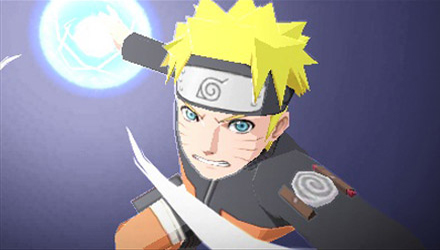 Being punched with a goldfish bowl always smarts...

The special attack cut-scenes are probably the most appealing part of Naruto 3D, but it doesn’t take long to tire of them. Storyline cut-scenes are exceptionally dull, mostly composed of static, insipid conversation between the characters. You might as well watch something more exciting on TV whilst these play through, like the shopping channels or something. You won’t miss much.

To add insult to the injury of the game’s uninspiring graphics, slowdown is relatively common; as a matter of fact, it is crippling in some areas.

You hear that? No? That’s a ninja
Even less inspiring than the graphics of Naruto 3D is its audio. The background music is utterly forgettable dross; it may as well not exist, considering its lack of impact on the senses. Sound effects are similarly weak and generic. To remove icing from an already-unappetising cake, voice acting is completely absent. I found that this really added credibility to Ultimate Ninja Storm 2; what’s more frustrating is that supposedly the Japanese version has voice acting present. They obviously just couldn’t be bothered to translate it into English, just like they couldn’t be bothered to make a good game in the first place.

Multiplication jutsu!
So, does an excellent multiplayer mode salvage what is ultimately a poor single player experience? No; in fact there isn’t one. Oh, and did I mention how long it takes to actually complete the single player campaign? A pathetic four hours. Don’t panic; there’s always the option to replay each level in Challenge mode! I’ll pass, thank you. 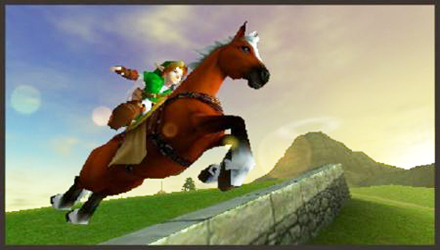 I'm fed up of seeing screenshots of this game; here, have a picture of a good 3DS title instead. Ah... that's better.

An unworthy opponent
Nothing in Naruto 3D is inherently terrible. The key word here is thoroughly and irrevocably underwhelming. The amount of effort put into this game, from the story, to the level design, to the graphics, is unmistakably minimal. I willingly played it through to the end (not it that took very long), and very rarely did I feel any deep hatred towards it; essentially I felt nothing. Naruto Shippuden 3D: The New Era is a completely soulless experience, and I can think of absolutely no reason why you should buy it.