Prince of Persia: The Forgotten Sands tells a story that reaches further through time than its plot. This story spans decades and console generations, and, coupled with the gameplay, is a convergence of two separate universes existing under the Prince of Persia name. Melding 2008’s Prince of Persia with the best parts of the Sands of Time series, Ubisoft has created one of the most unforgettably fun and exciting platformers in years.

Set between The Sands of Time and Warrior Within, The Forgotten Sands chronicles our Prince’s timely visit to his older brother’s castle. Of course, the Prince just happens to reach the castle as it’s coming under siege by some vague enemy army backed by some nondescript enemy leader. Cue him coming to his brother’s aid, the snarky, faintly comical banter which ensues, and blah blah blah action movie stuff blah. The encroaching enemy then forces the brothers deep within the castle where they find and unlock the sands of time. The sand is unleashed and sandifies everyone except the Prince and his brother because they’re each holding a sacred item which allows them to control the sands of time.

Honestly the story is so pathetic and rife with clichés and commonalities (with older games in the series) it’s both delightful and disconcerting. Delightful, because it’s hilarious, and disconcerting because it’s alarming how little care is put into the stories of some games. In any case the gameplay bares little relevance to the story and seems to have been completely finished prior to there being any script.

Sand in your underpants
The Forgotten Sands, like the games in its brother franchise, Assassin’s Creed, takes some time to actually get fun. The beginning is apparently a complete remake of the intro to The Sands of Time, and huge fans of that game will notice this immediately. Worry not; give the game time and it’ll come into its own.

Should you do so, what you’ll find is a challenging puzzle platformer with bare RPG elements and shallow hack-and-slash combat. Though that brief summation may seem unappealing when laid out so plainly, when put into practice within the game the result is a brilliantly executed, unforgettable experience matched only by The Sands of Time.

At its opening, the game comes off as awkward and disappointing. Movement doesn’t seem tight, and combat is repetitive; besides, executions are so boring there’s no good payoff when all is over. The puzzles are simple and annoying, especially since you don’t have the sands yet and checkpoints aren’t as forgiving as they could be. The Prince’s monologues are dead and unentertaining; without Elika or Farrah at his side to be contrary and counter his asshole complex, you’re trapped listening to him converse with himself.

Then the sands are unleashed, and everything turns around. As I’ve said, this game is the culmination of the entire series beforehand. The entirety of it is a combination of all of the best elements from older PoP games. Aided by his equivalent of Elika or Farrah (who sits idly in another dimension), this Prince can control water, restore destroyed features of the castle and, like before, reverse time. If you make a mistake, you can rewind, but you must be mindful of how many slots of energy you have remaining. Once those are exhausted you’ll be playing old school where everything counts. Oh, and don’t expect to be put nicely back on the landing you just fell from; this isn’t PoP 2008. Here, when you die, you’ll likely be taken all the way to the beginning of the area you were just in, or at least to where you were once the last cut-scene ended. 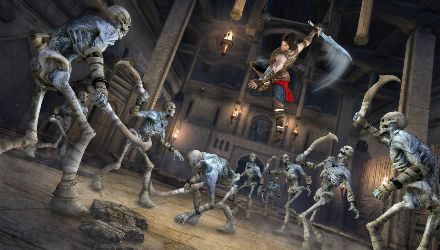 Skeletor pulled a few strings to get his cousins a role

The combat plays like God of War would with a single sword and no combos. Of course there is magic, as no Prince in the franchise would leave home without some, but combat is so easy that if you enjoy it at all you’ll likely want to make little use of it. It does, on the other hand, expedite battles if you grow tired of hitting the same two buttons over and over. However, you can only use one spell at a time, and each takes up an energy slot, which could be used for a rewind and is not very often refilled, so there is a bit of forethought involved in using magic.

The game is at its best when you’re tasked with compounding puzzles which have you figuring out where you need to go, what you need to do and how you need to do it. Don’t be surprised to find yourself more than once thinking you’re done with a puzzle only to learn you’re merely halfway there. Pure platformer fans shouldn’t be totally scared away by this. There’s a perfect blend of challenging puzzles and easy puzzles, the simple ones precipitating the more complex to slowly demonstrate to you the necessary methods and thought processes. It’s accessible and enjoyable, and it’ll have some players shocked at their abilities.

The platforming itself is a mix of PoP 2008 and The Sands of Time, though by far mostly The Sands of Time. Fans of that series should most definitely pick this game up, as it not only revives that excellent gameplay but improves on it with subtleties as well as more obvious changes, like water manipulation, which revolutionizes the familiar old Prince of Persia style. For example, whereas normally certain areas of any given room might be off limits, once the water is instantly frozen an indoor waterfall can become a wall to run up, and water streaming from a wall-mounted fountain can become a pole to swing from. This gets exponentially more complicated as you’re confronted with rooms that force you to freeze and unfreeze the water mid-air with precise timing to alter what is and isn’t accessible at exact moments.

Grains of sand!
Graphically, The Forgotten Sands is standard and nothing more. However, your day has arrived, fans of the emo Prince from Warrior Within. All two of you. Though this Prince matches more closely the man from Sands of Time, he apparently stopped off at the local Hot Topic before heading to his brother’s. What a fabulous choice. Just be glad he looks nothing like Jake.

All hail the Prince… or not…
The Forgotten Sands’s audio is just as unremarkable. Even those who recall certain little musical refrains from The Sands of Time might find it hard to remember any single sound from this game other than the Prince’s whiny voice and that frustrating little blurb of off notes that plays every time you die. Also, that infuriating cling! you get from hitting invulnerable enemies is back. Yay.

Retreading over old sand…
Prince of Persia: The Forgotten Sands is honestly best described as a remake of Sands of Time with the engrossing experience sacrificed for the sake of improved controls, more accessible puzzles and deeper combat. At its basest levels this game is simple fun, and that’s all a platformer needs in order to be worth anyone’s time. If you love Prince of Persia, buy it. If not, your best bet is to rent this game and first play it at a moment when you’ve nothing but free time and open-mindedness. You’ll undoubtedly be glad you did.