It’s been a weird year for me in regards to reviews. I’ve already been able to pass judgement on my favourite game of all time thanks to one re-release, and now I find myself in a position to review the second in my list of personal favourites thanks to another. While the first three Resident Evil games helped define what we all thought of survival horror, Resident Evil 4 came in at the right time and changed the landscape of the genre forever.

The ripples of Resident Evil 4’s impact on the industry didn’t just stop at survival horror, either, also helping to shape many of today’s standards in the third-person shooter market. While its influence on the likes of Dead Space is obvious, those currently enjoying Gears of War 3 might take a second to reflect that it might not have existed in its current format, if it wasn’t for the work of the legendary Shinji Mikami on the 2005 classic. Don’t believe me? Hit Google; Cliffy B has cited RE4’s influence on Epic’s trilogy on many an occasion.

So, it’s fitting that in the same week that one of the modern-day classics concludes its trilogy, Capcom digitally re-releases the game that helped make it what it was.

Does it still hold up today? Mostly.

Dead Kennedy’s
Six years have passed since the Umbrella Corporation’s shady dealings in bio-weaponry lead to a city-wide zombie outbreak, and the eventual nuking of a previously peaceful Raccoon City. With several plucky survivors making it out alive by the skin of their teeth, Umbrella’s dirty little secrets were exposed to the world, leaving them with worthless stocks and thusly ending their operations.

In the aftermath, one such survivor, rookie cop Leon Kennedy, is headhunted by an unnamed government agency that answers directly to the President. It’s no surprise then, that when the President’s own daughter is kidnapped, Leon is the first one on a plane to follow-up leads that a sinister cult in rural Spain may have something to do with it.

After arriving at his destination, an eerily calm and remote village, things quickly go to hell. Leon and his escorts find themselves under attack by mindlessly savage locals. When his escorts are killed by this new type of threat, Leon begins to realise the knock on effect that Umbrella had on the world… 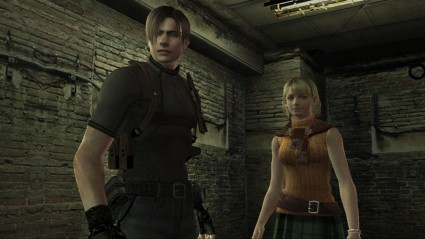 Our hero, Leon Kennedy and the girl he has to rescue...

At the time, the storyline was a bit of a departure from Capcom’s previous works, but it still carried that slightly hammy, B-movie feeling that’s been a staple of the series since the very beginning. Yes, it could be a little melodramatic at times, but Capcom managed to blend these moments perfectly with all the tension, atmosphere and sense of urgency that a series like this requires. A great cast of characters also helps to top things off nicely, with familiar faces and new major players moving the plot along at the perfect pace.

The daddy of modern-day Survival Horror
Okay, so Resident Evil 4 was the first in the series to shift away from tank controls and fixed camera locations, to take on a more action-orientated viewpoint behind the protagonist. Where the prior games aimed to create Hitchcock-esque scares through artsy camera angles and nerve-racking tension littered with jumpy moments, the switch to third-person shooter meant that the team had to shoot for a different type of horror. They pulled it off with aplomb.

It doesn’t fuck about either. From the moment you start Resident Evil 4, you’ll feel stalked and hunted. You’ll be constantly under pressure from a more intelligent type of creature to that of your standard zombie. These guys rush you in great numbers, run at you, set traps for you and use weapons. They can climb ladders, open doors and seemingly appear from anywhere. It’s almost like being in The Texas Chainsaw Massacre at times, as you hurriedly scramble up to rooftops, kick ladders over and barricade doors to buy yourself some precious time to reload or heal.

When the occasional serene moments do come, you’ll spend them entirely on edge, expecting the game to throw more at you than you can manage, and at times it totally does. The term ‘survival horror’ never meant more to me than with this game, and I’ll struggle to think of another title that tests your own survival instinct better. 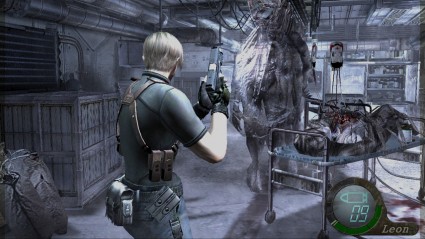 It’s a game that gets better and better the more you delve, constantly evolving as you get a handle on things, offering you new twists on gameplay or ways to just about keep your head above water. It’s also got this way of making you feel like you don’t want to keep on playing because of the tension, but you really can’t pull yourself away as it is just so absorbing.

The game still controls solidly by today’s standards, and isn’t hindered in transition from the Gamecube version to next-gen consoles. While it might seem slightly clunkier if you’ve recently been playing Resident Evil 5, it won’t take long at all to get into the swing of things. That said, there are some things here that will annoy newcomers, or those used to more recent third-person action/adventure games. The inability to strafe or shoot while moving will be the two at the top of that list. While it sounds archaic now, it is all part of what helps create so many pressure cooker moments. You have to really think about when to stop and take aim with your laser sight, all while several enemies are converging on you, thirsty for blood.

For the first half you’ll be dealing with ancient weapons; old-fashioned shotguns, bolt-action sniper rifles and, of course, the stock Barretta. After you meet one of the travelling merchants that are dotted around the place, you can spend the pesetas you find to upgrade the weaponry in key areas (firepower, capacity, reload speed etc.), helping you keep up with the new challenges ahead. You also buy most of the newer, better guns from the merchants rather than finding them, culminating with military/police grade weaponry in the second half.

You have to be careful, though, as you can only carry so much. Inventory is managed by a big weapons case (which can be upgraded in size as you play), with each weapon and item taking up so many spots. You have to be selective about your arsenal; otherwise you’ll be testing your Tetris skills should you have too much. 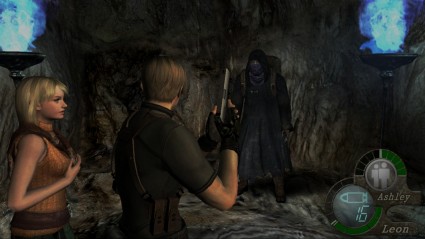 'What are you buying, stranger?' The merchants are your source for new guns...

As much as your own arsenal evolves over time, so does the enemy. The Ganados are tough early on, but when they start filing out of their hiding places with chainsaws, shields, maces and crossbows, or evolve into an insect form once you’ve popped their heads, they get much tougher; believe me.

Of course it wouldn’t be Resident Evil without various animals and creatures that have suffered the same fate as the humans, and you’ll be bombarded with all sorts of other nasties along the way. Boss fights require quick thinking and some pattern spotting if you’re to come through unscathed; each has its own little formula that you must work out, using your noggin to your advantage. Some of the bosses may have obvious weak points; however, most are a little more subtle, and you’ll have to work out how to approach them on the fly.

Downsides? Well, for those of us pampered by auto-saves and checkpoints, you will have to manually save at the series-standard typewriters, but that’s about it in an experience that, on pure gameplay terms, has aged incredibly well. 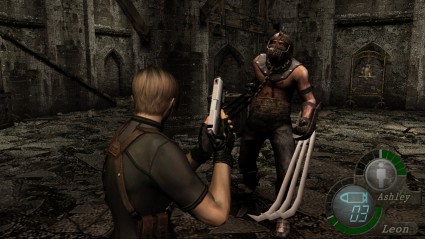 The Beserker fight from Gears of War might not have existed if it wasn't for this guy.

Not quite pixel-perfect
Resident Evil 4 was, without a doubt, one of the best looking games of last generation, especially on Gamecube. Hell, it was probably just about better looking than a lot of the launch titles this generation. So, that should mean it looks extra awesome in high-definition, right? Unfortunately not. This is the one weakness in the Resident Evil 4 HD armour. It’s that HD tag that causes the problems, too.

Don’t get me wrong, it still looks as good as it did; the themes of design alone are spectacular, but by today’s standards it suffers. Unfortunately, that’s because viewing the game in HD means that a lot of the lower grade textures are more noticeable than they used to be. It’s the little things like a slight distortion on Leon’s t-shirt that’ll quietly nag away at you while you play. Some aspects of the environment, like detail on furniture, can look blocky, if not downright ugly when viewed close up. It is what it is, though, a straight port, evident in the fact that not even the in-game text got a makeover. 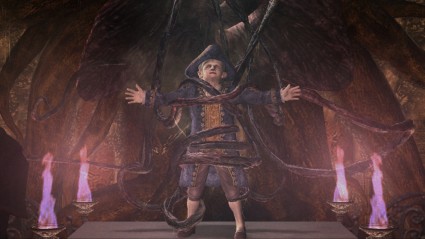 Ramon Salazar: One of the more interesting characters from this game...

Hammy, but I love it!
The voice acting in Resident Evil 4 is very decent, with everyone seemingly playing their characters with great enthusiasm, as if they all had real fun with it. If you’ve played this before, then you’ll know what to expect. If not, but you like B-movie horrors, then you’re sure to love it. It’s not all cheese though; the game still knows how to be serious when it wants to be, and this is no more apparent than in the soundtrack.

It’s classic Resident Evil in this respect, with haunting tones that can send shivers down your spine with a single drone or pad. When enemies start their (seemingly) endless waves, you’re dealt this low, humming noise that constantly churns away all the time you’re in danger, eating away at your state of mind. It’s a game where the audio plays a huge part on putting you on edge or making you panic, and that it does so well.

Still the same great game…
In 2005 I remember being so amazed that they’d changed so much about the series in Resident Evil 4, yet it still felt every bit a Resident Evil title. This time, what’s amazing to me is that even after playing it three or four times over the last five years, it still manages to engage me through almost twenty hours of pure, heightened tension in exactly the same way it did when it first came out. While visually it may not have aged quite as well as some of the other feathers in its cap, it still manages to take you for a ride by the seat of your pants, thanks to everything else working so well.

It’s a game that’s so easy to recommend; however, that recommendation does come with one caveat. It’s a straight port, so if you already still own the game on Gamecube or Wii, there’s no real incentive to purchase it again unless you really want those achievements. For everyone else, it’s very much a must-buy.