Sometimes video-games can be a little bit out-there, giving us a real chance of escapism, such as Mr Mosquito or Toe Jam and Earl. On other occasions they can be supremely realistic and offer a chance to live out our childhood fantasies, like Call of Duty or FIFA. Rock of Ages from ACE Team certainly falls into the former category; this is of course unless your childhood fantasy was to roll a giant boulder down a hill on a mission to storm a castle while avoiding angry bulls.

Released this week to the XBLA for 800MP, I have loaded my catapults, built my towers and given my boulder one almighty shove, to see if this strange mix of attack and defence can bowl a strike. Read on to find out if it did.

Rock of Ages sees you take control of Sisyphus, an ancient Greek king. According to the myth, he was compelled to spend eternity rolling a giant boulder up a hill, only to see it roll down again before he made it to the top, as a punishment for his deceitful and murderous ways.

In the game, the reason for Sisyphus’ failure is laid at the door, or rather spear, of some annoying creatures who poke him on the bum every time he gets close, causing him to lose his grip on the boulder. After several attempts, the king realises that the best option would be to roll his boulder the other way, taking these creatures out on its way downhill.

War and skee ball
Rock of Ages has three main game modes, with the main single player option being War. This sees you take control of Sisyphus, as he battles to break down the castle gates and squash his various enemies throughout the ages with his giant boulder. At the same time these kings will attack your castle in the same way, and the winner is the one who breaks down the gates first. 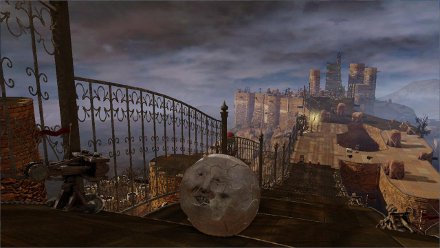 The castles sit at either end of a bridge, with a section in the middle for launching the rocks. Once your people have built a boulder you press the Y button, select your boulder modification (such as flame or spikes for added protection), and then release it. You then control the boulder on its journey, with the left stick for movement and the A or LT button to jump.

Should you fall or be pushed from the bridge, God’s hand will kindly put you back on so you can carry on toward the target. As you travel along the bridge you collect keys, which serve no purpose other than being the game’s token collectible. You do, however, also pick up gold for destroying buildings and killing people, which can then be used either to pimp your boulder or set up some defence of your own castle.

This protection of your own castle is the second part of War, and offers some tower defence style gameplay elements. During the time your minions are working on a new boulder, you can place some strategic obstacles with the A button, to try and slow down or damage your opponent’s one. These obstacles can be catapults which fire small rocks to deflect and inflict damage, towers which provide a barrier, or even bulls, which charge at the boulder to damage it and knock it off the bridge. All of these can be upgraded, and additional items unlock as you progress through the ages.

Your final defensive option is the castle-mounted catapult that you can fire by selecting, moving the target and pressing A. This can be used to try and do further damage to your opposing number’s boulder (and earn you an achievement in the process). 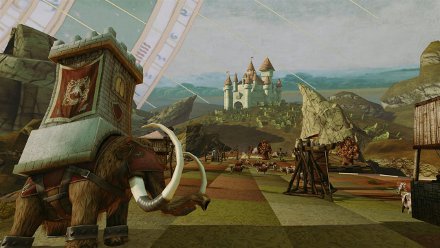 Defend your castle with an elephant

The second game mode is Time Trial, which plays much like Marble Madness, as you aim to get your boulder to the end of the bridge in the quickest time possible. You can only play the levels you have unlocked in War, and depending on your performance a Bronze, Silver or Gold medal is awarded. The target times are pretty tight, and as such, even the easiest levels will take a few goes to beat the Gold time. This mode is a nice enough alternative to the War mode, but in all honesty is not likely to extend the lifetime of Rock of Ages for more than a few hours.

SkeeBoulder is primarily a multiplayer mode so I will cover this in more detail later, but you can practice in single player to your hearts content. The aim here is points. Along the route this time there are easel targets that you will get points for hitting, and at the end of the bridge is a skee ball target for you to shoot at. Your total score is multiplied by the target number you hit, from one to six.

For anyone unfamiliar with skee ball, it is a game you will almost definitely have played at the fair, where you roll a ball down a slope before it hits a ridge. This lifts the ball into a target area, which has several holes assigned with different values. I have to say the single player practice mode is fairly limited in terms of entertainment, especially as once you get into the target area you can force your boulder to go up slope and jump into whichever target value you want.

The full monty
The visuals in Rock of Ages are certainly different. Rather than going for the traditional HD cartoony option that seems to be the XBLA standard, ACE Team have instead opted for a Monty Python style of rather crudely drawn cardboard cut-outs, animated in a way that suggests either a sequence of photos that have been taken, or one of those flip pads.

Although on first appearances this gives a pretty basic, low-key feel to the game, it actually is a breath of fresh air, and creates a fairly unique style that adds to the Greek mythology that runs throughout the story. 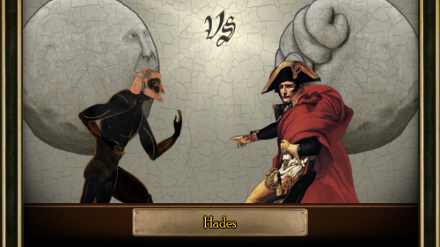 Rock and roll
Within menus the music is a fairly jovial tune of orchestral instruments, and this style is continued in the levels. The tunes match the age you are in by style, and the best way I can describe it is, again, a touch of the Monty Pythons. Anyone who has ever watched any of the Python films will instantly see and hear the influence in Rock of Ages. As with the visuals it sets the tone and fits in with the style.

Effects are a little more low-key overall, with not much more than the odd catapult noise and a few squeals from the villagers as you roll through their buildings. The first bull upgrade is an elephant which trumpets as it attacks the boulder, and castle gates crash as you break through.

Balls
Two of the game modes are available for either Xbox Live or split-screen multiplayer action. War is played in the same way as the single player mode, with your opponent taking over from the A.I. in the battle to destroy castle gates. Naturally, this increases the challenge, and isn’t a bad way to spend an hour or two of your gaming time. In the games I have played to date, the general rule of victory has been about hitting your opponent’s gate as quickly as possible, in order to get the next boulder on the build. It seems to always take three hits to knock down the gate, and stopping your opponent is a really tough challenge.

The other option is the SkeeBoulder mode. Where this differs from the single player mode is that you race head-to-head, and only get the multiplier if you are first to reach the skee ball target. In SkeeBoulder there are three rounds, and the winner is the person with the most points accumulated at the end of the three rounds. The fact that you only get the multiplier if you beat your opponent adds an extra level of tactics to the mode. You weigh up hitting more easels for a big score, against getting to the end quicker with (more than likely) a smaller score, but a bigger multiplier to add to your total. 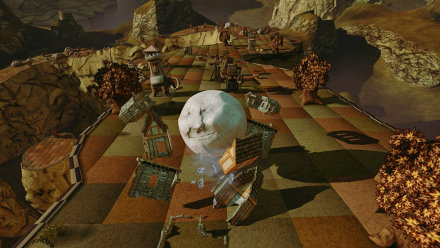 Despite the fact that you run simultaneously down the same track, you can’t bump your adversary off the side for any time or points bonus, so it is a straight race to the finish. Going after targets is also usually a waste of time, as the winner is often the guy who reaches the target quickest in two out of three rounds.

The plus points are that you don’t have to have unlocked a map to play it in either mode, and the game plays very smoothly overall. The main negative is that finding an online game is not exactly easy as the community is small, so you may be left sitting in a lobby for a fair old while in between matches. Then again, we are very early in the life of Rock of Ages, so this may change.

Between a rock and a hard place
Rock of Ages is certainly different and by no means without charm. However, all three of the single player game modes quickly become a little bit repetitive, as you simply roll your boulder at the opponent’s castle and place a few obstacles on course while you wait for the next one, with no real belief that it will make too much difference.

Similarly, the multiplayer modes can offer a limited amount of enjoyment between friends but do rapidly become a bit boring. The skill factor appears to be pretty minimal overall, as the game focuses far more on getting the boulder to its target as quickly as possible, rather than the defence of your own gates. Overall, though some may get some limited enjoyment for a short period, the verdict has to be: