Tobin Bell might possibly be the creepiest guy in a film. Now I’m not saying that the guy is downright weird or anything, he just plays characters far too well. That said, Jigsaw was the only thing I liked about the Saw film franchise. The twisted way of dealing with his victims, having them kill themselves with nothing more than circumstance and swift kick in the right direction.

A while back I had the chance to play Saw: The Video Game, by Blacklight; Tango Down developer Zombie Studios, and I have to admit that I did enjoy it more than the movies. It wasn’t as graphic, but it did try to have shock value but that’s not why I liked it either. It was because it made me feel more engaged within the storyline. I know it wasn’t the best game ever made, but trying to work out the puzzles was brilliant. Even if the setting on occasion was tasteless and so far off the reservation that your moral compass would be telling you to die and save someone else’s life, you knew that a selfless act like that wouldn’t happen.

I SAW the film… but this is the game

Needless to say, Saw II does try to shock you from the beginning of the game and I don’t want to delve too much into the story as it would kill the atmosphere for you. Initially taking the roll of a man called Campbell you have to escape and rescue to your son. After a brief easy level to get you into the game, you switch characters to Michael Tapp, son of David Tapp; the protagonist of the first game and the first film.

After being abducted from his father’s apartment just after his suicide, Michael is thrust into the no-win situation that his father had been in previously. Uncovering some of his darkest secrets, Michael must play Jigsaw’s game and follow the rules learning more about his father and himself. Both Campbell and Michael’s lives are on the line and only one of them will be walking away.

The storyline is quite basic and most of what you learn would be found out by collecting information along the way. This is optional and for some people blasting straight past to the end may be the way to go. The most notable is the audio tapes that you can collect, most giving some valuable back story. Also scattered about are case files for you to find, providing some details into some of jigsaw’s victims. There are three endings and actions at the beginning of the game determine what will happen to both characters.

I SAW how to do it!
If you are a big fan of the game Fahrenheit (Indigo Prophecy in some regions) you will be quite familiar with the style of gameplay. Unlike the first Saw game, pretty much everything involving some sort of action is a mini quick-time event. If you are attacked, you have to defend yourself by pressing the buttons displayed on the screen. Failing just one of these will cost you your life and there is no room for error. Sometimes almost hitting a trap will involve the same thing. Some enemies will not involve a QTE and you just have to avoid them and use your environment to dispatch them. The remainder of the gameplay consists of wandering around collecting items and completing set puzzles to open locks or save someone’s life. 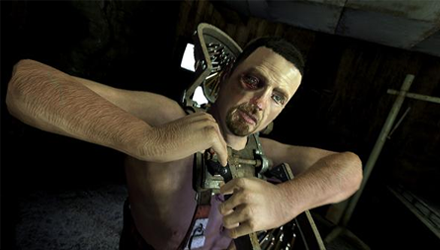 Sometimes you will come across various doors that are locked and in order to get through them you have few ways depending on the type of lock. First would be a padlock which would involve you finding out what the code is (there is another slight variation of this). Usually the codes are local to where the door is; there is normally a clue to help you solve it. The second type of lock has you finding a nail and bypassing some moving tumblers. The third lock sees you using a lock pick and involves you moving the tumblers into position. You also have some locks that involve spinning a series of disks to create a set diagram, the answers are shown in various ways. Finally, you have two types of junction boxes which you need to connect a current to open the door. These are not the only puzzles available but do make up a majority of the game. The rest can be anything from putting cogs in the right order so they all move, to playing a game of ‘Lights Out’.

Each level that you play involves you rescuing a series of people. The mid-level people are usually insignificant and the only difference when saving them is that additional areas are unlocked. The main characters at the end of the levels are not optional, though, and these puzzles (depending on your difficulty setting) can be quite difficult.

For the most part the gameplay is enjoyable and normally the puzzles get more complicated the further in you get. Some, however, are annoying and you will more often than not find yourself scratching your head to work out what the solution is; this inconsistency is a bit daunting at times. Even though the puzzles are generally as different as they can be from one to the next, it can get a bit repetitive.

Eye-SAW
The main characters in the game are well modelled, although some of the standard enemies do look quite samey. The environment features a combination of derelict buildings crossed with warehouses and does set the scene and the atmosphere quite well, but it seems a bit endless and unrealistic. The graphics are very dark given the nature of the game, which helps present it well. I have to recommend that it’s best played with the lights out to get the full effect. 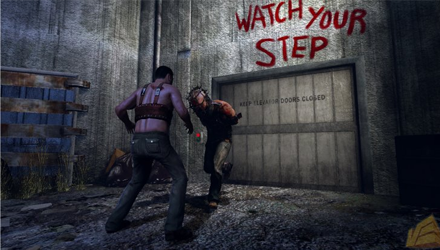 The trick is reading the writing on the wall...

Buzz-SAW
Sound quality is imperative in a game of this type; it’s what creates the tension and the fear, and Saw II does have it down to a fine art. So much so, that it’s probably one of the best features in the game. The dialogue is also admirable, but even more than that, the background audio is what really makes your brain tick. When walking through corridors you hear pipes crack, screams and other sounds that just add to the effect. When the pressure is on or under a time limit the ticking sound puts you on edge. All this is accompanied by familiar music from the Saw franchise.

He came, he SAW, he gonna go bye-bye…
Having now spent quite a bit of time with the game, in all honesty it can be quite fun at times. The biggest problem with games of this type is that they only appeal to a select audience. If you are a big fan of the franchise or you like horror games then you will probably like the game, even with its repetitive nature.

My main concern is that people who hate graphic horror and gore will be instantly turned away from this title. This is a title that will shock some people, but that’s what the game is supposed to do. It is also a game that you couldn’t get away with playing around children due to how graphic it can get when things go wrong. The puzzles can be challenging but do get tiresome and frustrating at times, which will also put the wrong type of gamer off. Finally, because the majority of the actual gameplay uses quick-time events, you don’t really feel like you are in control of any of the action like you were in the first game. If you like the films then go get the game, hell pick up the first game too, but if you aren’t that interested but fancy some scares, try it or pick it up when it’s a lot cheaper.