Splatterhouse, as you can perhaps tell by the name, is a great game for all the family, involving messy but fun art projects like watercolour painting and making finger puppets. Yeah, right. Splatterhouse is the foulest, most despicably vile filth I have ever had the fortune/misfortune to put in a games console. Developed by Namco Bandai, it is essentially a remake of the classic 1988 arcade game of the same name; a side-scrolling beat ‘em up with over-generous lashings of blood and gore.

The transfer to 3D and modern-day standards hasn’t changed the essence of the game much; if anything though, it’s made it even more gruesome. Imagine the infamous Gears of War chainsaw slice, over and over and over again… for around ten straight hours and you’ll get a pretty accurate impression of what’s in store here. The question is, however, after a thorough disembowelling, has Splatterhouse actually got enough guts on offer to make it a worthwhile experience?

A tale of terror

Splatterhouse’s story is a little silly and over the top, but to be honest it suits the game well in this regard. You play Rick, who visits his university professor Dr. West at his house, with his girlfriend Jennifer. Shockingly however, it turns out that the good Doc’s creepy mansion in the middle of nowhere is in fact a dangerous place to be, and West nicks off with your girlfriend, leaving you in a pool of your own blood, slashed apart by his unearthly minions.

Thankfully, a friendly demon-possessed mask starts talking to you, telling you to put him on and save your life. On doing this, you are transformed from a weedy little nerd into a beefy monstrosity that looks like he’s been living solely off protein shakes and ‘roids for the last few years. With the help of your new manly physique and the badass powers bestowed upon you by the ‘Terror Mask’, you set off through creepy and/or disgusting locations to get your girlfriend back, and stop the end of the world while you’re at it. All the mask asks in return is that you keep him well topped-up with bountiful supplies of the red stuff.

Welcome to the house of fun
It’s times like this that I regret linking my Playstation ID to my Facebook profile, with an up-to-date feed of all the trophies I’m earning. I often wonder what my auntie, cousins and casual acquaintances must think of my proudly displayed accolades of killing an enemy with my own dismembered arm, or splatting a hundred different foes on the walls, for instance. 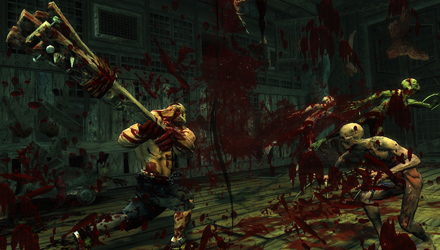 A lot of games have gory content; in fact it’s what has caused a lot of the controversy surrounding video gaming in the past. Splatterhouse takes it to the next level however, by making the violence a core, essential part of the gameplay. Not only does it earn you most of the achievements or trophies, but slaughtering enemies as brutally as possible rewards you with a refilled special attack meter, and each unit of blood shed essentially acts as an experience point that you can spend to unlock new moves. If that wasn’t enough, you often cannot progress without spilling enough claret, or impaling the specified amount of cretins on spikes.

This glorification of savage violence and bloodshed will obviously not be to everyone’s tastes. Then again, if you don’t know what you’re letting yourself in for with a game called Splatterhouse, consisting of a monotone blood-soaked cover and ‘The unmistakable sound of tearing FLESH’ emblazoned proudly on the back, you’re a bit of a numpty. The walls, characters and even the screen are gratuitously showered in gallons of blood during the game’s proceedings, with limbs scattering everywhere, ready to be picked up and used as makeshift weaponry. When your enemies are weakened enough you can perform a ‘Splatterkill,’ very reminiscent of the Mortal Kombat Fatalities, usually resulting in them losing a head, appendage or internal organ or two.

I was pleasantly surprised by the combat of Splatterhouse. It doesn’t feel quite as shallow as you’d expect, with a dearth of combos and special attacks at your disposal, letting you perform fast combo moves or heavy-hitters, regenerate health, grab and swing your foes around, or transform into ‘Berserk mode’ to really go all-out. There is also a variety of weaponry including body parts, planks of wood, meat cleavers and chainsaws. Fighting feels very satisfying (perhaps partly because of the over-the-top visual feedback) and unlocking new moves and bonuses with experience points is a nice touch, similar in style to Dante’s Inferno. 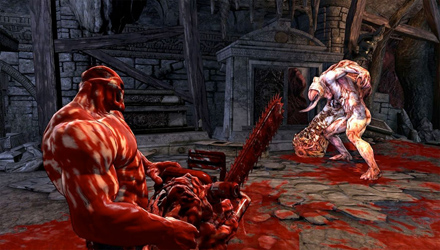 Towards the end of the game the linearity and repetition can start to grate a little, however, with the tight, restricted levels offering less free-roaming than a prisoner of war camp. Progression through the levels is also quite uninspired, with movement mostly confined to one room at a time, requiring you to kill a boss or a certain amount of minions before you can move into the next, and so on. It’s a relief that the combat is good fun then, because it’s certainly the main focus.

One aspect that does freshen it up is when the game sometimes goes old-school and becomes a side-scroller like its predecessors, but this is arguably for the worse. The original Splatterhouse and its two classic sequels are in fact even present in the game as unlockables, which is a great bonus for fans of the originals, but to anyone else they seem like utter tosh around twenty years later. When the new game emulates them it’s quite dull and frustrating, with some platforming elements included that often see you plummeting exasperatingly to your death. 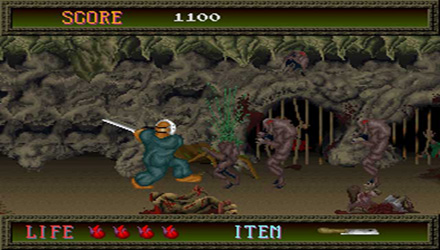 There's a reason that games aren't like this any more... they're bollocks

Death is usually a frustrating element of video games anyway of course, but this is most certainly the case in Splatterhouse. This is thanks to the dreadful loading times, which are terribly slow even when it’s simply respawning you in the same level, and even on normal difficulty the game is quite hard and will see you dying quite often. To be honest, unless you like a challenge I’d probably recommend the easiest mode as it’s arguably more like the ‘normal’ mode of other games.

A bonus side-quest of Splatterhouse, that may appeal to some genders more than others, is of collecting and putting together scraps of torn-up pictures left by your girlfriend, Jennifer. These provide all the computer-generated boobies you could ever wish for and they certainly aren’t hard to find, with the levels being pretty small and basic. I’ve got to feel sorry for the heterosexual ladies that may want to play this game though, as I couldn’t imagine putting together pictures of other men with their tackle out being much fun.

A beautiful bloodbath?
Splatterhouse’s graphics are adequate enough for their purpose, even if the colour palette does mostly consist of just red and grey, and a ton more red. It’s all a little bland looking and a bit rough around the edges, but at least the frame rate benefits nicely as a result. The action onscreen definitely gets a bit hectic with hordes of enemies, yet the game chugs along nice and smoothly. Better to be drab and functional than a pretty slideshow. 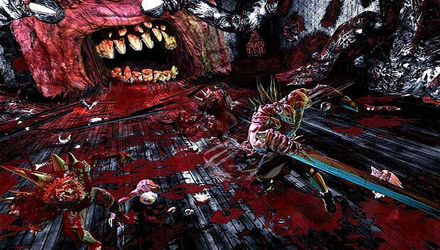 One of my major complaints is the interface, which consists of some really low-res sprites on the heads up display. I don’t know if this is a ‘clever’ move made on purpose, to give a nod to its classic arcade roots, but I don’t care; it looks damn fugly.

“This is why we got an M Rating…” Terror Mask
The visuals department isn’t particularly exciting, but Namco Bandai have at least done a nice job of the sound in Splatterhouse. Heavy metal fans in particular can rejoice, because that’s what the soundtrack solely consists of. You can shove your poncy Metallica and System of a Down though, because the game instead opts for metal closer to the ear-bleeding, God-scorning end of the spectrum. ‘Apocalyptic Havok’ by Goatwhore, and Mutant Supremacy’s ‘Morbid Dismemberment’ are some examples of the delights on offer here.

If you’re not a fan of death metal and similar genres, then you’re gonna hate the game’s music, and will probably want to reach for the mute button within a few minutes. Luckily for me, I am a definite fan so I personally loved it, and on playing Splatterhouse it’s hard to disagree that it’s suitable music for the game. Guttural growls, screams, and heavy guitar riffage blend perfectly with the visceral grisliness on display, and there are suitable amounts of bone-crunching and flesh-ripping sound effects to accompany this. 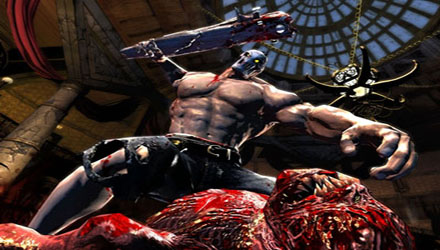 Another highlight of the sound is the voice of the Terror Mask, which is a brilliant addition, regularly spouting bloodythirsty catchphrases, crude remarks and generally acting as Rick’s loveably evil conscience. What makes it is even better is that this barbaric, vulgar character is voiced by Jim Cummings, voice actor of Tigger, amongst many other Disney cartoon characters!

A horror of a game?
Splatterhouse is what it is; a foul, offensively violent, unadulterated, damn good fun piece of entertainment. I expected a superficial gore-fest that was all bark and no bite, but was pleasantly surprised to find a well-built combat system and basic, but solid and focused gameplay hiding under all of the entrails. That said, it’s not the prettiest beast out, it hardly reinvents the wheel, and is plagued with some generic and stale game design in places.

It’s also not going to hold your interest for weeks on end, being of a fairly brief (but now commonplace) length, and lacking multiplayer and not offering much of a desire to replay the game (although there is a Survival Arena mode tacked on). Splatterhouse is a fairly decent blast while it lasts though, and will undoubtedly hit bargain bins in no time at all (and can already be sometimes found for the magic £17.99 tax-exempt price point). For that reason Splatterhouse is probably worth a shot as a cheap and cheerful pick-me-up for carnage-lovers everywhere; just don’t bother at full RRP.