‘Games as art’ is a phrase that is catching on a lot more of late. With luscious visual worlds, scarily lifelike facial animations and bright, vivid colours, it’s not hard to see why. However, it’s not just high-end PC’s and current gen consoles dishing out the quality, the mobile market is also in on the trend, and doing its part equally well.

Never is that more true than with Super Crossfire from Radian Games.

Space Invaders… with a twist
Super Crossfire sees you in control of a small ship that moves along rails at the top and bottom of the screen. Your objective is to destroy all of the flying crafts in the middle of the screen, which vary from Purple Crosses, to flying saucers and shielded vehicles. Your ship is continuously firing, and all you need to do is move the ship along the rail either by sliding your finger, tilting your iPhone or making some slight button presses.

However, the twist comes in the form of warping. With a quick double tap on your iPhone screen, your ship can change its position from the top and the bottom of the screen at any time. This is especially useful if the bullets of the ships firing back at you are converging into a hailstorm of pain!

It sounds simplistic, but genuinely, this is one of the most entertaining experiences I’ve ever had on a mobile device.

Wave to the Waves!
Super Crossfire is made up of five chapters, each split up into thirty waves. Once you’ve started the game, it is recommended that you upgrade your ship. You only get 10 points to begin with, and you can spend those on things like Ship Armour, Ship Speed, Bullet Spread etc, but after every five waves, you’re given an opportunity to spend more points and to further develop your vessel. If you’re not into that style of play, you can set it up so the game does all this for you automatically, but I’d highly advise you not to. There’s a greater strategic element you’d be missing out on, and one that could potentially be the difference in you getting through a wave or dying by it.

Super Crossfire is a rare game that makes full use of the small screen it is placed on. By warping between the top and bottom, all the while watching the path of the enemies and their firing patterns in the middle, you’ll constantly need to be on the alert, and ensure you’re ever vigilant and ready for an attack.

When you kill enemies, they drop small gems, which should be collected by the player. These gems will max out your Super Boost, which is an extra powerful weapon that can be used in a fight. Think of it as a Phaser Mini-Gun. The best bit is, this can also be upgraded. You can also collect power-ups as you play by destroying small spaceships that float across the screen. There are several different types of drops, their appearance is random and they all vary greatly. One acts as a pause button for the enemies, freezing them in time, making them easy to kill and without retaliation. Another power-up places a shield around you for a limited time, making you immune to bullets. To collect these, you simply need to warp through them.

Without doubt, Super Crossfire plays most effectively when you use the Slide Control Scheme. Button pressing works, but begrudgingly, whereas tilt is extremely stunted, and nowhere near as fluid as a game like Monkey Ball. Simply sliding your finger across the screen, however, feels very natural for the game and unequivocally, it is the most responsive method. 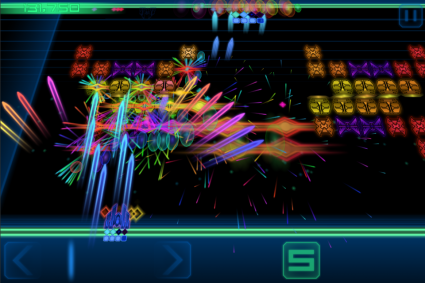 Tron but without the bikes
The visual style of Super Crossfire is truly spell-binding. Your iPhone screen will glow with glee every time you fire up the game, and will dazzle you with bright colours and neon lights. You know that the game has been designed purely with these intentions in mind, but you won’t care. Super Crossfire will melt your heart and your brain with its alluring sci-fi menus and dazzling firework display like presentation.

One of the most attractive iOS games I’ve seen this year.

Bring Da Bass to tha Punk
There’s a nice mix of Drum n Bass and Techno in here, but also blurred in with an old-school 8 Bit Arcade feel. As a result, Super Crossfire not only feels, but sounds as if it would have been welcomed into a loving home in an 80’s Arcade, but would have wowed its subordinates with a 21st Century feel. The mix of the two styles really blend well together, giving us the feel of something very retro, but styled with a dazzling new coat of paint. Exactly the feeling you get whenever you play it.

Super Crossfire is wonderfully suited to iOS and Mobile Devices, and is an absolute joy to play every time. Sensational!