Namco Bandai are well known for the Tekken and Soul Calibur games, along with some all time classics such as Pac Man, Galaga and Dig Dug, however these aren’t their only accomplishments. As with any good Japanese developer, they have their own stake in the RPG genre. The ‘Tales’ series of games are Japanese-RPG’s that ooze style and class. They have always taken their biggest influences from anime and manga and also use popular artists to design the characters and produce the animated cut-scenes within the game. Tale of Vesperia is no different; it’s the 10th mother-ship title in the series, incorporating everything that has been done well in the previous titles, making it even better and wrapping it in a design that is beyond stunning.

Once upon a time there was a…
At the beginning of the game you meet Yuri, a guy always trying to help those around him, but this attitude tends to get him in to trouble. When an artefact called a ‘blastia’ is stolen from the poorer area of town that he lives in, he chases down the culprit only to be imprisoned in the castle himself. Deciding that he needs to continue to chase down the thief he escapes from the prison running into Estellise, a noble trying to get to Yuri’s friend who is in danger. The pair continue their escape from the castle while being chased by the Imperial Knights and embark on an adventure bigger than they initially realise. After meeting up with Yuri’s friend Flynn, who is a captain in the Imperial Knights, the plot thickens. The fate of the world is put into play and the only person that can stop it all from being destroyed is the cocky criminal. 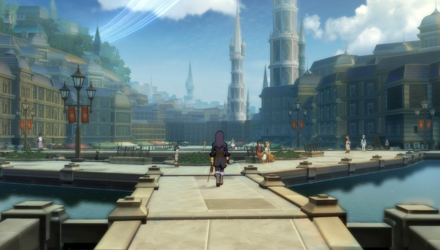 This place is huge!

Enter a large new world!
Once escaping the city at the beginning you are put into a free-roaming environment, although some areas have to be unlocked through the story before they can be entered. As you travel you unlock skits between the characters which vary on depending on the situation. Some of them tell you about the back-story of the characters and their thoughts as they travel together, others are general chit-chat. These are optional to watch but they serve for the character development aspect of the game and give some additional insight to the story.

‘Tales’ also has three difficulty settings, so if you’re finding the enemies too hard you can take it down a notch on the game options without the need to start again. You can also choose how you control your player in battle, this really only affects the targeting and the special moves. If you choose the ‘auto’ setup then your moves will be picked at random and you will always run to the enemy and attack without having to navigate towards your targeted opponent. Semi-auto also makes you run to the enemy when attacking but you get to map your special attacks. Manual mode is the hardest to use; you map your moves like in semi-auto but if you just hit the attack button you won’t run to your enemy and you have to navigate yourself; you have full control over all movement. Depending on how you set up you will get a bonus at the end of each battle, this is accumulated throughout the game but is used for unlocking your moves and weapons once you finish the game and start again.

The battle system is very simple to get to grips with, you have one button for standard attacks and another for special attacks. Depending on what direction the left analogue is facing also determines the type of action. Later on in the game you can also map special attacks to your right analogue, and there are special moves that can be done in the rush mode (rush accumulates through the damage you deal to enemies and can be released when full) and single-hit finishers that can be unleashed with a timed tap of the right trigger. Your HUD displays the health and MP of each of your characters and your special moves (called ‘artes’) use up your MP. This is recharged either by using potions or accumulated through battling without using artes. The battles endings also change (unlike a lot of J-RPG’s) and are all light-hearted and mildly amusing. More battle endings are unlocked as you gain more characters and it’s also dependent on your four-man party. 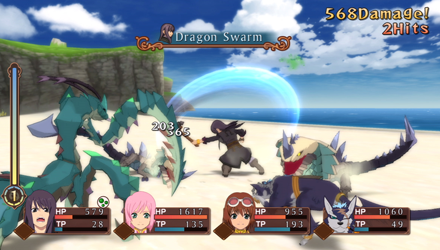 As you collect items throughout the game you can go to a shop and synthesize a variety of items; weapons, armour, as well as additional special items. The special items are specific to certain characters and bear no battle bonuses. You can also collect character titles by doing certain things or talking to certain NPC’s. You can also unlock these by completing side missions, and some of which unlock new costumes for your characters. If you change your sword or secondary weapon your character also changes his/her appearance to suit, so there is some flexibility on what you look like throughout the game.

The remainder of the game involves you wandering about the world, towns and the different landmarks, making your way through the story and talking to the various characters. There are tons of things to collect and unlock if you like that sort of thing.

Check out the ‘animation’ on her!
The graphical style is that of an anime, all the FMV cut-scenes have been well produced and are done in 2D animation. The remainder of the cut-scenes and the gameplay are rendered in 3D, but almost looks 2D due to the thin black outline around all of the characters, giving a sweet cell-shaded look that at certain times looks just as good as the FMV. The merging between the animations and gameplay is noticeable at first but becomes less obvious the more you play. As you explore you find that the entire world has been artistically designed and there is an air of consistency all the way throughout; everything looks beautifully executed. All the characters have also been well designed and the attention to detail is clearly visible in both the gameplay and the animations. 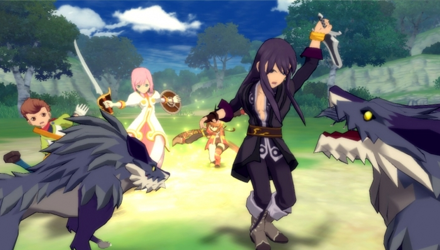 Can this game get any better?!

Can you hear me… am I coming through?!
The score is what you would expect from a typical J-RPG and changes depending on your locations and vibe of the situation. There are a whole host of music styles within that accompany the game really well. Each town and city has its own personality and theme which blends the game nicely. The characters are voiced fantastically, and the skits are no different and help bring the characters to life. The whole game isn’t voiced, and sometimes you will have to do some reading but nearly all the major story points are voice acted.

What are the scores Marjorie Dawes?
This game is full of excitement and you can tell that a very dedicated team of people have put it together. Being only the one disk I would have expected the game time to be around 35 hours long, but by just mostly doing the story I was pretty much at 55 hours upon completion, without doing most of the side missions. The story is gripping and the game is just bright and beautiful. There is a lot more to do than meets the eye and even when you complete the game there is still more that you can do including a whole host of side quests and extras. The price is a small one to pay for so much quality and I guarantee that you will have a lot of fun playing this. If you have never played one of the previous titles this is a good starting point.