The Sims is a bit of a craze that’s mostly passed me by over the years. Prior to sampling The Sims 3 more recently on PC & Xbox 360 (thanks partly to my wife’s ongoing obsession with the series), my previous experience was restricted to just four hours on the original, back in 2000. I spent those four hours in my late-teenage years absolutely pleased as punch, modelling my Sim with my own traits before carefully crafting my dream home with all the mod-cons, and living life the way I’d always dreamed. It was at that point I had a sudden realisation; it wasn’t my life! Gutted, I shut the game down and never returned to it. Hey, if I wasn’t living the perfect life, then why should virtual me?!

Obviously, in the time between my first experience with the series and the release of Sims 3, it has gone on to have phenomenal success worldwide, becoming one of the best-selling video-game franchises of all time. Because of that (and also partly because the franchise is owned by EA), it’s a title that you can own on practically any format, so it came as a surprise to no one when it was announced that The Sims 3 would be a launch title for the Nintendo 3DS in March.

With some Sims 3 playtime still fresh in my mind, I decided it would be a decent opportunity to see how the game fared in transition to the small-screen…

Sandboxing in its purist form…

So, as you probably know, in the Sims you have no set story, and no set objective. You tell your own stories by creating a Sim (or as in other iterations, a family of Sims, if you so wanted), and then guiding them through life however you see fit. You can take a back seat and let them get on with the finer points of life (usually resulting in chaos!) or you can take a more direct approach, interfering in their lives and bossing them about. The fun comes from experimenting as much or as little as you like, and just seeing what happens.

Unfortunately, that fun takes a lot more work to come by in Sims 3 on 3DS. Obviously, it has been cut down a hell of a lot from the full game, and I’m reliably informed that while, admirably, it’s a totally different game to the standard DS version, it still lacks some basic features. As a result, it suffers from some bizarre design choices that can only point to a game rushed to match the console release date. 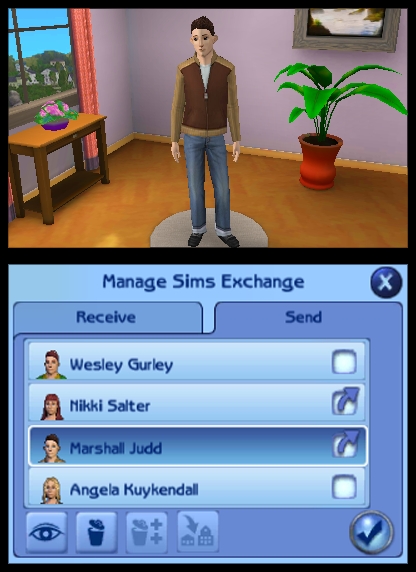 Watered down creation tools, but you can exchange Sims with others!

Thinner than water
How much the game has been cut down is apparent the moment you hit the character creation screen. For example, there are only two body types, skinny or fat, and the available haircuts, accessories and clothing options are reduced somewhat. You can, however, make use of the 3DS’s camera to let the game create a Sim based on your appearance, but it didn’t really bring any great results to the table for me; I just ended up hitting the random button until it best fitted the look I was after.

What’s also strange is that you can only create one Sim before playing. You can’t create a family from scratch, nor can you just take over an existing family like you can in other versions. It’s a really strange choice, as for a game that’s all about experimentation, it limits you an awful lot initially. That said, as you build relationships, you can eventually add people into your household. It just takes an age to do so, and I’ll be explaining why very shortly.

Onto the actual gameplay. Firstly, I have to admit that the control scheme works rather well. On the top screen you have your normal Sims view showing the close-ups of the action, the angles and distance of which can be altered via a little virtual analogue nub on the touch screen.

On the bottom screen, along with all the usual HUD elements, is a bird’s eye view of your property. You can either drag your way around the map using the stylus or, my preferred option, use the analogue stick to navigate around. You can then click on anything to bring up a menu and get your Sim to interact with it, much in the same way you would in any other Sims game.

Unfortunately, it’s not all plain sailing. While for the most part it works nicely, and makes the buying and building aspects in particular a joy, you’ll find that it can be unexpectedly finicky at times. For example, I had trouble placing a PC on a desk because there was a chair in front of it. Silly of me really, for thinking that someone would want to sit at a PC, but once I moved the chair out of the way, plonked the PC down and then put the chair back, it was fine.

There are some weird cuts from the game too. When things break, and they will a lot, you can no longer just call a repair man to come take care of it while you get on with things. This means you’ll be spending an awful lot of time fixing things yourself, rather than doing the fun stuff that the game has to offer. I did find a way around this: you need to level your Sim up in the important areas, such as handiness, which will speed up the repair process and therefore free up your time. It’s not ideal, though, when you want to go explore the relatively small area of River’s Bend.

It also makes the management of relationships nigh-on impossible, as you never find the time to invite your friends over to build on anything but an introduction. It makes the game feel more about plate-spinning than actually seeing the consequences of your actions, which is a large part of what draws people in. 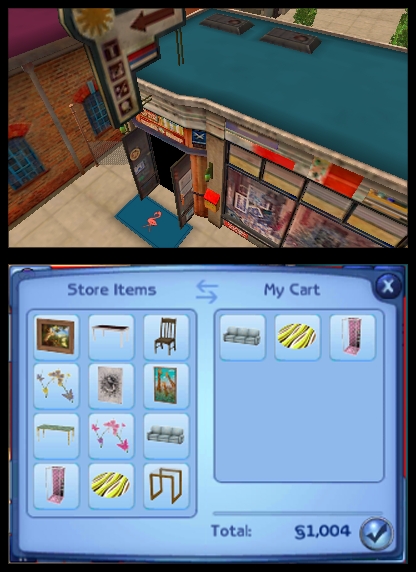 'Meal for one!' You'll be spending a lot of time on your own in this version...

When I did manage to get someone in the house to befriend or make a move on, I found the process a bit laborious thanks to what I can only explain to be glitches. By this, I mean my Sim would suddenly find this amazing free-will and ignore my instructions, in order to do whatever menial task he wanted. If I told him to tell a joke, he would somehow cancel my selection, walk off and read a book instead, even though his stats were showing him as perfectly happy. Because of this it took ages to build any kind of friendships, which was a total pain when trying to test how the game would handle with more than one person living in the household.

The Karma system that was introduced in the big console versions also makes it in, but again, it’s all cut-down greatly in spite of inventive implementation, and is mostly restricted to negative actions. To use them, you need to build up enough Karma points by fulfilling wishes, and then you can click on the destructive option you want to use. When you do that, you need to follow the context-based actions, making good use of the 3DS’s features. For example, to active an earthquake, you’ll be rocking the console back and forth, or blowing into the microphone to create a storm. Nice features, but ultimately useless unless you like torturing Sims.

Finally, one of my favourite features, ironically, is the one that occurs when you’re not even playing the game: the Streetpass connectivity. Passing people who are also playing the game will populate your town with their created Sims. A nice feature that makes up for the lack of DLC or the online store found in other versions. 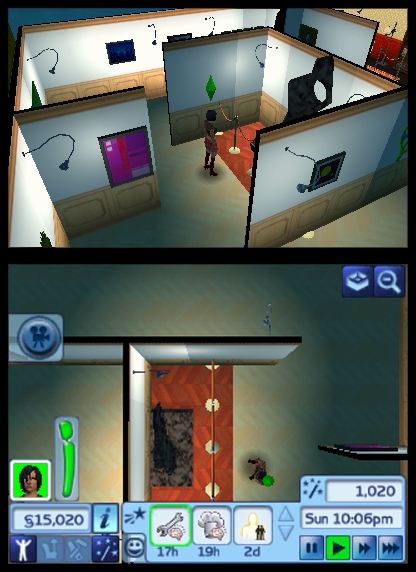 Stuttering Sims…
The visuals in Sims 3 on 3DS do the job without ever really wowing you. The textures are pretty plain and in some cases non-existent, while the character models are just about up to scratch. It does, however, have that famous cartoon feel that’s suited the series so well. At a glance you can instantly tell which game you’re looking at, so it does succeed on some level.
Unfortunately there are some gripes to be had. The framerate at times is shocking, and unlike some of the other games on the console, this is not dependant on whether the 3D slider is up or down. You’ll find other occasional glitches here and there too, with pop-in or flickering polygons.

The 3D effect is probably the game’s major saving grace visually, because in all fairness it’s pretty awesome. It offers a great field of depth in the locales you’ll visit as you navigate your way through your virtual life, and at times you do feel like you could actually reach into the screen. It almost makes each location seem like a little movie set in your hands. 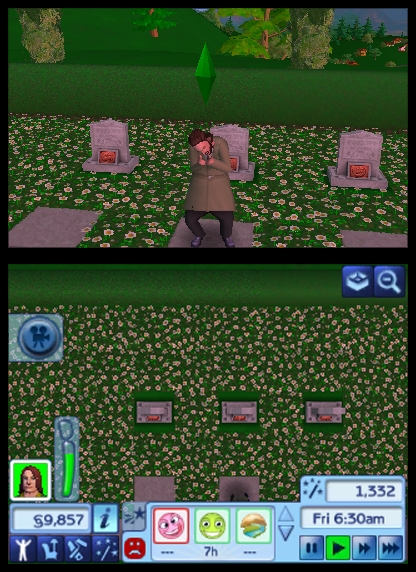 Do you speak Simish?
There are no real surprises when it comes to the audio either, if you’ve happened to play any of the previous games. The backing track to gameplay usually just consists of standard household sound effects (toilets flushing, people knocking on your door etc.), while the gibberish bullshit that the Sims class as a language decently mimics the sound of people chatting. The recording quality on the 3DS is clearly lesser to that of the main ports, but it sounds polished enough to be pleasant as you play.

The music that accompanies the game is also unchanged from the ‘full’ title on PC & Xbox, complete with the as-ludicrously-catchy-as-it-is-terrible theme that drills itself into your brain at every opportunity. There is some decent audio recognition for the action too, such as the ominous noise that occurs when something bad is about to happen (such as a burglar breaking in), or the satisfying little chime you’ll get when you achieve one of your little dude’s wishes.

Fun at times, but maybe not worth the Simoleons…
Okay, so here’s the thing: The Sims 3 on 3DS is not a terrible game, but it’s far from the best shape we’ve seen the series in. There’s definite fun to be had that’s typical of the franchise, but you have to work twice as hard to find it, simply because of everything that’s been taken out. While the other issues that plague it stop the game from being that essential 3DS purchase, hardcore fans will still probably find some value, as will those who are in desperate need of a new game for the system and have no other options.