In a nutshell, Torchlight is the self-assured offspring of World of Warcraft and Diablo. Not surprising, considering a lot of the development team behind the game worked for Blizzard on the original Diablo games. For those that may not know, this was a real cult classic on PC back in 2009 and for good reason; it’s a throwback to the RPG’s of old and blends the very best elements of the genre together into one package.

So surely we’re guaranteed a quality release on Xbox 360 with that kind of pedigree? It would certainly seem that way, although, there’s always the danger of trying to port games such as these onto a console that they will suffer for the translation, be it an issue with frame-rate, controls or things having to be taken out of the game.

So, after many hours of extensive play, This Is My Joystick asks the question, is Torchlight everything we hoped it would be?

Brighten up the darkness!

The town of Torchlight has been built on top of massive ore reserves making it a real breeding ground for miners. One of the minerals below the town is known as Ember, an ore which offers powerful, magical qualities to anyone who harnesses it. Naturally, this makes Torchlight very interesting to adventurers and evil alike. With such rich opportunity abound, your character is called to Torchlight, hoping to obtain some Ember for themselves. However, upon arriving in the town, your character witnesses enemies that dwell in the mines have entering the town and started attacking the townsfolk. Fortunately, a sage by the name of Syl has also come to Torchlight and fends off the creatures, defending the civilians before anyone is hurt. She approaches your character and asks you to help her find her mentor, Alric, who has disappeared into the mines. Being the heroic sort (not to mention that you’ll be right where the Ember veins are!) you decide to help. However, as the character ventures deeper into the mines, they start to learn the ugly truth about Ember and the real secrets it conceals, the deeper underground from Torchlight you go. 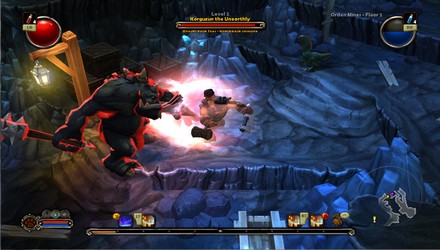 Pick a class…
There are three character classes to choose from in Torchlight, each with differing abilities. There is the Alchemist, the Vanquisher and the Destroyer. Being the type of reviewer I am, I decided to go the least menacing sounding class and picked the Alchemist (don’t worry though, my character still kicks butt!).

There are three talent trees per character class and each of them works on a different area, whether it be more defensible properties or working on the DPS (Damage Per Second) of your spells or attacks. Of course, a natural mix of all three trees will help balance out the character in all areas, and specialisation in one tree will make your character more effective in that field. This method of gameplay will be familiar to anyone whose played WoW or even the likes of Dragon Age.

Even though each of these character classes are unique in style, each character class is also blessed with a pet. You can choose between a Lynx, a Wolf or a dragon looking creature. In addition to helping your character fight in battle (particularly useful for the Alchemist and Vanquisher as they can serve as a tank) they can also take items you collect in the dungeons, return them to town and sell them for you! You’ll quickly find that your pet is as important to your game progress as knowing which button to press in combat. 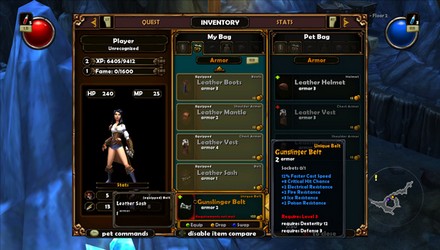 The menu screen. You'll need to use this.

So what is Torchlight? Well, like all good RPG’s you’ll have to explore dungeons, fight enemies, upgrade your weapons, earn experience points and complete quests. What makes this a bit different from other RPGs is that the dungeons in the game are randomised, so it is unlikely that you’ll ever play the same game twice. The dungeons will have the same looking environments and the same enemies, but the way they are laid out will be completely different. You’ll usually find your way by using the mini-map, pulled up at the bottom right hand corner of the screen by pressing in the right thumbstick. If you press the thumbstick in again, it will enlarge and encompass the middle of the screen, making it easier to see where you are and where you need to go.

In addition to completing quests for people, obtaining XP and progressing the main story, there is also the Fame option, which enables you to raise your reputation throughout the land as a true hero. Fame is usually obtained by killing named enemies. As your fame increases, so will your opportunity to work on new quests, venture into more dangerous dungeons and face down even more fearsome foes than you’d dare dream.

Torchlight absolutely struck the same chords with me as Diablo did back in 1996, and while I didn’t find the same iconic imagery I’d come to expect from Blizzard’s marvel (such as the Butcher’s blood smothered back room) I did find myself hopelessly engaged and entangled in Torchlight’s world.

I imagine many people’s fear about the port of Torchlight to XBLA would be about how well it controls. Well, I have to tell you, the key-mapping on the pad totally works and the game feels like a natural fit for Xbox 360, which is a rare find in this day and age as ports of games from PC regularly suffer. You will map spells or attacks to the main keys, Y, B, LT and RT. For example, I assigned an electrical bolt to RT and a Fire bolt to LT. It will be important to diversify your attacks as some enemies will be immune to a particular type of attack, whereas they’ll be more susceptible to others. Torchlight proves you can have a deep, entertaining role-playing game experience on 360 and make it feel as natural as if you were playing it for the first time on PC.

Unfortunately, one thing lacking from the 360 edition of the game is a form of TorchED which has proved very popular among PC users of the game. TorchED is a tool kit which allows you to modify the game, creating add-ons, new weapons, enemies, etc. That said, it’s easy to see why implementing this onto a 360 title would have proved quite a feat for Runic and would have halted the development time even further, although it still doesn’t quench an insatiable need for customisation. 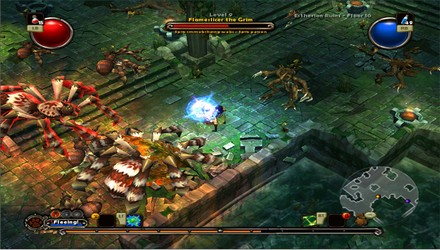 The graphics have a cartoony feel to them (somewhere between WoW’s buoyancy and Borderlands cel-shaded anarchy), but they definitely don’t shy away from the gore and the creepy. You’ll find all manner of entities in Torchlight, from roving rats with pickaxes, to zombies and fully formed dragons. Even the environments you’ll find vary from dwarven cities to abandoned dungeons.

The game has a three-dimensional feel and while you’ll spend most of your view situated from the top down, by a simple tilt of the right thumbstick you can zoom in on the environment and look at your character and his opposition up close and personal. The game doesn’t look too much differently from the PC version, although Runic have used animations from Torchlight 2 in this port, improving the character animation and the mini-map. Pretty good indicator we’ll see the sequel on XBLA then, eh Runic?

Sadly, despite how well put together the package is, there are discrepancies. Most notably, there is a frame-rate issue with the game, and once there are more than seven to eight characters on the screen at once, the game becomes instantly choppy. Having not played the PC game myself, I can’t say if the same issue was true there, but unfortunately this can freeze the game for a few seconds, causing you a lot of damage or even killing you before you have a chance to react. However, this rarely crops up as you play the game, so it’s not an issue that will plague you too often.

The bards play my symphony
Torchlight has a very distinct sound. While it manages to create a real majestic fantasy feel, it also blends in some country-like elements. The result is something both captivating and unusual. On the one hand, you may find yourself humming along and on the other, you may not even like it at all. The music was composed by ex-Diablo composer, Matt Uelman, so players may once again notice similarities between the two games.

The game also features some elements of voice acting with Lani Minella (famous for hundreds of different in-game roles) heading the charge. All in all, Torchlight has an authentic, unique fantasy sound that can certainly haunt you outside of your game time.

To the death?!
There’s no way around it. Torchlight is excellent and is one of the most gripping, and compelling purchases you can make on the arcade today. 1200 points it may be, but this is money well spent, and you can rest assured that your money will be invested in a game that will quite easily dip into time spent in full retail releases. Had it not been for my love and affinity for Beyond Good and Evil, this would easily be my pick for ‘Game of House Party’. This is one of the most definitive RPG experiences on Xbox 360 and with only the notable, disappointing lack of local or online co-op (although Torchlight 2 seems in a position to rectify this), dips in frame rate here and there and a thinly veiled story that is altogether quite forgettable, this is a certifiable hit that definitely deserves a place in your game library. More of this please!