Back when I was a child, home consoles were a thing of science fiction, and computers were the size of cupboards. We spent our summer holidays playing football in the park, or at home around the houses and gardens of our neighbours. The only guns we even dreamt of firing were plastic, and fired caps or bits of potato.

On those rainy days you couldn’t get outside, one of my favourite past times was playing ‘Toy Soldiers’. I would spend hours lining up the little green men across the rug or the dinner table, creating a hill with a bowl under the table cloth, and playing out the biggest, loudest, most intense battle known to man.

Last year Signal Studios released Toy Soldiers to XBLA; a game, I admit, passed me by despite receiving some pretty positive reviews. Now they have released a sequel, Toy Soldiers: Cold War, which takes the same tower defence gameplay of last year’s original, and just ramps up the testosterone a little bit. Question is, can Toy Soldiers be a Top Gun, or will it blow cold?

War, huh, what is it good for?
As mentioned, Toy Soldiers is a tower defence game that sees you taking control of the US Army, against their Soviet counterparts. The “story” is pretty thin on the ground, but basically your mission is to defend your base against a tide of Soviet attacks, over a series of ever more challenging levels and an influx of jets, bomber planes, tanks, infantry and attack helicopters. As the man in charge of protecting the good old U S of A against a pending nuclear attack from the communists, you will have various weapons and vehicles at your disposal to manage or control as you see fit.

Love is war
The main single player campaign takes you across eleven levels in total, in which you have to defend your toy box against multiple waves of Soviet attacks, and the odd boss battle. Each world has a number of build sites from the start; small circles or larger squares, for you to place weapon turrets. In order to do this, you select the build site by moving the cursor and pressing ‘A’. You can open the placement menu at any time by pressing ‘RT’, and then cycle through your options with the left stick.

Turrets can be chosen from the standard machine gun, anti-tank, mortar, anti-aircraft, or artillery. An additional crazy makeshift option can either be toxic gas, a flamethrower or a Roman candle. The latter of these has the soldiers manning the turret run around a wheel like hamsters, setting firecrackers off that melt any plastic nearby.

Each turret has three levels to unlock, each with a bit more power and accuracy; as you progress through the levels you will need every last one of them. Obviously the smaller build sites can’t take either of the two larger weapon turrets, anti-aircraft or artillery, so you need to plot your placements carefully if you want to win the war. 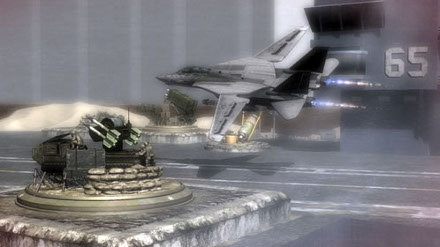 Once you have placed a weapon turret, it will automatically fire on any enemy unit within range, or you can select it and take aim yourself. Kills earn you cash, which you can use to either upgrade your turrets (assuming you’ve unlocked the next level), or repair them.

Each level has four challenges, which might include reaching a certain level combo, or getting a number of kills with a particular weapon or vehicle. Achieving these along the way will lead to unlocking the upgrades to each of the weapons, or earning medals that ultimately lead to points and Achievements. Should you take control of a weapon turret, you will often find that its power and accuracy is increased. It is from here that you will pick up those multipliers, which lead to the upgrades, medals, and my personal favourite, the ‘Barrage’.

The Barrage becomes available after taking out so many units in quick succession (which is easiest to gain with the simple machine gun against infantry). Once received, a simple press of the ‘Y’ button calls in your support. Over the course of the campaign you will unlock various barrage options, such as bomb drops, fighter jets and a nuclear strike. Personally, however, none of them measure up to the one open at the start of the campaign, the ‘Commando’.

There is only one word to describe the Commando Barrage, and that is ‘awesome‘. Up pops your very own Rambo complete with rail gun, bazooka and cigar, and you can wander around the level putting holes in anything that moves (or doesn’t, for that matter). The Commando is hard as nails, enjoyable to control and truly destructive; the only downside is that the Barrage doesn’t last very long.

Finally, as you progress through the campaign you will receive some battery charged vehicles you can take control of, including tanks, choppers and fighter planes. The vehicles are a bit more effective against the attack waves overall, and obviously give you the freedom to explore the level, and take the fight to the enemy. Each vehicle has limited battery life, and you need to make sure you get it back to its charging station before the battery dies; fail to do so and it explodes. You can collect battery charges as you go round the level to prolong the time in-vehicle, and they will regenerate after a short period if destroyed. 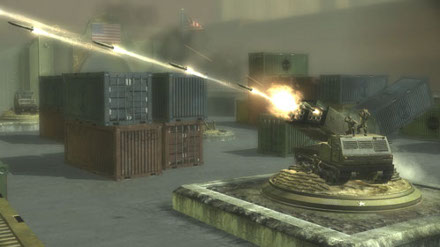 Attack is the best form of defence.

Beyond the campaign, there are two additional single player modes. Firstly Survival, which as you’d expect, has you face wave after wave of Soviet attack. There are three difficulties to choose from, which alter the rules of engagement ever-so-slightly. The Classic mode is just endless waves of attack, Lockdown means you have to purchase your build sites, and Hardcore means you cannot repair a turret or replace an exploded vehicle. This mode adds an additional level of challenge to the game, and serves to prolong the life of Toy Soldiers beyond what is ultimately a fairly short campaign.

The other option is a selection of mini-games, which put you behind the weapon of a turret in a short lived, but enjoyable, target practice. This might be a literal target practice, or a slightly more inventive option of shooting as many flies as possible, or taking out some on-rushing Soviet cowboys. The mini-games act as a light bite, and a change of pace to the other modes. In all honesty, they are little more than a distraction.

Star Wars
Visually, it has to be said that there are some brilliant touches which really add to the experience. For example, the controllable units have a wind-up key in them which rotates as you move around the arena, and both the heli-pads and tank-holding station recharge units are lovingly recreated as well. Vehicles on the whole look good, as do the infantry as they come steaming forward.

The battlefields themselves are well thought out and structured, and each level has the battlefield within another area, such as a bedroom or on a desk. The odd stray object is scattered about, such as tape, a vodka bottle or Coke can, which serve as makeshift obstacles. Again, these small touches just add to that childhood playtime feel, where you would just use whatever you could find to build the battlefield.

War of the Worlds
As with the visuals, the sounds are solid and immersive. The explosions tear through your speakers, and some of the cameo infantry noises are great; as you control a turret, reloads are met with a variation of “Cover me, reloading”. The tanks, choppers and fighter jets offer the appropriate engine noises, and returning to my favourite, the Commando, some of his sound bites are just pure classics.

Background music is limited to between missions and in menus, taking the form of what I would classify as 80’s war-movie style, complete with electric guitars (I’m sure I’ve heard the Top Gun theme). 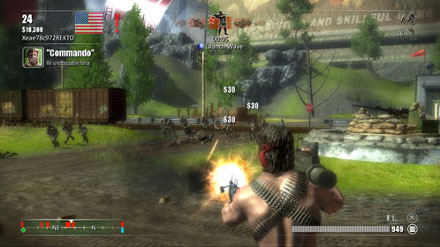 Your very own Rambo...

The people’s war
You can play through both the campaign and the challenges in co-op should you desire, but the main multiplayer mode is Versus. This pits you against a human opponent, with one of you taking control of the USA, while the other has the Soviets. The general gameplay is the same, but as well as the defensive weapon turrets you can also buy offensive waves. Each side also has a Commando (or Ivan in the case of the Soviets), and as a side quest to destroy your opponents toy box, there is a contested build site fairly centrally in the map that you can try and capture with him. You can also purchase battery-powered vehicles to control in the attack, and regardless of any waves you send, you will have a regular group of infantry that attack your opponent.

Versus mode can go one of two ways in my experience. It can be a long, drawn-out tactical battle where both sides try and build a half decent defence, before unleashing a mass of waves against their opponent, or more often than not, a quick all-out dust-up. During this kind of battle, it is not unusual to have two or three attacking waves from either side in very quick succession. You will be darting back and forth between different turrets, trying to get the best defence, while also looking to use the Commando in order to really fight back.

To say there is a lot going on is an understatement of the highest order, and I have to report that I have been the victim of the odd bit of lag during these moments. It doesn’t affect every game, and it by no means gets to the point of having a negative effect on the outcome, but it is there.

War and Peace
I’ll be honest; I didn’t expect a great deal from Toy Soldiers: Cold War, and I have been pleasantly surprised. What we have here is a genuinely enjoyable blast, that offers a decent challenge and some light hearted, enjoyable play from start to finish. The levels are well structured, the difficulty spike is fair, the bosses are immense and the weapons and vehicles are simple yet fun to take control of.

It looks good, it sounds good and it plays exceptionally well. As I desperately try and find some flaws to balance the argument, I can think of a handful of occasions of slowdown in the single player, a touch of lag in multiplayer, and one moment when the game crashed on the second phase of the final boss. These in no way take anything away from the overall experience. You simply have to: