The inevitability of Kinect, despite all of its promises, was that it was going to cater to those who want to indulge in a fitness regime. The trend began with the Wii and Nintendo’s introduction of Wii Fit and has since spiralled into dozens of different titles on to multiple formats. Whether you like it or not, there’s a market for fitness games on computer systems and it’s not going away anytime soon.

Your Shape: Fitness Evolved is Ubisoft’s first attempt at translating that formula on to Microsoft’s new motion sensing peripheral, Kinect. With the ability to track your motions in new and exciting ways, did this work the way they intended?

Let’s get this out-of-the-way right now; with the introduction of Your Shape and Kinect, your Wii is going to be permanently relegated as a second place fitness instructor. The only thing Kinect can’t do right now is measure your weight but that’s not stopping you from going outside of the game (using YourShapeCentre.com, more on that later), using weighing scales (god forbid) and then putting it into the game yourself. Wii Fit was revolutionary and the introduction of the Balance Board was ground breaking but what Kinect and Your Shape Fitness Evolved are offering is something much more extraordinary.

Let’s get physical!
When you stand in front of the Kinect camera in the play space, your outline is displayed on the screen and you are represented by a virtual silhouette on the screen which mirrors your actions. You will need to synchronise your actions with the virtual trainer provided for you and replicate their actions as accurately as you possibly can. This is where things get interesting. If the Kinect sensor and the game don’t think you’re compensating enough with an action, they’ll tell you by highlighting that particular part of your body in red. This gives you a clue as to what you need to improve on in this exercise, what you’re not focusing on and what you’re not quite getting right. As soon as that part of your body turns green, it means, as far as Kinect and Your Shape is concerned you’re doing the exercise right.

Of course, by getting one action right, it may mean that another part of your body has suffered and that has turned red. This is where Your Shape takes hold of the concepts and ideals introduced in Wii Fit and knocks them out of the park. The game is in a whole other interactive league that recognises the reactions of your body and really does force you to actually do the exercise being shown to you on the screen. With the Kinect sensor, there really is nowhere to hide, where as before using the Balance Board, there were ways you could cheat. I’m not saying you will not be able to cheat with the Kinect sensor given time but on a first impression, you will need to be at your best to get the most out of the game! Although, I did feel that sometimes while exercising I was getting the motions exactly right but the game didn’t agree. This could be a source of contention for some and may be down to the inaccurate detection of the camera or the game. Whatever it maybe, the game is generally accurate and responsive and only has the slightest of lag when your moves are projected onto the television screen.

The game has your typical workout routines for different styles of exercise, whether you wish to burn fat or build muscle; these can be customised or you can use inbuilt ones that come out of the box. You can also do Cardio Boxing and attempt it at a beginner, moderate and expert level. There are also Yoga exercises available and mini-games which are good for fast-paced fun!

Your Shape uses a calorie counter that tracks how much you’ve burned based on how well you’ve performed and shows you this throughout the exercise. Obviously, some workouts are going to be better for burning the fat than others but you can guarantee that unlike Wii Fit, when the game says you’ve burned ten calories, you’re really going to have to earn it. I could swear that I’d burned more like thirty after a work out on punching blocks with the sweat pouring down my face, yet the game was adamant that I hadn’t even gotten rid of ONE of those Rich Tea fingers I’d dunked into my tea earlier that day. This is an intense game that will definitely get your heart pumping. Just get a load of the Cardio Boxing, finish a full workout of that and stand there without a droplet of sweat on your body. I double dog dare you! 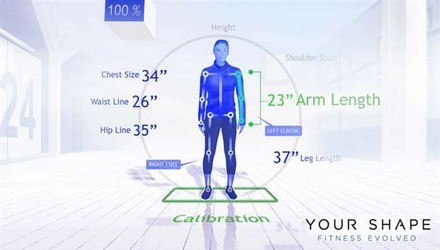 You input your measurements before you start working out!

Discs of Tron this ain’t!
This isn’t a graphical marvel by any stretch, it’s not going to showcase the full graphical powerhouse that the Xbox 360 can be. That being said, the visuals are an important aspect in your in-game development and ultimately, your exercise regime. The game has a sort of modern, futuristic feel to it which almost makes you feel like you’re living in the World of Tron.

I feel it’s also worth mentioning that the menu system in Your Shape is very creative, perhaps the most creative and interesting of the launch line up. The menu is placed around your silhouette and is based on the measurements that were input into the game when you first booted it up. The idea is that you just reach out and touch the option that applies to you, making it as easy as possible for you to get into your mode of choice. Whenever you twist your body, the menu will turn with you. If you bend, it will also move. It’s absolutely brilliant and is a real showcase for what can be done with the Kinect tech. 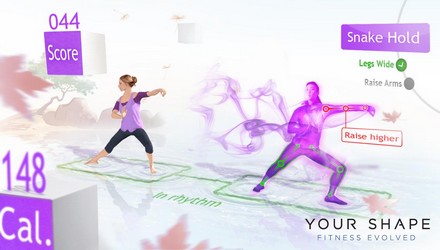 Shape up or ship out!
Imagine a fitness trainer shouting commands out at you and telling you off for getting things wrong: If that’s your idea of fun and games, then Your Shape has it all ready and prepared for you out of the box. The trainers will offer you hints and tips as of how you can improve your attempt at an exercise, the type of feelings you should be experiencing when you’re doing the exercise right and even just to commend you if you’re doing well. The game even has the music locked down for when you’re doing Yoga style poses trying to relax and unwind. Obviously, this isn’t a key point to your gaming experience and doesn’t really contribute all that much to the overall product but what’s in here is well-tailored and suited to the actions demonstrated on-screen.

Working together
Synchronised sweating is the way to go! It’s great to see that Your Shape does allow you to get competitive with friends with scoreboards and calorie counters. There’s a series of mini-games you can play in against your friend. Dancing, ball based games, breaking blocks and the hula hoop (which proved, by the way, that Wii Fit just didn’t get my hip swivelling as I had a much higher score on this, so neh!). I wish there was more variety and the game offered you more opportunities to compete with your friend as what’s on offer is really good but not diverse enough that it’ll sustain your attention for too long. Still, it’s good fun.

Not particularly to do with any multi-player but also cool is the Your Shape Centre, which allows you to input all of your information on to the web so that it can track your full work out process. This tracks you to see if there is weight loss, which exercises you’re particularly good at and which you’re not. This is a lot more elaborate and detailed than some other fitness efforts on the market today and really adds a sense of longevity to the product, as well as validity to show it really is a solid working tool for the potential athlete within. 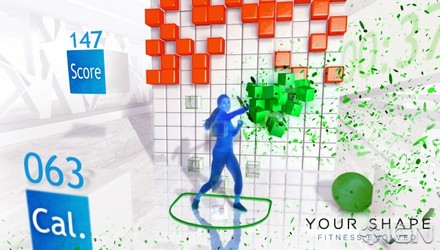 Arguably the most fun game on the disc!

Worth a work out?
The groundwork has been set out and Your Shape is now the standard-bearer. It is obvious things can improve from this point on but it’s very clear that things have changed and evolved radically for the better. Fitness in gaming will never be the same again and I’m actually excited to see just what the future holds.

This proves that Kinect nullifies the Wii. It eradicates it from your memory and exposes it in multiple ways. Your Shape and Kinect hold the future to fitness and will definitely help you burn those excess calories. This is an example of evolving technology, of progression and the ability of today’s developers. There are things Your Shape could do differently, there are ideas it can add (I’ll elaborate on this in my review of ‘The Biggest Loser’ as THQ have taken another approach which is also brilliant) but as a first effort fitness title from Ubisoft, you really couldn’t ask for much more. Ubi understands Kinect, Your Shape suits the format perfectly and is guaranteed to help you lose weight (believe me, this game will make you sweat!).

If you bought Kinect to lose weight or even if you didn’t and fancy a game that will get the heart pumping, don’t look any further than Your Shape. It’s not perfect, not yet, but it certainly opens your imagination to the possibilities ahead…