There’s no series that gets my fingers tingling quite like the SoulCalibur games. Why, you ask? Well, it’s rather simple. After picking the first one up when I was much, much younger I fell in love with the characters and what they had to offer. The originality of the mechanics, such as odd swords and unfeasible simulation may seem stupid to some people, but the stretched imagination really fits well with my inability to endure reality for a long period of time.

Oh, wait, this was a review wasn’t it, not a look into the workings of my psyche. My point is that I managed to get hold of SoulCalibur V, and while my personal life took a bit of a tumble (down Mt. Everest), I did get a chance to play it. Does the game live up to the past series? Let’s take a look.

A sword of the ages
So there’s this sword, and it’s pretty bad, or bad-ass depending on your stance, and it’s called the Soul Edge. Why is this sword bad(ass), I don’t hear you cry? Because wielding it gives the owner an incredibly large amount of power, but slowly steals their soul in the process. Fair deal, right?

To counter this, many years before SoulCalibur V, the Soul Calibur was crafted; a sword to directly oppose the Soul Edge, and together they would destroy each other’s power for a certain amount of time, until someone seeks out the Soul Edge once again.

We join the Sword’s journey in the 1600’s with SoulCalibur V, following Patroklos and Pyrrha, the son and daughter of series veteran Sophitia. Both having been lost to each other for some time, Patroklos has been spending his time attempting to locate his sister, fulfilling tasks for Dumas, who has him set out to destroy the malfested, a type of suffering pain inflicting humans.

At the same time, Pyrrha, who has been kidnapped by Tira. Tira recognises that without the influence of the Soul Edge, Pyrrha would die. Using this to her advantage, she has Pyrrha kill man after man, slaughtering the very people attempting to save her through harsh manipulation, that readies her heart to wield the Soul Edge.

While fighting games and storylines don’t always mix, there is a deep lore behind the SoulCalibur universe, which I could go on about for days. I won’t bore you with that here. The depth is rich and invigorating, and behind the button mashing front lies an interesting story just waiting to be told, if you give it the time.

The best thing is that no background story is really needed to understand what’s going on. You can jump into the story that SCV has waiting for you and understand it from the get go. Obviously knowing the previous games storyline will allow for further knowledge, and you’ll understand the hat tips to characters, but nothing that would prevent you from the enjoyable experience it is. 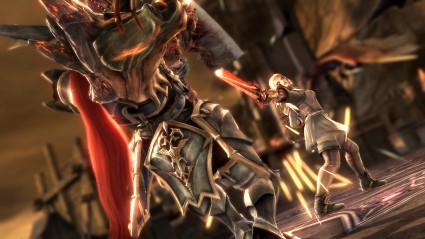 Pyrrha is being manipulated!

Swing it. Swing it good.
If you’re new to fighting games, you may want to take a look elsewhere. SoulCalibur V comes in with guns blazing as far as the controls are concerned. With odd twisting thumbsticks and button combinations that could very well blow your mind, you may be left a little perplexed if this is your first taste of this particular series.

That being said, the game doesn’t overly penalise new players. Whilst you won’t be able to complete any of the legendary status fights, you’ll probably be fine going through the story mode and finding your footing there. On the other hand, don’t expect the game to provide everything you need in this basic mode.

There is a slight difficulty curve present in the story mode that will test your skill to an extent as you progress through the chapters. The real challenge comes when you attempt to take on what the game has to offer afterwards, which is an Arcade style Legendary mode, where you’ll face off against characters that are considered the best of the best, and aren’t they just itching to prove it?

Legendary mode will have you throwing controllers, ripping hair and screaming like you’ve never screamed before. SoulCalibur V offers a full body workout without the use of Kinect! Revolutionary! Despite the numerous losses, you’ll be wanting to finish it. Even if your controller is held together by duck tape by the end.

Being able to tackle story modes, arcade modes, training modes and online features means that the game won’t leave you hanging after the last boss. There are plenty of characters to perfect your art of choreographed button slamming, as well many new features to awe in, such as the Critical Edge, which will, if performed correctly, allow you to deal mega damage to your opponent, completely turning the tides of battle.

More and more games are featuring these, but SoulCalibur V’s is the most balanced I’ve witnessed so far, allowing for a turn of the battle if the player is skilled, but not quite doing enough damage to make lesser tiered fighters take over rounds without much effort involved. 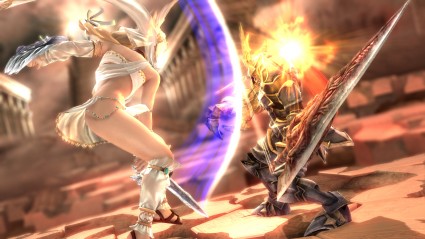 That’s a mighty fine breastplate you have there.
As per usual, SoulCalibur features some fantastic graphics that will leave you wanting more. Every character design detailed down to the last ribbon, with a huge set of customizable options to add unique characteristics in the Create section. Level design will make you drool, and possibly forget the heat of the battle in awe, fighting in scenic locations relative to the story.

Unfortunately, that’s as far as it goes. While the graphics are brilliant, and updated to current day standards, it doesn’t bring anything new to the table, bar some extravagantly designed Critical Edge animations. Whilst the layout has already been set for in past games, there was possibly room for some improvement, something a bit different, for the new characters to not so blatantly represent past ones.

That being said, unless you really think about it and dwell on it, it’s not anything that’s going to stop you from being immersed.

AIIEEEEEE!
Voice acting. Oy vey. I have to go straight here first because despite all its great plus sides, SoulCalibur have never been able to deliver on the voice acting. The most convincing character in this game is Pyrrha, and she’s so frustratingly annoying that you won’t be able to play with her for a long period of time.

The over-confidence peppered with a side of bravado leaves some combat feeling… lame. There’s no other way of putting it. Some huge epic sword fest with a fraction of your life left can set a huge mood, only to be ruined by an exaggerated teenager talking about food, or a 12 pack machine growling about how he needs more power.

Luckily, it’s one of the only downsides to the game, and if you’re a fan of the series, you’ve come to accept this, and either ignore it, or laugh at it. The music itself is involving and deep, with each cry of anguish and sword manoeuvre satisfyingly juxtaposed with a beautiful sound effect. 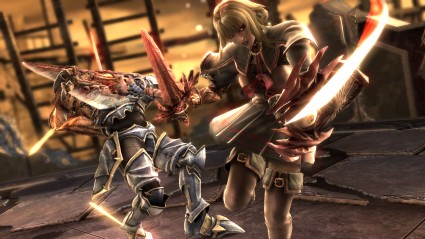 Let’s throw some punches. Together.
Let’s be honest, Online is where fighting games are really starting to shine, and SoulCalibur V takes it to the next level.

We have the standard online matches, where you’re paired randomly with online players, or can set up a room for you and a few friends that will allow some basic chat and fights amongst yourselves. This is the norm now, for sure, and most games in the genre coming out without some platform to bust open your buddies kneecaps are severely criticised.

Coliseum is where this game excels itself above the rest. Upon entering the Coliseum, you’re put into a room of fifty other people, all of which are displayed via their card; a customisable tag to personalise your online presence. Upon looking through the stats of each player, you can chose who you’d like to fight, as long as they’re available to do so, and slowly make a name for yourself in the room.

While Ranked matches aren’t available all the time, only about twice a month, it’s not too much of a problem, as the Coliseum provides enough entertainment to keep you going. Placing your card for a Random match will never get old, with an almost endless amount of skill and talent to put yourself up against. The Coliseum allows for a community to be created through the online modes, something many games completely forget about. Online allows us to connect, yet we’re flung into one-off battles with people we never see again, but not here.

The addition of ‘Soul Link’ also helps to define you as a player. Link yourself to three other people, which will constantly follow them, and update you on their own progress. Do this to friends if you want to, but more importantly, Link yourself to your rivals and watch their progress. If they’re getting better, it means you need to train up a bit more. 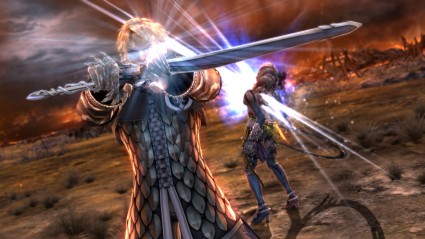 Fighting isn’t good, kids, it’s great.
SoulCalibur V is a fighting game through and through, but more than that, it’s a fighting game done right. Instead of trying to wow with spectacle or include game breaking mechanics just to be different, care has been taken to make sure the game isn’t overbalanced or unfair. It sticks true to its roots of a fine genre title.

While I’m certain I would love to see something more come out of the series, possibly some more attention on making the story longer and more involving, what we’re presented with isn’t far off hitting it square on the head. The game is solid, and is familiar to the series without being tedious. We just need to hope that Soul Calibur VI doesn’t continue the trend to a point where we’re getting a re-skinned game.

That, and fix the voice acting. Please?!