Tekken has truly become the fighter for the modern-day warrior. Sure, Soul Calibur V was a huge release earlier this year, and the crossover with Street Fighter was a big deal, but this has always been the jewel in Namco Bandai’s crown.

After a long, arduous absence, dating back as far as the PS2 launch, Tekken Tag Tournament is back, but is it still the greatest show on Earth?

Think of the Tekken Tag series as a spin-off of the numbered instalments. The entire premise is catered towards putting together ‘dream-matches’ with the ensemble cast of warriors featured throughout the franchise. Ever wanted to pair Yoshimitsu and Roger? Dream no more. Always wanted them to put the knuckles to Jin and Eddie? The wish is your command.

It’s all about creating the ultimate battle and you’re in control of it. 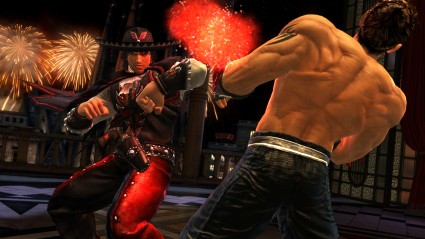 Tagged you in the face, mofo!

War of attrition
Obviously, the defining characteristic about Tekken Tag is the ability to tag. Similar in vein to Marvel vs. Capcom, players make up teams of two and square off against each other in a best of three match-up. This is handled simply with the tap of the LB button.

The entire Arcade mode can be played this way, or if players are feeling particular decisive, they can just go through the competition as a sole soldier. However, it’s entirely possible to find themselves up against the wall in handicap matches should they choose this route.

The campaign is mostly straight forward until the final battle. I won’t spoil it here as it marks the return of an important character in the Tekkenverse, but I will give you a piece of advice: Underestimate at your peril, no matter the difficulty!

Tekken Tag 2 allows a lot more customisation than ever before. There’s the Pair Play mode which allows four players in one game, each controlling one character. Players can also take their character of choice into the fitting room, and completely customise their appearance, from hair to shoes.

A new feature in the series is something called Tag-throws. This allows a multi-person effort to break down an enemy, whether it’s a combination of a suplex and a dropkick or something else. Tag-combos are also introduced allowing major-league pummeling using each individual character’s unique abilities. Naturally, this makes multi-hit combos unique to the pairing players have put together.

There’s also the Fight Lab, which is like a self-contained story mode that teaches the game to new players. Players assume the role of a robot who has to perform set moves against virtual warriors in order to progress through the stages. It’s a pretty neat addition, and is guaranteed to make a better player out of anyone.

Tekken Tag 2 plays like a charm and remains entertaining whether it’s your first or thirtieth playthrough. The variety always makes the title refreshing and there’s a real sense of individuality featured among each of the game’s diverse roster of 50+. It’s a testament to how illustrious Tekken history truly is. 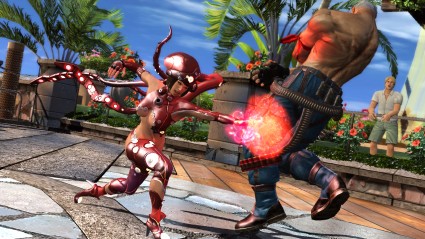 One in the nads is worth two in the face.

Boxing kangaroos, you say?
As you’d expect from such a wide-ranging roster, the stages are an assortment of insanity and artistic awesome.

Player’s combatants will be clashing knuckles while set against winter wonderlands, neon-lit nightclubs and dank, dark caves. There’s even a Snoop Dog centric stage, tied in with the exclusive Snoop Dog developed track, ‘Knocc ‘em down’.

The game is really beautiful, squeezing out the absolute max of the 360 and PS3, and providing an amazing experience. However, this does present some hiccups during play. A few times the game has actually paused itself for a few seconds as it waits for a character to perform a special move or just to throw a simple kick. While not game-breaking (and something I’m sure will be ironed out in an upcoming patch), this does present frustrations when in a crucial last-stand.

Tekken Tag 2 is also fully available in 3D, though unfortunately I didn’t get a chance to check that out.

Sound of the underground
It wouldn’t be Tekken without taunting, and that’s absolutely a massive part of Tekken Tag 2. In fact, all characters now speak in their native tongue when spouting off taunts. This gives Tekken Tag 2 a real flair of authenticity never seen in any other game in the franchise

Tekken Tunes is also a new feature for the series. This allows players to change the music played on different stages and even import their own should they so choose. Again, this is a real cool, novelty feature, that proves just how much Namco want to make this the most user-orientated Tekken game yet.

As ever, the music is always dynamically suited to each stage, and represents them perfectly through the means of sound. 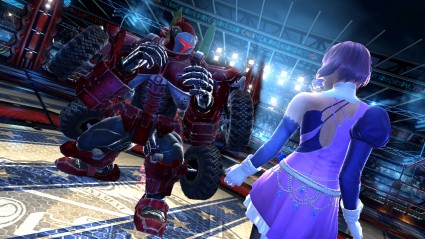 Shouldn't you be in Fall of Cybertron?!

Community combat
The online element of Tekken Tag 2 is just as good as couch combat. While there was limited player availability, and so I didn’t get to sample this extensively, when I did get a game it played pretty seamlessly throughout.

New to Tekken Tag 2 is World Tekken Federation. This is an all-encompassing social hub, which enables players to track their stats, their friends stats, leaderboards, create their own teams and even enter online competitions. This goes live on launch and will likely explode once everyone begins their online campaigns.

Tekken to the next level?
The beat-em-up genre has been evolved so far that many wonder if it can still surprise and deliver. Well, Tekken Tag 2 can and does.

Tekken Tag 2 is good, co-operative and competitive fun that keeps managing to surprise players little by little along the way, but still delivering the core fighting experience we’ve all come to expect as a series standard. Fist-clenchingly fantastic.