The Legend of Zelda: A Link Between Worlds

There have been a lot of calls for The Legend of Zelda series to shake up its trademark structure over recent years and although I always want to see innovation in the industry, I can’t say I was one hundred percent on-board in this instance. I don’t know why exactly, but I still find myself a little precious over this particular franchise. Irrational, I know, but when it came to light that A Link Between Worlds on 3DS would be used as a chance for Nintendo to experiment, I was very nervous.

It turns out that I needn’t have worried; this is one of the 3DS’s very best, not to mention one of the most pleasantly surprising games released this year.

A Link Between Worlds sees the Zelda series bravely return not only to its top-down roots, but also to the exact Hyrule map from the SNES classic A Link to the Past. Impressively and faithfully recreated in full 3D, old Hyrule looks fantastic in its new form, with new life and vibrancy breathed into every inch of the iconic map. Nintendo have also opted for a new-look Link here, his image more akin to his depictions in ancient instruction manuals than in recent outings. It’s smartly done, almost as if trying to depict Link as they wanted to in the 90s, but were unable due to hardware constraints.

In seeing Nintendo try to recapture the spirit of the 90s, it makes sense as to why Between Worlds features such a minimalist story. The beauty-obsessed and villainous Yuga travels Hyrule, transforming Princess Zelda and descendants of the original Seven Sages into paintings. While his true intentions are initially unclear, Link is tasked with recovering the captives and sealing the fate of not just one, but two kingdoms. I found it enjoyable enough and there are some interesting twists and turns, but fans accustomed to a more fleshed-out Link might pine for something a little deeper. 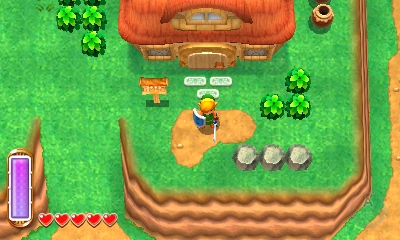 By not really acting as the sequel or remake you might have expected, Nintendo’s wistful re-use of the 16-bit Hylian landscape could be deemed as lazy nostalgia, but it’s a small gamble that pays off massively. As glorious as it was to revisit this world and reminisce, the sense of nostalgia was very quickly superseded by a sense of wonder as I explored these famous old areas in new and unexpected ways.

For the first time since the series’ inception, you’re free to tackle Hyrule’s dungeons in any order you want, and despite being really apprehensive about this, I found the reality rather liberating. As long as you have the right gear, you can get anywhere, and obtaining that gear is where Between Worlds really mixes up the traditional formula. Remarkably, you have access to nearly all Link’s arsenal right from the start thanks to an excitable entrepreneur called Ravio, who will lend you all the tools you’ll need – for a nominal fee of course.

This system not only adds a satisfying freedom not seen before in the series, but also a tangible consequence for death. When you die in Between Worlds, your rented items are ripped unceremoniously from your beaten corpse and you must head back and re-rent them if required. This is brilliantly implemented and raises the stakes significantly; there are fewer heart-stopping moments than when you’re under pressure with only half a heart left. You can actually buy Ravio’s wares later on to prevent their removal from your inventory, though they come at a hefty cost, while the infrequent manual save-points further prevent death from being the minor inconvenience we’ve seen in recent efforts.

For those worried that the rental system might soften the complexity of the dungeons, please worry no more. Between Worlds features some of the most devilishly intricate puzzles seen since the SNES era, and the set here are my favourite out of the entire series. Although the dungeons are a little shorter and puzzles aren’t always impossibly difficult to work out, no effort is made to point out areas of interest, so you’re left to feel your way around and piece all the various elements together yourself. You can acquire some ‘Hint Glasses’ along the way if you were so inclined, but even the help there is pretty subtle, offering only gentle guidance. Because of this, I found it deeply gratifying when a conundrum fell into place.

A prominent part of the new challenge comes when Link gains the ability to snap to walls and become a 2D living painting. This was the other feature that worried me prior to release, but it’s intelligently executed and completely changes the way that you think about Zelda puzzles and navigation in general. You can fit through cracks in walls, get into locked rooms and cells, or reach distant platforms by literally snapping flat to a nearby surface and walking around to them – you’ll find plenty of logical use for this unusual power.

This ability also opens up the passage to Hyrule’s shadowy inter-dimensional sister Kingdom, Lorule, which takes up a substantial chunk of your playtime in the brilliant second half. Getting to dungeons after this point often requires switching back-and-forth between the dimensions as you reach places not obviously accessible in one Kingdom. It’s a joy to find the correct routes in this fashion, and I loved not knowing what I’d stumble on next in the process. 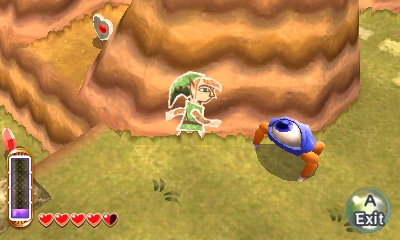 It looked crap in previews, but this ability is actually brilliant.

Aside from its obvious retro inspirations, Between Worlds is full of references from the series history. For example, will you spot Majora’s Mask? Will you recognise Dampé, the ghostly gravedigger from Ocarina of Time, alive and well in this Hyrule? It’s some of the most subtle but delightful fan-service I’ve seen, and it’s always a treat when you spot something new.

Probably the best example of Nintendo’s loving fan-service, however, is in the soundtrack; it’s practically a beautiful, lovingly made mix tape for Zelda fans. Remastered versions of not only A Link to the Past’s most memorable themes, but the best scores from throughout the series are featured, and the timeless melodies and tones are a constant delight.

The missing Link?
I will still argue until I’m blue in the face that Zelda’s traditional structure was never the ‘problem’ it had been made out to be, but it’s hard to deny that the new, free-roaming approach to exploration and dungeon conquering adds an engaging new take on the traditional formula. Because of it, A Link Between Worlds feels both like a familiar Link adventure and one of the freshest, most daring series entries ever made.

That mixture of nostalgia and innovation is a curious line to straddle, but Nintendo have done so delicately and masterfully, unexpectedly producing one of my favourite Zelda adventures in recent years. It might lack the grand scope and scale of a Skyward Sword or an Ocarina of Time, but it never lacks the wonder or ingenuity, always leaving me pleasantly surprised and smiling. What a pleasure.