Many years have whizzed by where hardcore gaming headsets have not really enticed me enough to buy one. With hefty price tags on some of the more popular headsets available from companies like Madcatz, Turtle Beach and Tritton, I have always cringed and asked myself ‘why would I fork out more money for something that in my case was just a multimedia ear warmer and does in my opinion the same job as your bog standard headset?’.

If, like me, you’ve made do with the bog standard, simple headsets or more to the point, any headset that has not created a black hole through your wallet over the years, then trust me when I say you need to upgrade and invest in a worthy headset that will not only improve your gaming experience but will also make the gaming god persona come alive within you. The Turtle Beach Call of Duty: Black OPS II Ear Force Sierra Limited Edition Headset, a mouthful indeed, is what I’m talking about amigos.

From the moment I tore open the box with anticipation, emphasis on the ‘tore open’ part, I revealed a mammoth task of getting my head around how many components the box had hiding away. Like a scene from Mary Poppins, ‘what will come out of the box next, a coat stand?’, the box was finally empty; however my table did look like R2D2 had just vomited on it. I remember looking up at my partner and saying ‘I’ll see you in the morning then’.

So what was in the box? First off, you’ve got the Ear Force Sierra headset, which is reasonably lightweight for a solid chunk of kit. Branded with Black Ops II insignia, it looks the business. Component cables are included so that you can get hooked up to the Xbox 360, PlayStation 3, PC and Mac. A Sierra control unit, which like a cat with kittens feeds the remaining wires, and finally in my eyes the ‘Pièce de résistance’; the touch-screen programmable control console. I say ‘Pièce de résistance’ simply because I have never seen anything like it before. Let’s not take focus away from the main piece, though, the headset, which is the ‘arc de triomphe’. 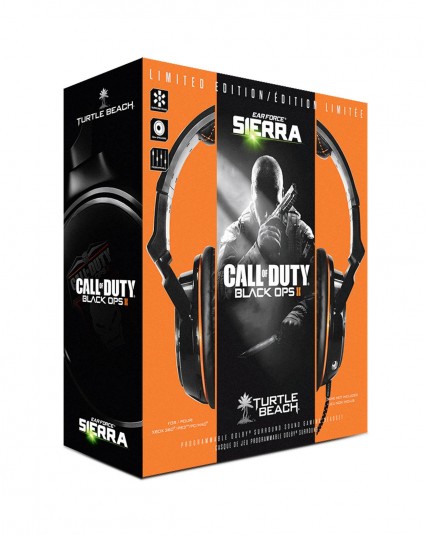 What’s in the box?

So after sorting through the wires and using my little grey cells to work out the set-up,  which was relatively straight forward to accomplish when reverting to the instruction manual once or twice, the moment had come for my Xbox 360 and I. I placed the Ear Force Sierra headset on my cranium like a king, and from the off my gaming environment swirled out of control, my face lit up like a kid at Christmas, and I was in a new world. The sound this phenomenal piece of equipment can hurl down your ear drums is mind-boggling,  not to mention it’s very comfortable. The ear guards prevent you from getting ear aches and the arc cushion takes away any pressure from the top of your head. I’ve had no discomfort from using it on a daily basis for about a month now.

The Dolby Digital 5.1 surround sound, voice morphing, sonic silencers, dynamic chat boost and all the high-tech components that are packed into this amazing piece of equipment are simply heaven for your ears, not to mention that the modes the programmable touch screen console unit provides are a joy to tweak to your preference. Whether this is adjusting the surround sound angles, controlling your voice morphing output or just simply controlling the level of chat with the level of background noise. Yes, you will have to adjust to your liking and this can take a few minutes of your time, but be patient and you will soon be able to enjoy gaming sound which you’ve been missing all these years.

When you’re playing a game that has a good level of action happening or a good atmospheric environment, so I don’t mean Uno, you will be hearing sounds like they should be heard, water will be amplified and give you a correct backdrop, guns and grenades will dispense a bass boosting thump to give you an exact battleground ambiance. Whichever game you unleash on the Ear Force Sierra headset, it will cope tenfold and will take your breath away. The Ear Force Sierra from Turtle Beach has improved not only my gaming enjoyment but my over all quality of gaming.

The Ear Force Sierra headset isn’t wireless, but if you have the room and you can cope with a few more wires snaking up your gaming space then it’s worth the extra space. The programmable console with its touch screen element is slightly too sensitive in my opinion, I have had one or two moments of frustration, accidentally turning my microphone off or changing chat channels whilst speaking with friends. Apart from that, though, my conclusion is that the price tag is steep but thanks to the excellent sound, comfort and great use of programmable tweaks, you should save up some hard-earned money and make your next buy a worthy gaming investment. The Ear Force Sierra from Turtle Beach has changed my gaming experience, you should let it change yours.