I remember the 3DS being introduced through reviews and articles as ‘an oversized paperweight’. While this seemed like a harsh judgement at first, the beginning months of the console’s life span didn’t hold out well. With it striving to prove it was worthy of being among the big boys, it released many titles, all of which promised different things and usually failed to bring them. Nintendo needed to be reminded that their consoles were sole contenders in bringing good old-fashioned entertainment.

Now here we have Zen Pinball, a fancy little download from the 3DS store, and a 3D port of the game that has featured on many other platforms. Perfect for an eShop download, the game provides a hefty amount of fun, but can it stand to contend against the big hitters currently on the field?

There’s no messing around here, and unlike many (failed) attempts beforehand, Zen Pinball doesn’t tie you down to some over-exaggerated ‘Pinball Tournament’ that is the be-all-and-end-all of some stupid catastrophe. Zen Pinball 3D is all about providing you with an enjoyable, no-nonsense experience.

Release the ball!
In fact, it does exactly that. The game provides you with four different boards you can play on, each of them including some sort of major perk, as well as differentiating in little nooks and crannies to where your ball can find itself. None of them seem to mimic the others in any way, leaving you with four very individual boards.

As such, they’re incredibly challenging. Not a pinball master myself, the boards provided an ample amount of entertainment. Flinging my balls (easy, cowboy) through as many holes (eaaassyy) as the board allowed me, proved quite fun. 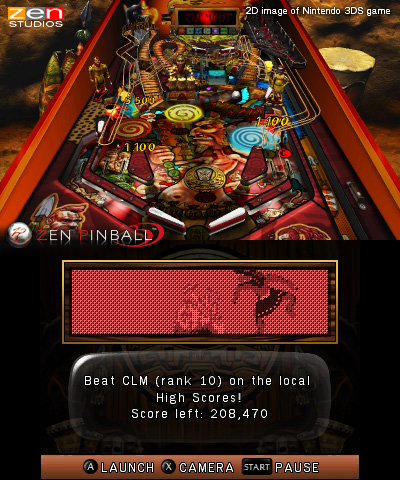 Continuing this trait for a little while, however, began to prove exactly how alien to the land of pinball I really was. After flipping around for half hour I started to actually concentrate on what I was doing to score some impressive numbers on the leaderboards. This was when I couldn’t quite follow what was going on.

I quickly learned that the key was to be ahead of the ball and predict where it was going, but the game moves very quickly, and the flippers are incredibly accurate. Hesitate for a millisecond and that ball is ricocheting off an unwanted shaman or robot, and your eyes can’t keep up. Lose track of that ball for too long and it’s an inevitable game over… unless you got a lucky save and are given another go, which happened a fair bit for me.

Robots, shamans, all accounted for… and beautiful.
One thing that did stand out for me is how beautiful I found the game. For a downloadable port, it fits the 3DS perfectly, with the 3D additions adding a depth to the game that allows for real integration with the console.

Whether a direct port, or tweaked with beforehand doesn’t matter; however, what does hint towards being copied and pasted from its console counterparts are the loading screens that take a little too long to load the game. Why am I including this here? I have a sneaking suspicion that the nice graphics have everything to do with said screens.

Unfortunately Zen Pinball also commits the cardinal sin of using the basic, bog-standard text that many DS and 3DS games do, namely the indie RPGs. This could be a personal gripe, but the style of text completely degrades the rest of the title, with the beautiful scenery being spoilt by blocky, unattractive font. However, the font is only used during menu selections, and not on the actual playing field, allowing for it to be forgotten about while you enjoy what the game has to offer.

The Pinball Wizard sound.
The game keeps giving. The one section I was pleasantly surprised with was the sound accompanying the game, which helps to increase the experience. Many downloadable titles include sub-par soundtracks and uninteresting audio, to the extent of tempting you to switch it off completely and turn the radio on.

Not Zen, however. The ported music seems to follow faultlessly to the 3DS. Clear voice-acting and crisp sound intensify what could have been a boring game to listen to, not only helping to heighten the exciting vibe that it brings, but to give it an edge that brings the pinball action alive.

I’d go as far to say that the sound in Zen is one of the selling points. A lot of thought has gone into an area that is usually left by the wayside in ports… and the effort has paid off. 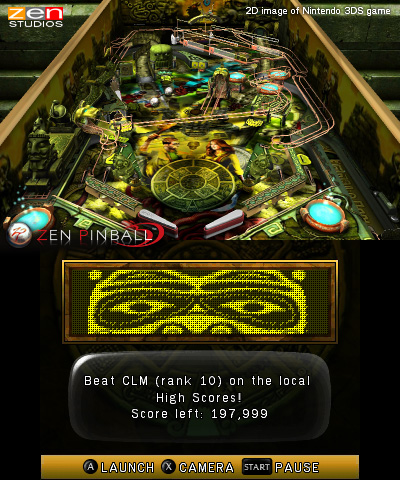 Flippin’ out. Together.
One of the areas it does fall down on is the multiplayer aspect. That’s what I thought at first, before realising that a pinball game probably doesn’t bring the biggest hitters to the table when it comes to multiplayer.

The leaderboards let players upload their best scores for each of the four boards online to compete against each other. Standard leaderboard stereotypes apply to this game just like any other; find that the highest score is something stupendously high set by someone who has obviously spent a little too long playing the game, and lose most of your drive to try and beat it.

That being said, if you’re the type of person who likes a challenge, then this is definitely the area for you. If you manage to get onto a first place position, I will personally record a video of me tipping my hat to you. You’re welcome.

The final flip
I’ll be completely honest, I wasn’t expecting much. Pinball isn’t a passion of mine, and I hadn’t heard of the series before, which probably made the surprise of being met with such an intriguing title even bigger.

For the cheap price, it’s a pretty good steal. It’s an ideal game to break out on the train, toilet, or during ad-breaks. Then, if you really want to beat that high score, you invest some quality time with the machine.

This nice element of duality makes it a target for both casual and hardcore players. Along with the smooth graphics, superb sound and simple, yet extensive gameplay, this means you’ll be left wanting more.

With all the hardcore games trying to impress the 3DS audience and show what the system is made of, Zen Pinball has slipped gracefully onto the scene and showed us what handheld gaming can really do: be smooth, crisp and thoroughly entertaining without trying to be too much of a spectacle. The game may be far from perfect, but it’s incredibly enjoyable nonetheless.