Casual games can be hardcore too

I wrote recently about how I prefer traditional handheld gaming on dedicated consoles to mobile gaming. My reasoning, in the end, came simply down to my preference of physical controls over touch-only. I stand by that conviction entirely; even if the core mechanics were identical, I’d rather play FIFA on Vita than FIFA on iPhone any day of the week, due to the feedback that physical controls provide.

I did, however, make a point of distancing myself from that delightful group of people that believe that mobile games can’t be ‘real’ games, due to the majority’s casual status.

I won’t insult anyone’s intelligence by quoting the dictionary definition of ‘game’, but no matter what the game, no matter how casual, how light or meaty; a game is a game is a game. If it’s electronic and entertains you, be it Words with Friends, Half-Life 2 and everything in-between, then it’s a valid game, regardless of your tastes.

What about when a game could be classed as both casual and hardcore, though?

I must admit, it’s not a thought that’s ever really occurred to me before, such is our industry’s need for pigeon-holing, though I was made aware of a game that fits that bill just two weeks ago, courtesy of two excellent articles from Brendan Keogh (a fellow freelancer from Australia). His articles in question can be found here and here.

The game is Ziggurat, available from the iTunes store for a paltry 99c/69p. After just a few plays, I knew instantly I had to write about, and that’s never happened for me with a mobile title before unless under obligation to review. 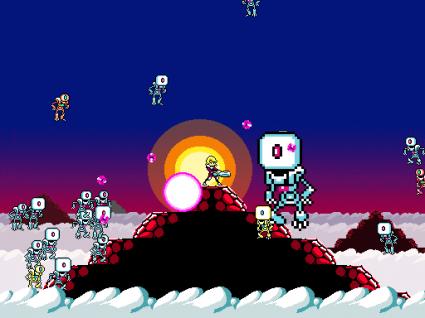 It looks easy, far from it.

The premise of the game is simple: You are the last human alive following an alien onslaught. Taking humanity’s last stand on top of a ziggurat with nothing but a plasma gun, you must simply survive for as long as possible. You will die, that’s inevitable, but you’re going to defiantly take down as many of the alien bastards as you can before they kill you.

The gameplay is even simpler; you never move, only controlling the last human’s shot power and trajectory with a single touch as the robotic creatures clamour and jump up both sides of the structure. You will only ever see one traditional ‘level’ (although it aesthetically evolves), and when you die, you’ll just restart and try and beat your score.

By that very premise, Ziggurat could be defined as a casual game, but its challenge and difficulty make it hardcore. There’s a vertical difficulty line rather than an upward curve; within seconds you’ll be swamped and desperately trying to tag everything that moves. Learning the subtle nuances and mastering accuracy through practice is vital, as only a shot in the eye will put foes down for good (and cause them to explode, possibly taking others out in the process). Because of the skill that’s required to get as few as a hundred kills (my highest thus far has been 120, my average nearer 70-80), there’s a subtle depth that’s not apparent on the first few tries. Attempting to master it and matching the game’s pace for even the shortest time is insanely satisfying.

With that, Ziggurat represents the perfect example of how a casual game can be made with a hardcore audience in mind. Its intrinsic simplicity allows you to jump in and kill a few minutes for instant gratification, but delaying the inevitable failure that we come to deem as ‘success’ can only come from the long game, through understanding, practice and skill. The very elements that define a hardcore game.

So, the next time you think about dismissing any given game based solely on its casual status, look a little deeper, you might find the ‘real’ game you’re looking for just beneath the surface.