I’ve been following the contradictory and quite frankly farcical things that the National Rifle Association get up to for a few years now. As a site we’ve written about them before, due to their-less than sensitive handling of horrific recent events. We’ve challenged their utter damnation; that video games are the devil and the single cause of all unexplained despicable murder. I maybe paraphrasing there, but I hope you get my drift.

I was recently sent a link by a good friend of mine, for a Huffington Post article about the NRA’s latest campaign that was effectively “guns for kids”. At first I was utterly dismayed; why would any kid need a gun? Not just a bright orange, space ranging, plastic dart gun either, but a real gun that shoots real bullets that can injure and potentially even kill? Marketing real rifles at kids in a similar way the tobacco companies of old told us that cigarettes were healthy and that kids should smoke them too.

It turns out that the NRA have a website for kids, featuring kids with real guns. To be fair to the NRA kids site, there is a button on there that runs a video featuring young boys and girls proudly holding rifles like they are part of some child militia, talking about gun safety. The video goes through the important things a rifle user has to remember. Now it’s here where I have a problem. This site is specifically for children, and kids that are browsing it on their own and potentially without parental consent.

It’s the Internet, though, there are worse things to find, right?!

Okay, so there are many things on this amazing world-wide-web that are nasty, horrible and are really not suitable for children and, I suspect, most adults too (I checked). To be honest, the NRA for kids site, gives those without the right to vote a place they can learn more about rifles in a kid friendly environment. Lets face it, target shooting is something that should be a healthy hobby, yeah?

Of course, paper target shooting with a fully or semi automatic rifle is perhaps a tad too advanced for your average eight year old, and I’m really sure it’s not wise just to leave little Johnny cleaning “his new favourite toy” unattended. To give kids the image and impression that, as a child, it’s okay to carry a gun and to use it without an adult’s supervision and guidance, is frankly irresponsible.

I finished reading the article and looked at the NRA site a bit more, until I eventually became oddly reminiscent and looked back at my own childhood and my own relationship with guns.

I grew up on a farm and I was taught to shoot by my Dad from around the age of eight (though I can’t remember exactly how old I was). Perhaps like many kids my age that lived and worked on farms in the UK growing up in the 80’s, my dad and I would go shooting together and he taught me the skills that were needed to be successful at it. Being quiet; reading and adapting to the wind’s speed and direction; understanding how smell and sound travel; breathing; laying low and, above all, patience. The purpose of shooting too was clear: We needed to control vermin that would otherwise have destroyed our produce, livestock and, ultimately, our livelihood.

It turns out I am a pretty good shot with an air rifle and if you asked me to hit a specific part of a paper target, I would rarely miss that mark. I can produce a compact grouping at distance. Something I can do with a bog-standard air rifle, yet still cuss when I see “Olympians” target-shooting, where try as they might, even with all their specialised kit and balanced, light weight rifles; they miss the required target. 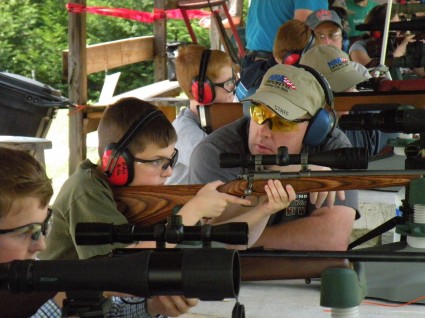 My dad was clear about guns and gave me my most important gun lessons that I abide by to this very day. Never aim a gun at anyone, even when you think it’s not loaded. Only put your finger on the trigger the second you need to. Never shoot towards houses, roads, into hedges or where you cannot see where the projectile will go. Never let your friends use the gun. There was an extensive list of other do’s and do not’s. Guns are not toys and, in a house where they are treated as toys, the real thing better be locked away and out of sight (and legally they should be).

I was allowed to use the gun on my own from about the age of thirteen. I can almost hear you calling me a hypocrite, but please bear with me I have an important point. This wasn’t until my father and my mother had assessed my maturity, my mental state and most importantly whether I was safe to use a gun on my own. Trust has no shades of grey, you either have it or you don’t. When it comes to weapons you have to tick all the trust boxes, if one hangs in the balance then there is no trust.

When I was older some friends came around to the farm and even though my dad had blessed them to use the gun, I barked orders at them the whole time. Don’t do this. Don’t do that. No one screwed about.

We shot at paper targets, compared scores and most importantly no-one got hurt. I’ve been tarred with the “hey it’s Mr Gun-Safety!” brush ever since that day by those two friends , but I don’t care. I even tell my kids off if they point toy guns at each other, animals or anyone else for that matter. I take guns 100% seriously, fake or not.

Now, isn’t this a site about gaming I hear you ask. It is, you’re damn right, but this has been bothering me for along time. I’ll introduce my point Mr Miyagi-style. “I’ve already given you the skills, Daniel-san, of how to be the parent of a kid that wants to play games that are officially certified as being unsuitable for them.”

Firstly, children should be allowed to be children for as long as possible, real effort should be made to ensure there is no rush. Secondly, as a parent it is our responsibility to nurture their skills, to teach them right and wrong and to assess their maturity along the path to adulthood. Thirdly, games are marked (as are films) with age ratings, they have age ratings for a reason, they are deemed unsuitable for a child under that age.

So, to explain how I turned out in the end and to show what incredible parenting can do for a child; I do not own a gun and never will. While I enjoy first-person shooters and violent computer games that utilise violence for story-based purpose, I find it very hard to extinguish even the most seemingly insignificant life-forms, such as bugs and spiders that invade my home. I became sentimental about all living things early on in life and I actually turned out to be terrible at vermin control, I killed one poor rodent and cried about it for days. My dad is a bit more old-school and does what needs to be done, but he doesn’t like it any more than I do. If this were Game of Thrones, he’d be Ned Stark for sure.

That’s it, I’ve said my piece but I have something really important to add before I go. All variations of mental illness are still greatly misunderstood and little is really known about them, let alone how to cure or even control them. There is great stigma attached to mental illness that prevents us from properly handling someone affected and this can get in the way of seeking treatment, support and proper care. It is also this stigma that seemingly prevents us as a society from being able to see the real underlying problem, so we look for something simple to blame. It’s not books, films, games or guns that physically harm human beings, it’s other human beings.