Lament of a Fallout Fan

It’s difficult to describe the cocktail of emotions that I went through when Fallout: New Vegas was announced. As a huge fan of Fallout 2, the news that the old employees of Black Isle were going to be developing a spin-off to the excellent Fallout 3 sent excitement levels soaring with just a dash of nostalgia, but occasionally raised some unanswerable questions that would often promptly sober me up. What do they mean by a spin-off? How much creative license is Bethesda giving here? Is the game engine going to change? Like I said, it’s difficult to succinctly sum up where my head was at considering I alternated between these feelings within the span of a single second. If I was to describe it onomatopoeically, it would probably go something like “Squuuubbeeeffwooo?” or something to that general effect.

Now that some hard evidence has come to light through the media it’s pretty easy to put my feelings into a humorous noise: “Wuh?” or perhaps more appropriately “Wuhthufuh?” I realise that it’s still very early days in the development process and I’m trying to exercise a bit of blind faith here, but I’m feeling nothing but soul-crushing disappointment at the content of the first screenshots of Fallout: New Vegas.

“Surely not!” you might yell, “Blasphemer!” Some might call me. “Put your trousers back on you weirdo” the masses will cry (I dull my pain by stripping, so what?), but I think that I’m well within my rights to feel worried, aggrieved and downright ticked off at this early stage of New Vegas’ development. My concerns about where the development of this game is heading can be pretty neatly wrapped up with the following screenshot: 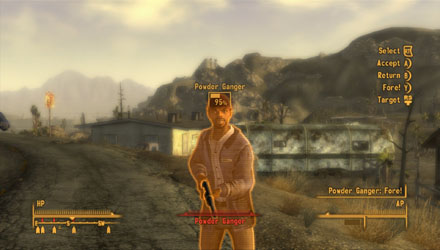 Now I’m not going to inundate you with the many reasons why I feel that this screen is an absolute slap in the face to a long serving fan of the Fallout series…well actually I am, but not yet. First up a positive, the inclusion of the “Fore!” command tells us two things; 1. Golf clubs are making an appearance as a weapon which is a nice touch, I felt that the weapons in Fallout 3 were lacking a bit of blunt force trauma so a nine iron can only go some way to remedying this; 2. Groin shots are being added to the protagonist’s roster. The experience of swinging a sledgehammer into someone’s privates just to hear them yell “No! My groin!” is a fond memory of Fallout 2 that will stay with me for a long time so being giving the opportunity to relive those times is a big win for me.

Now the big, stinking elephant in the room of a negative: Those four little letters, F.O.R.E, are the only thing that could be used to differentiate this screenshot from Fallout 3. Well, apart from the change of the HUD’s colour; I’m sure you’ll agree that the Fallout series is in desperate need of even more brown. There’s nothing wrong with Fallout 3 of course, I thought most it of was excellent but after hearing the news that Obsidian were developing a spin-off my initial expectations were focused on something new, exciting and innovative. Instead it appears that a few new patches are being sewn onto some old clothes. While I have a good feeling that most of the additions will have a positive effect on certain aspects of the game (the aforementioned groin shots and the inclusion of Geckos as enemies will certainly have the nostalgia cells in my brain ticking along nicely) I won’t be able to shake the idea that Fallout: New Vegas could have been so much more. The gaming industry is supposed to be a hotbed of creativity so why not take a risk and bring something fresh to the table? 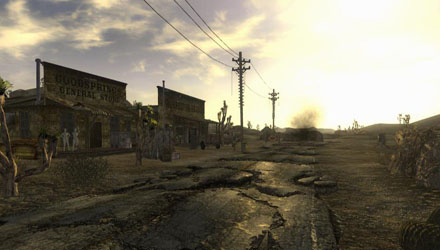 A stunning screen shot from Fall...Obliv...Mor...ummm

The downloadable content for Fallout 3 proves that no matter where you move the characters to, even if it’s an alien mothership on the edge of the galaxy, the core formula of Fallout 3’s gameplay is pretty restrictive in terms of expansion. Fighting through the snowy cliffs of Anchorage or the lush wildlife of Point Lookout it felt very much like I was retreading old ground, which is a feeling that I can’t see Obsidian circumventing when they make the move to the West Coast. Not that it looks like they’re even making an attempt to actually stamp their own authority on the gameplay of course, with it becoming apparent that the same combat system, graphical engine and dialogue mechanic are all firmly still in place. Come on guys I’ve had to watch the camera zoom in on character’s faces while there lips randomly flutter on top of their completely static frames twice already (Oblivion and Fallout 3 in case you were wondering) you could at least throw in a few new animations to liven things up. Maybe people could actually put on foot in front of the other while their mouths fail hopelessly to accurately visualise what they’re actually saying or start slapping themselves in the face every time to you loop through a cyclic piece of dialogue. Maybe I should just start putting down a bit of cold, hard cash on the eventuality that all black characters will be voiced by same guy as everyone in Fallout 3 apart from Three-Dog AND every Redguard in Oblivion.

I can understand why this could be perceived as a rant bourn of anger, but to be honest I’m not even all that surprised. Borrowing an IP from a big publisher, cherry picking the best bits from the early games in the series and then repeating them in the exact same way could almost be described as Obsidian’s modus operandi after Neverwinter Nights 2 and KOTOR 2, but this is an entirely unique set of circumstances considering they’re borrowing an IP from a publisher that bought it from them in the first place. I am experiencing what can only be described as a sense of hopelessness, disappointment not just in Obsidian and Bethesda, but in how much of a cut-throat conveyer belt that the gaming industry is becoming, and the factory line is becoming more ruthless and efficient by the day. From a business perspective, turning Fallout: New Vegas into a glorified expansion pack is the right decision to make; who could blame either party from capitalising on the critical success of such a bankable franchise? Don’t mistake understanding for acceptance though, my confidence in the technologically creative aspect of the gaming industry is gradually dwindling with every sequel, prequel, reimagining and Ubisoft title that is nonchalantly thrown over the fence.

Phew, and breathe. I’m interested in finding out what everyone else thinks about this. Even as a massive Fallout 3 fan I can’t see me getting the same enjoyment out of an entirely new standalone title that is so similar. What about you guys? Are you happy to see more of the same or would have preferred to have seen Obsidian do their own thing at the risk of it being worse than before?