Life lessons learned from the University of Gaming

Should the Mayan apocalypse have actually occurred today, gamers would have been more prepared than most; after all games may have taught us everything we need to know about surviving a nuclear, zombie or any other form of apocalypse that your imagination can think of.

If you actually stop and look closer, however, you might be surprised to see that they often offer lessons that are more immediately relevant to our lives.

It doesn’t matter if you have just left school, university or even looking for that big job; you will feel like a little fish in a very big pond, and the golden rule to success requires practice and experience, or to put into gaming terms “levelling up”.

In games we need XP to progress, and if you think about it, in real life you need to gain experience before you stand a chance of any form of career or academic progression.

That’s right; in your life, you will often have to go through the not very nice process of repeating one specific mundane activity over and over again, which is enough to dishearten even the most enthusiastic and positive person. Yet us gamers have been grinding our asses off in games like Final Fantasy for years; we have been trained for these moments.

As a rule of thumb, it’s worth remembering that if you’re in a camp and a bear attacks, you don’t have to run faster than the bear. You only have to be faster than the slowest camper, and you won’t find many gamers that fit this metaphor, except a few Call of Duty snipers.

Think outside the box
Such a horrible corporate saying, but how many times have you found yourself completely stuck on a problem where you keep trying the same fix again and again but with the same results? It’s not until you take a step back and look at a different way of solving the puzzle in front of you that you find a way of moving forward.

Once again this is something that gamers practice on a regular basis, unless of course you are a little lazy and feel the need to Google the workaround. Don’t stress too much, because you can use Google in the real world to offer a point in the right direction too.

Anyone that has completed Metal Gear Solid and heard the phrase “Snake? Snake? Snaaaaaaaaaaaaake!” would not have been able to do this without thinking outside of the box.

The average person can be quite predictable. If you are a gamer, I suspect you don’t fit into this category. 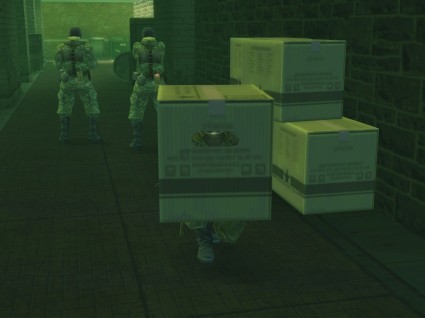 Sometimes you can think inside of a box too...

Be nice, build friendships.
Everyone you meet in the long journey called life will be connected to people that you will meet in the not-too-distant future, especially considering the power of social media sites such as Facebook and Linkedin which ultimately show that we are all connected in some small way.

If you behave like an arse now, it will affect your reputation quicker than you could possibly imagine, and this short-sighted strategy is the downfall of many a good man. This is a lesson that gamers have learned many years ago.

Essentially you can’t win anything without great teamwork, and this may even require cashing in a few favours. Who wants to be on their own fighting a Locust onslaught, the Covenant, or even Barry in HR.

If you talk to people for too long, they start repeating themselves.
Although this is often a frustrating aspect of playing games, I have sat through enough meetings (in a semi-conscious state as my mind wanders off to a happy place) to know that if you listen to people long enough they really do just repeat themselves and the point they are trying to convey, to a room full of people who don’t want to be there.

This may frustrate and anger many, but after years of playing games such as Skyrim, we simply take the information we need from the conversation and chuckle under our breath at just how people in our workplace are actually remarkably similar to those in the games that we play. Unfortunately, though, there is no “skip” option in real life. 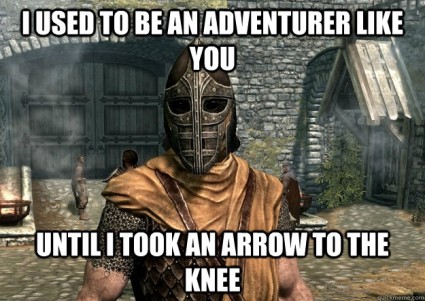 You have already told me that. Many times!

Never give up
To be successful at anything in life you are going to going to be knocked back many times before achieving you ultimate goal. A winner knows it’s not about how many times you get knocked down, but how many times you get up and dust yourself down and start the game again. I know this because I was brought up on Rocky movies, but this same lesson has been taught thousands of times in video-games.

Anyone who has walked away victorious from a boss fight in games such as Dead Rising, Tekken, Mortal Kombat or Ninja Gaiden, to name a few, will tell you how many of their peers had given up. Yet if you keep trying and use a combination of all of the skills we have mentioned above, you can overcome anything in life or in a video-game.

So the next time someone berates you and doesn’t understand why you love playing video-games, and claims that it’s nothing but a moronic waste of time, remember this article and that you really are one step ahead of the game.