Madden: The Original and The Best

Football, the kind played mainly with your hands and associated almost exclusively with the USA (so much so that the rest of the world differentiate it from Association Football by calling it American Football), actually has a massive global following even beyond Superbowl Weekend. While the razzmatazz of the NFL and its now regular visit to Wembley can certainly explain a large part of the basic love for the heavy-hitting action (and the cheerleaders can’t be discounted for their part either), the original EA Sports franchise has also played its part and facilitated a growing interest and passion for the mechanics and strategy of what is, in its purest form, an intense battle of wits.

Madden NFL as it’s now known is celebrating its Silver Anniversary this year, and the founding father of the console sports franchise continues to go from strength to strength. The legendary coach and commentator John Madden, who many this side of the pond will not know beyond the license, was first approached way back in 1984. The original took so long to come to fruition because the man wanted the game to be as realistic as possible. That ethos continues as the realism, both on the pitch and off it, are pushed by the developers year on year.

I can’t quite remember that debut version, but I do recall my introduction to the franchise back on the Sega Megadrive in the early 90’s and some great games played against my brother over the subsequent versions of that era. Surprisingly, 25 years on the basic mechanics of the game haven’t really changed that much. The view is still behind the team in possession and the camera flips on a possession change (more on that later) and you can still play with the original basic set-up of picking one of three suggested plays: ‘Ask Madden’. Even the process of passing plays is the same, with each eligible player given a button and you pressing the relevant button to pass to that guy. Simple but effective. 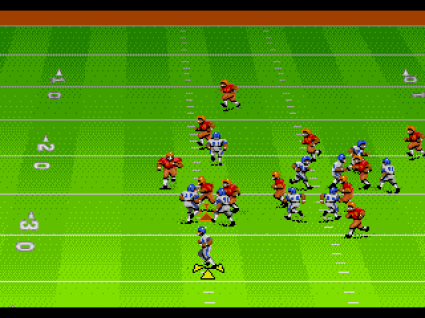 Old-school Madden at its best

Despite being the oldest of EASports big franchises (pre dating FIFA by five years) and keeping those core mechanics the same since its debut (unlike both FIFA and the TW series in particular) Madden manages to add enough each year to make it an essential purchase in my experience. While it is undoubtedly the game that gives me the most desire to ragequit in my collection, it still spends more time in my Xbox disc tray than any other.

That balance between sheer frustration and sensational joy is what sets Madden apart from any other sports franchise and arguably any other title currently available on home consoles. While it would be wrong for me not to mention that some of those frustrations come from things outside the player’s control, the vast majority of the time it is because your opponent, CPU or human, out-thought you or you just plain did something dumb (much more often the case for me this year). The beauty of the game and the sport is that you always have plenty of opportunities to right your wrongs and get your opponent swearing at the TV instead.

One of the best additions to a sports game I can think of this generation has been the online Franchise mode in Madden. This has progressed considerably over the past few years and will continue into Madden 25 where Connected Careers becomes Connected Franchise. This will bring back the Owner Mode that will allow the player to control every single aspect of their favourite team, from the cost of tickets and refreshments to the hiring of staff and even the town the team play in. So even if it is a few years off in the NFL, I am sure the London franchise will be well tested over the next twelve months by British fans. 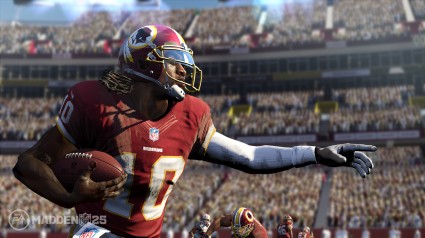 The most talked about knee in America

For those not familiar with the game, the online Franchise in all its guises allows you and your friends to compete over a complete NFL season. All 32 teams can be player-controlled, with trades and the draft included giving you the full experience. Building your franchise among your peers is incredibly involved and addictive.

Even when you don’t have a game you find yourself loading up your franchise to scout college players for the upcoming draft or develop the players on your roster with the XP you gain in matches. The aspect of building your roster through Free Agency and the draft adds a level of depth that in my opinion is unrivalled in any other sports franchise.

Outside of the Owner mode, Connected Franchise in Madden 25 looks to add extra depth to online and offline play by giving the full 32 user team experience, allowing draft imports from EASports other Football game NCAA, Fantasy drafts that strip all players from every team and allow you to pick your team from scratch and the ability to change players positions to further customize your roster. While several of these features are returning in one form or other the combination of them all both online and offline together for the first time alongside tweaks to the interface that should improve the experience I am sure will make for an even deeper experience this year.

Outside of the franchise mode the gameplay has been tweaked this year, with a definite emphasis back towards the ball carrier. Madden 13 was unquestionably a pass-first game which for me has certainly been an issue as I find myself passing more to my opponent’s defensive players than my receivers. Madden 25 will introduce the Run Free mechanic designed to give ball carriers more power. This isn’t restricted to Running Backs either, as Receivers and Defensive players who intercept passes will also benefit from the mechanic.

With an additional thirty moves to boost the simple spin and juke moves fans have grown used to and the ability to combine these to leave defenders stranded, some fans have already aired concerns that the balance may be too far the other way. 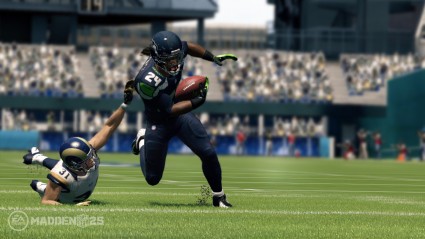 Fortunately, defensive players and the pursuit and tackling mechanic have also been upgraded, so not all the benefit is with the offense. Given the name Heat Seeker, this mechanic will allow players to be guided to pursue at the best possible angle. It will be triggered when pressing any of the main defensive buttons, Hit Stick, Defensive Assist or Wrap Tackle. While this could take some of the skill out of defending, we’re told that if the player in pursuit has a lower awareness stat they are more open to some of those new ball carrier moves, so simply holding down the button won’t work.

To those concerned about the defense, development of the Infinity Engine introduced last year could also add an extra level of skill to defensive play. Timing tackles with the Hit Stick could enhance your chance of causing a fumble, especially if you catch a player while performing one of the new moves. The balance between offense and defense, especially on the run, was pretty good last year in my opinion. I’m looking forward to see how this particular battle plays out again this time around.

Another big improvement this year should be with the big guys up front. Lineman have always been treated like the ugly ducklings and pretty much forgotten by the developers, but this year should be different with upgrades to the blocking mechanics that promise to make that battle at the line of scrimmage as key a part in Madden as it is in the NFL.

EA Sports have spoken about the lines’ ability to work both as a group and individuals to create gaps for runners or block gaps created by the pass rush. This is made possible by a considerable upgrade to the mechanics and animations, and the few clips we’ve seen certainly appear to show this. In my opinion it could be the most important development in the gameplay mechanics for some time. 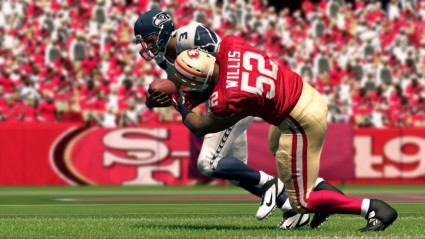 The other gameplay change is around the passing game and interceptions. As mentioned earlier Madden 13 was unashamedly a pass-first game, and those that mastered mechanics such as leading the receiver (which allowed you to throw almost to an area making it more difficult for the defense), appeared to have an advantage. After some criticism of the power of certain plays with these mechanics, EA Sports have stated that this area of the game has been developed further as they try not to fall into previous habits of introducing features and then forgetting about them.

On the opposite side, the Ball Hawk defensive mechanic that heavily assisted defensive backs on interceptions has also been improved and enhanced, meaning players will hopefully need to do a bit more to get those all important picks (good news for me).

Finally, the camera flip at turnovers is going to change “to avoid confusion”. As mentioned earlier, since its inception Madden’s default camera is behind the team in possession of the ball. While this is more often than not the offense, the nature of the sport is that the defense can win possession by forcing a fumble or intercepting a pass, and Madden has always dealt with this by freezing play and flipping the camera so that the defensive team are then running up the screen.

Apparently, this year it won’t. For 25 years gamers have grown used to this mechanic and while you can make your first step after the turnover backwards, it’s not all the time and rarely is an issue, yet the game developers, in their wisdom, have stated that the current system “confuses players” so they’ve changed it. Something tells me that more people will run the wrong way now as they expect the camera to flip and it doesn’t. Maybe all my interceptions will start to work in my favour?

Overall Madden 25 certainly looks and sounds like it will continue where its predecessors have left off, and I’m definitely eager to get my hands on it next month. Fingers crossed we’ll then be saying the original sports franchise continues to get better.