We have recently touched upon how corporate gaming has become, what used to be an underground guilty pleasure is now rapidly turning into mainstream entertainment and if there are any doubts about this, one look at the sales figures. They show that the PS3 has now sold 35.7 million units, Xbox 360 40 Million and Wii 70 million. This shows the main reason that we will be seeing Sony’s “Move” and Microsoft’s “Natal” this Christmas as they go after the Wii market.

The hardcore gamers amongst us are beginning to get a little tetchy as the world of gaming begins to change with rising costs of DLC and an increasing amount of product placements in games are starting to become the norm. The sad truth is that TV Shows, Magazines, Newspapers etc are created for one purpose and one purpose only and this is to fill advertising space and if a show does not perform it’s axed to make way for something else to keep the advertisers happy. A fail safe system but guess what? People are no longer watching TV, and even if they do, they skip the ads anyway.

The movie industry has been feeling the influence of the advertisers for a while now. It’s laughable that pretty much every movie you see shows the main character using an Apple Mac Laptop or the latest mobile phone but it’s still a rare occurrence in games, and is more noticeable as a result. Alan Wake received a fair amount of criticism for containing blatant product placement in the form of Energizer-branded lithium batteries and even going a step to far by introducing an achievement for watching a Verizon advert.

Sometimes adverts in games look a little out of place if not done right too, for example the film Ghostbusters was set in the 1980’s and yet when the game hit our consoles, the retro memories of the film are wiped out by a much newer Doritos logo. 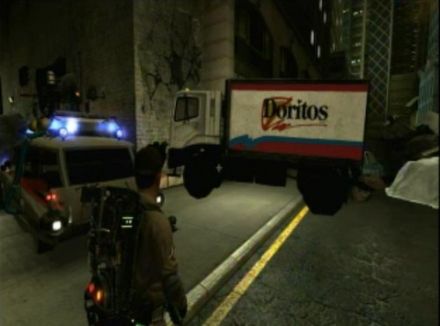 However many will say that with rising developing costs, if it helps make a better a game it is not a problem and even in some ways makes the gaming world feel more realistic. Although product placement in games will no doubt get more attention over the next few months, the reality is that it’s nothing new to the gaming industry. In fact it can be traced way back to 1978 in the computer game Adventure Land by Scott Adams who had the canny idea of inserting an advertisement for his then forthcoming game Pirate Adventure.

Zool on the Amiga was Gremlin Graphics answer to rival Sonic but it was their partnership with “Chupa Chups” which featured their logo and product throughout the game that people were talking about rather than the game itself. In the late 80’s Marlboro Banners were common place amongst Sega racing games and even the legend that is Mr Miyamoto gets a mention to for the Gamecubes Pikmin which heavily featured Duracell batteries and 7-Up bottle caps to name but a few.

If only Alan Wake had used Duracell...

This shows that this particular medium of advertising has been around for much longer than most of us can remember but has maybe become a little more sophisticated, or perhaps I should say ‘in your face’. To everyone here in the UK we have Lynx Deodorant, but for some reason most of the world call it AXE. This didn’t prevent the ‘little’ difference bother Ubisoft when featuring in Splinter Cell Chaos Theory. In an interview with Team Xbox David Rubin, senior brand manager for Axe said “Axe works with developers to create in-game advertising because it is an extremely effective way to reach the 18-34 year-old male audience, it’s just that simple.”

It's Lynx around here mate

No advertising article would be complete without a suggestion of hypocrisy and it doesn’t get much bigger than the most powerful man in the world, Barack Obama, who although despite hinting at video games being to blame for some of societies issues, he had no problems in becoming the first US presidential candidate to have bought in-game advertising in October 2008 when he to appeared on advertising billboard ads in the EA game Burnout Paradise.

Gaming changing the face of democracy

Possibly the creepiest product placement would come in the form of the rather sinister looking “The King” who was an unlockable character in Fight Night 3, presumably to scare the crap out of your opponent when he sees him in your corner but I wouldn’t fancy having him around when lying on the floor helpless.

The man guilty of embracing this form of advertising more than anyone though must be Hideo Kojima of Metal Gear Solid fame; Doritos, AXE (yes them again), Pepsi, Mountain Dew and even allowed Snake to sit and listen to his iPod, which seemed to have little relevance on the game, making it seem a cynical cash in. 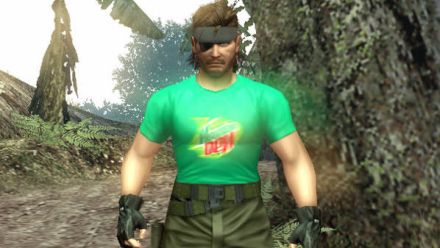 So product placement or in-game advertising in certainly not a new phenomenon and something that we are all likely to see much more of over the next few years, but what are your thoughts? Is it really such a bad compromise if it helps developers create a better and more realistic gaming experience?

Personally I agree with late comedian Bill Hicks; “Do a commercial, you’re off the artistic roll call. Every word you say is suspect, and you’re a corporate whore and eh, end of story.”