Skyrim is an enormously generous video-game. It has been more than a full year since its release and, even without downloadable content, I still feel as if I have barely scratched its frozen, mountainous surface. It offers players a remarkable amount of content already, so much content, in fact, that it threatens to immerse players whole, leaving them with very few hours each day for anything else. This was precisely my predicament in the weeks and months that followed its release. I am not proud, but I’m also not too broken up about it.

For all of the content it features, though, the one piece of it that I find most memorable and most compelling is a piece that I never fully had the chance to experience.

At some point in your journey through Skyrim’s arctic wastes, you will encounter the Dark Brotherhood, a group of assassins who ask for your help. Aiding them will lead you through one of the lengthiest and most well-developed quests in the entire game, one that many Skyrim players believe to be among the best that’s available to players. You can also choose to report the group to local authorities instead, who promptly offer you some gold in exchange for killing all of them, ending the questline completely before it even starts. This is the path I chose.

This is, apparently, the wrong answer. Almost every person I’ve spoken to that has played Skyrim has told me that I made a heinous mistake. Each of them cites the Dark Brotherhood questline as one of the game’s most engaging and rewarding in terms of gameplay, and each of them has spent a surplus of their time informing me that I am, sincerely, an idiot. This is likely true, but for unrelated reasons.

I fully understand why removing any possibility of finishing this quest is a bad decision, but in honesty, I found it to be one of the most invigorating and meaningful moments in all of my many, many hours with Skyrim. This is because it was one of the only moments in which my actions permanently affected the game’s world. Skyrim changed irrevocably once I removed the threat of the Brotherhood, and I had to deal with it. 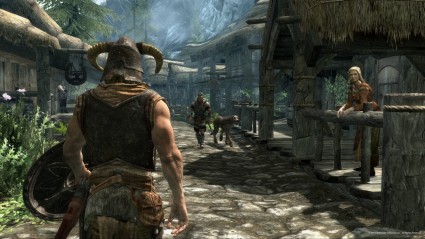 It’s a beautiful day in the neighborhood.

Skyrim places its players in a curious position by giving them the freedom to do anything and everything possible. This makes for a wonderfully immersive gaming experience at its best, but it’s also strangely hollow at times. Although the narrative hails you as the hero that fate has chosen to change the course of history, much of what you do in Skyrim has very little lasting effect on the world around you. Questlines are often completed and villains defeated without much notice from most passers-by, except for an occasional comment from a guard or townsperson. Other questlines that may have seemed related are typically left untouched by your actions. This is a weird feeling.

Completing the game’s central storyline, which involves ridding the world of the urgent threat of the dragons, does not actually change the world or quests in a dramatic way. Dragons still fly around and attack you on sight. It can often seem a bit like you are an enormously powerful hero that no one is paying any attention to, despite your best efforts.

My choice in the Dark Brotherhood questline mattered, though. It made a sincere impact; the threat (or boon, depending on your perspective) of the Brotherhood was removed from the world entirely. I had no way of retrieving those quests I had abruptly cut off. All of it was closed to me because of my own decision. It certainly changed my gameplay experience, as all of that content was no longer available, but it also made me feel much more powerful than almost anything else I had done up to that point. My choices had consequences and Skyrim was mine to shape as I saw fit, at least this time. 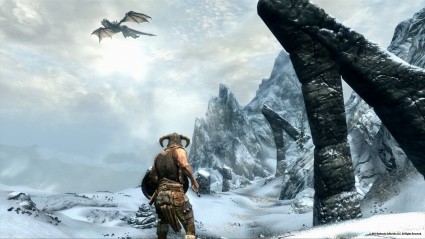 Going sleeveless in this weather is a much worse decision than trying to fight a dragon.

Creating a game that takes full advantage of this is certainly not an easy or simple task. It’s not just about branching paths and binary choices between good and evil, or life and death. It’s about constructing a game world that feels dynamic, that responds to player input in meaningful ways. It’s about crafting a world that is permanently, and not always predictably, altered by a player’s decisions. It involves trusting the player enough to give them that responsibility and to make them feel the real weight of their decisions and actions.

It’s a bold move and likely involves scaling back some of the truly massive amounts of content to make room for a more responsive and reactive experience. However, the payoff is pretty remarkable. The realization that I could never undo my actions, that I had left an indelible mark on Skyrim that other players may never have left, created an emotional response that can’t really be replicated in any other medium. It was worth far more than any rare item, gold, or experience points the game could throw at me thanks to its ability to form a meaningful, potent connection between player and game.

I have no problem going back to Skyrim again and again these days. I still spend hours doing quests that will likely not have much material impact on the world my character inhabits. It is, despite all of that, an excellent video-game. Yet part of me will always be hoping for another taste of that kind of responsibility and freedom. There isn’t much else out there quite like it.