The end of the gaming season

Football, Rugby, Cricket, NFL, NHL and even our beloved pastime of gaming all have something in common. They all have seasons. “What?” I hear you mutter under your breath. Think about it for a moment. From September until December, we are bombarded with triple-A video games that dominate our lives, and we wonder how we can possibly afford all of those must have titles before Christmas.

After Christmas, we get treated to a handful of must-have titles from developers that have decided to take the sensible option, releasing their games well away from the crazy period, ensuring more attention and increased sales. Mass Effect 3 was a cracking example of this and gained many an envious look from other publishers, probably wondering “Why didn’t we think of that?!”

In my mind, there is only one games publisher/developer that knows how to end the gaming season in style. I am of course talking about Rockstar Games. Grand Theft Auto IV (April 2008), Red Dead Redemption (May 2010), L.A. Noire (May 2011) and Max Payne 3 (May 2012) have all traditionally been the final big release before summer, until the gaming season picks up again in September.

This simple tactic shows that releasing your game at a time when people have very little else to choose from will get punters to quickly jump on board, especially with an uber cool reputation like Rockstar’s. If you doubt this observation, have quick look at the release schedule up until the end of August, how many big releases can you see on the horizon?

At the moment, gamers are probably split into two camps. The frustrated Diablo III players, and the gangster-loving, Jack Daniels (sorry, I meant Kong) drinking Max Payne 3 fans. After this, there isn’t a great deal to anticipate in the form of premier game titles.

The reason for this is that when the sun comes out in the summer, the dreaded “Please adjust brightness slide bar until the sign is barely visible” screen becomes incredibly annoying when you have a rhombus of light coming through your window preventing you from seeing anything at all. 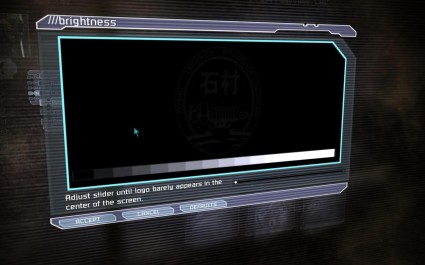 The dreaded brightness config screen is not welcome on a Summer's day.

Despite some portions of the media thinking that most gamers are suffering with Vitamin D deficiency or a bad case of rickets because of playing a few games, the actual truth is that it’s quite difficult to game on a hot summers day. Many of us will migrate to beer gardens across the land, before returning once the leaves fall from the trees and the cold dark nights return.

With this in mind, I think it’s fair to say that the gaming season, in the UK at least, is based from September to May. The summer months contain minimal gaming excitement, due to companies wanting to maximum profits and to avoid the apathy of the fickle gamer that leave their console alone when good weather comes.

As for Rockstar? Well, they have a double whammy up their sleeve this year. Not content with sealing the end of the season with Max Payne 3, they also have the much awaited Grand Theft Auto V appearing later in October. Ensuring big sales at the beginning and the end of the gaming season is a master-stroke.

If the band White Lies can sell a bucket load of albums by releasing them in January when nobody else is brave enough, then maybe fortune does favour the brave. In this uncertain time where both publishers and developers are struggling to stay afloat, maybe a few could learn a valuable lesson from the scheduling of releases by Rockstar games.