The Noob’s Guide To The Zombie Apocalypse

When it comes to the Left 4 Dead series, I am very much a noob. The first game never really appealed to me and simply passed me by, while the only reason Left 4 Dead 2 ever entered my collection was thanks to a very generous Christmas present. Now that I’ve given the co-op zombie shooter a try however, I can definitely see what all the fuss was about and am completely absorbed by the whole thing. When playing with friends it’s exhilarating, frantic fun and immensely rewarding for players who encourage communication and teamwork. However as a newcomer to the series I had a lot of catching up to do, and quickly found that in most of the game modes there are numerous deadly pitfalls which are ripe for picking off the untrained Survivor. With this in mind, I’ve compiled a list of some of the annoyances, exploits and tips for the Left 4 Dead newcomer, all of which were learned the hard way, i.e. dying a lot. Survivors (or Infected as the case may be), I present to you: The Noob’s Guide To The Zombie Apocalypse; it might just save your life one day.

Watch out for Achievement/Trophy Whores
The Left 4 Dead games have an expansive and varied set of achievements which go a long way to adding depth to the different game types on offer. However I have come across a few occasions where these rewards have led to conflicts (shall we say) of interest among the survivors. Organising an achievement hunt beforehand with your team is acceptable behaviour and in some cases necessary to achieve what are otherwise very tricky objectives. What is not acceptable however, is swanning off in the heat of battle to grab a garden gnome (The ‘Guardin’ Gnome’ achievement) to take to the safehouse, or hacking away at a Tank with a cricket bat while it massacres your squad (‘Tank Burger’ achievement). There’s a time and a place for it, and I’ve already watched teammates die* after breaking away from the pack to follow some completionist ulterior motive.

*Or refused to save them because of their foolishness, but let’s not get into semantics.

Never play as the Boomer
I would love to know what I’m missing here and if anyone else can enlighten me please do, but as far as I can see the Boomer is utter horses**t. In Versus mode, most Special Infected have at least one game changing move; a well placed acid patch from a Spitter, a formation breaking grab from a Smoker as well as the unblockable attacks of the Charger, Jockey and Hunter. The Boomer vomits on people. Fair enough, the bile it expels attracts a horde onto the unfortunate recipient but there is no effective way that the Boomer can directly attack the survivors. To make matters worse, it’s loud, slow and so bloated that a single shot from a pistol will result in it exploding in a puff of green and red ugliness. I appreciate that the Boomer is intended to act as a support character in the Infected ranks, but consider that the support guy on the Survivors’ side is probably the fella with the sniper rifle. I know which side I’d rather be on in that scenario. 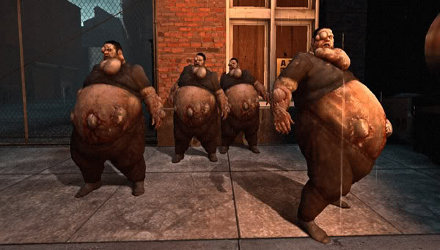 We may be useless on our own, but now... we are four times as useless

Let the heroes be punished
There’s always one. You can progress through an entire campaign without a scratch thanks to some tight teamwork, but there will always be one point where one of the team members decides to be a hero at the worst possible time. Under normal circumstances when a fellow survivor is incapacitated of course you should do your utmost to get them back to their feet. When Coach decides to take on a Witch with a frying pan on the other hand, it might be a better idea to leave him to his thoroughly deserved fate. There is no place for heroes in a zombie apocalypse, so bear this in mind when you’re deciding how to use that last health pack.

Save yourselves… and take me with you…
No matter what anyone tells you, there will never be a point where it is wrong to scream like a coward when it looks like you’re on death’s door. Especially in realism mode, where all visual cues are removed, it is an absolute must to squeal like a pansy when you’ve been incapacitated. In essence, have no shame; when push comes to shove, acting like a little girl will more than likely save your life, and the embarrassment only lasts until it happens to the next guy.

The Right Bumper is your friend
I imagine you’re already aware of this, but the AI director can be a right bastard at times. Just when you think you’re getting a situation under control and the entire team is concentrating their fire on a single point, the director will pretty much without fail spawn a new horde of infected giving you the headache of fighting on two fronts. “Surely that doesn’t happen all the time?” I hear you ask? Why else would Valve have mapped a button to the singular purpose of shifting your view 180 degrees? This isn’t a mere conspiracy theory, it’s scientific factoid fellow Survivors. As a general rule of thumb, there is usually a moment when you’ll get the upper hand and start thinking about your next move after dispatching the current horde of Infected. This is the moment to turn around, as it’s at this point that the AI director’s sadistic tendencies come to the fore, and a rather upset Tank spawns behind your plucky group. 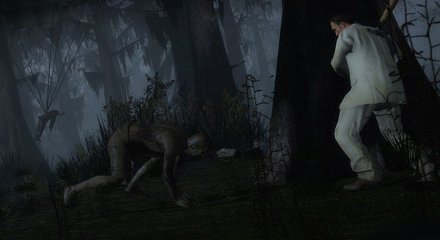 The aforementioned hero, about to get massacred no doubt

Wait ’til it hits the fan
It’s not just the Survivors that need to work as a team in order to succeed, going it alone as one of the Special Infected will more often than not result in a quick death and a painfully long respawn time. I realised this after my first Versus match after mounting Ellis while playing as the Jockey. My initial euphoria was replaced by a feeling of impending doom as I noticed the other heavily armed survivors had their guns trained on me and there was absolutely nothing I could do to stop them making me their bitch. Most of the Infected have very useful attacks that essentially take a survivor out the equation, but they’re at their most effective when used in conjunction with a massive horde and the rest of your team. Imagine the panic that would spread throughout the team as a Smoker, Charger and Hunter all attacked the team at the same time, all but rendering them helpless and unable to rescue each other. It’s what I like to call the Zombie Clusterf**k, and it should be the first move in your playbook.

Note that this doesn’t really apply if you’re lucky enough to be the Tank, where you’re actively encouraged to go on a bloodthirsty rampage. Or the Boomer for that matter, where you might as well just run into the nearest pointy thing.

Give each other a heads up
Communication is key to survival in a zombie apocalypse, and for the most part gamers are able to keep other each informed of the most immediate threats to the team. “There’s a Witch over there”, “I’m being molested by a Hunter” and “Oh bollocks I’m the Boomer” are common announcements in my experience, but it’s also important to keep the team informed about some of your own impending actions. A little notification that you’re about to go on a melee spree will reduce the chances of you getting popped in the back of the head by a stray bullet. An it’s an absolute must to let the other Survivors know when you’re about to unleash a Molotov or Bile Bomb into the crowd, unless you enjoy setting your teammates on fire and attracting the population of the city onto them.

Don’t give in to temptation
It may just be that I’m playing with the wrong group of guys (There’s no maybe about it really, one of the Survivors in my team really did belt a Witch over the head with a frying pan), but I find that’s it best to err on the side of caution when it comes to weapon choices. By that I mean, leave the grenade launcher alone. The splash damage will certainly provide an impressive boost to your zombie killing stats, but it will deal a considerable bit of nastiness to your teammates, as well as blowing up any nearby explosives. It may keep the Infected at bay, but one misplaced shot (and you will misplace one) will more often than not result in a very unpleasant and destructive chain reaction. These kind of occasions are the reason that the Vote to Kick function exists, and I’ve seen many careless Survivors come close to feeling its icy touch.

Hopefully this entirely serious guide will help you in your future endeavours in the Apocalypse, regardless of which side you’re on, but it’s by no means complete. What advice can you pass on to novice zombie killers like myself? Let us know!