2009 has seen a hell of a close of a decade. Who would have believed Rage Against The Machine would be Christmas Number One in the UK Singles Charts, or that America would induct the first black president into the White House? Who expected a vampire love story to become one of the most beloved romances of our time or Jedward and Susan Boyle to become this year’s biggest success stories? There has been enough activity in the news to keep people talking and the gaming industry is no exception, with talking points of its own over the last twelve months. So, in celebration of this, I’ve decided to narrow down my top five news stories in order of the most surprising and interesting.

5. The unveiling of Project Natal and the Sony Motion Controller
The question was never  “Will Microsoft and Sony ever decide to create a motion sensitive peripheral?” The question was “When?” This year, we received our answer. It is true that the Nintendo Wii has been the biggest success story of the last decade and has introduced thousands of people to gaming, but the technology powering Project Natal and the Sony Motion Control seems to make the Wii’s technology look like child’s play in comparison. The demo of Milo at E3 was considered one of the biggest talking points of the whole show, introducing audiences to Project Natal’s voice recognition abilities, how intelligent and familiar the artificial intelligence can become with a the guidance of a player, and the new levels of interactivity offered by this astonishing piece of technology.

Peter Molyneux, one of the greatest gaming visionaries of our time, was on hand to promote the concept and has since announced that the next installment in his fabled Fable series will make use of the Natal technology. A tech demo at the event also demonstrated a dodgeball type game that has the player athletically maneuvering, taking full advantage of floor space. If Microsoft have their way and the project takes off, we’ll never need a controller in our hands again. It will be our own imagination powering our in-game actions.

Sony, on the other hand, have followed a slightly more conventional route and have decided to use a hand-held peripheral to control the action. Their take on motion control is due out in the Spring of 2010, whereas Natal isn’t out until later on in the Autumn. However, unlike Natal, Sony’s project still remains shrouded in much mystery. Even though tech demos were shown at E3, we still do not have an official name for the product or a price tag. That said, many people who have tried Sony’s wand have preferred its responsiveness and capabilities over Microsoft’s own Natal. Could it be Microsoft have taken a step too far, too early and that Sony’s technology is a true depiction of what the industry is capable of right now?

Time will certainly tell who has the superior technology. It’s surprising to see the different routes both Sony and Microsoft are taking but one thing is for certain; 2010 will be the year of gesture-based gaming!

4. The announcement of Left 4 Dead 2
It’s not uncommon to wait half a decade for a sequel to a game, but as Valve have proven, it’s also possible to receive one in less than a year. I imagine there was no shortage of jaws dropping during Microsoft’s press conference when a video montage of Left 4 Dead 2 was shown and the news that the game would ship in November was broken. The original title still felt fresh, the online community was still extremely active both on Xbox Live and through Steam, and there was a steady stream of content being released by Valve, with the team promising more in the weeks to come. Yet, the team was obviously hard at work on a sequel even at that early stage and were understandably keen to invest their creative energies into their new product.

Left 4 Dead 2 has gone on to become one of the most controversial games this year, standing side by side with Modern Warfare 2. Enraged groups of fans launched a campaign to boycott the game, it was criticized for being racist and even insensitive towards New Orleans and those that died during the tragedy of Hurricane Katrina. Yet L4D2 has gone on to outsell its predecessor and improve many of the faults that many held against the original. Even still, not many could have expected a sequel so imminently for a much beloved franchise.

3. The success of Batman Arkham Asylum
It’s hard to believe that we finally have an authentic and awesome Batman game to be excited about, yet Arkham Asylum has finally proven the critics and doubters wrong and given us a truly magnificent experience under the cowl of the caped crusader. Rocksteady Studios have undertaken one of the greatest comic book franchises out there, and actually created an exceptionally rare great game instead of a typical poor adaptation. It’s not so much the sales of the title that came as a surprise (the game has easily surpassed the one million mark, comfortably laminating itself with platinum) more that Rocksteady have truly made the player feel as if they are Batman, as if they are trying to beat one of the Joker’s vindictive schemes and working against time to ensure that Arkham Asylum isn’t overrun by the inmates.

In doing so, Rocksteady have established themselves as a AAA development house. They have proven they can make a product people want to play, and can implement fun and interesting dynamics along the way. The success of the game has already put the team hard at work on a sequel, unveiled at the Spike Game Awards a few weeks back and raised the bar for future titles featuring DC’s poster boy.

2. The arrival of Metal Gear Solid on Xbox 360
What many have deemed the final nail in Sony’s coffin. Last year’s unveiling of Final Fantasy XIII was proof that Microsoft’s threshold on the gaming market no longer cared for boundaries and was creeping into Sony’s treasured vault of jewels. This was further re-iterated by the announcement future Metal Gear Solid installments were going to be featured on Xbox 360 by Hideo Kojima. The news came just weeks after he said that the franchise would remain faithful to Sony and that he would no longer be involved with future Metal Gear projects. Yet, Metal Gear Solid: Rising, directed by Hideo Kojima, will be the first title featured on Xbox 360, and not an updated version of Metal Gear Solid 4 as originally anticipated. Also, as we now know, the central protagonist will not be the Solid Snake as many fans of the series expected, but instead will be the beach bimbo turned ninja, Raiden. Indeed, a bold move by Kojima, who is well aware that the last time he attempted to do this with Metal Gear Solid 2, it was met with a great wave of fan outrage.

However, one cannot be hasty to judge a project before they have even got hands-on impressions, and the very news that Metal Gear is coming to Xbox is as powerful a blow as Microsoft have landed in the console war against Sony, and is an increasing reminder of just how much things have changed in the last decade as to who the market leader is. 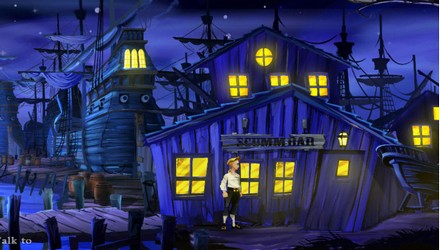 As shocking as Hideo Kojima’s announcement of Metal Gear on Xbox was, there has been no news story this year that has made my jaw drop and smash the floor with a resounding thud quite like this one. This story is proof that just about anything can happen in the gaming industry, no matter how outlandish it may seem. Before it became all about Star Wars, Lucasarts were known infamously for their point and click adventure games, including Sam and Max, Full Throttle and Grim Fandango. In fact, they were pretty darn good at it, and in the heyday of PC gaming, they made some of the finest titles for the format, many of which still reside in the top 100 PC games of all time. However, after a decade of storytelling, back in 1995, it seemed Lucasarts were done with the genre forever seeing no profit in these types of games. Yet, despite this, campaigns and petitions ensued online for Lucasarts to reconsider their stance, although any future I:P’s or installments in established franchises seemed like a distant fantasy.

Then, back in May of this year, a strange rumour popped up from a German gaming magazine that to celebrate its 20th anniversary, The Secret of Monkey Island, a classic adventure game from the days of the Amiga, was being remade for Xbox Live Arcade. Of course, the news was laughed at heartily as if the reader were drinking themselves a pint of grog, and easily dismissed due to many previous disappointments in the past. Then, just a few weeks later at E3, not only was the news of the remake confirmed but development on a sequel by Telltale Games, emerged. With many of the original crew coming back on board with Lucasarts to remake the game in the way it was originally intended and to also oversee the future installments, it was as if hell itself had frozen over, and the impossible had indeed been made possible. The adventures of Guybrush Threepwood are more of a talking point than they’ve ever been and Lucasarts have found a new home for their products on Xbox 360.

Delays from 2009 and the resulting Q1 2010 lineup
Sam Raimi to direct a World of Warcraft Movie
The announcement of On Live, its features and that it will meet its release date.
Unchartered 2 considered Game of the Year despite its fellow contenders.