What you see isn’t always what you get…

With the press conferences packed away and the glitz, glamour and caffeine only a memory now, one thing from the presentations has appeared to strike a heated debate among the onlookers. The Wii U.

Almost every aspect of this fabled beast of a console has caused a stir; from what it can do, to the storm of confusion it was announced in, to the drop in shares after what most would assume to be a promising announcement. The side of the debate that piqued my interest was the one that raged when the announcement came from Reggie Fils-Aime regarding the ‘authenticity’ of the footage they had showed whilst demonstrating the new console.

For those who have remained unaware so far, whilst pointing out to the world the wealth of potential that was to be included in their newest addition to the market, they showed footage of a variety of games that third-party developers would be bringing to the system. However, all was not as it seemed to some. The footage they showed was not from the new console, nor any console they owned, but footage recorded on their rival consoles and PC.

Some have claimed this was obvious, and irrelevant, after all the console has not only yet to be released but is at least a year away from such a date, so of course it wouldn’t have content ready to show straight away. If they were at a state to show games, to show what had been developed for it, to have the same quality (or at least close) to what they had shown on-screen, surely the console would be ready for release, either in the coming months, or right away? Yet, despite this defense Danny Bilson of THQ stated that one of their games, Darksiders 2, was not only planning to be released on the Wii U, but was currently already running on the system and there were both ready and willing to demonstrate. 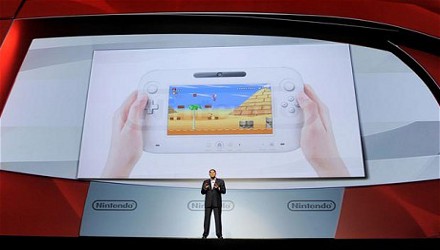 Allegedly, a free pair of hands come with each console.

The less placid voice in the argument suggests that it was not obvious, and in such an event it should be stated this is not actual Wii U footage. This is what they do for adverts, which in most regards this event is one giant advert, so why did they not deem it important enough until the day after to begin making mention of this use of footage? Likewise, if this had been the Microsoft press conference, and they had declared what an awesome and riveting game they were bringing to their system, and it had come out that they had used footage from a Playstation to demonstrate this, would the response from those claiming unimportance have been the same?

In other years, we have had videos showing promises without necessarily having the evidence to back it up there and then too, such as one of the first Kinect titles showing happy families playing puzzle games and sports games, crushing towns as monsters, scanning skateboards and picking outfits. None of those glimpses were more than ‘potential ideas’ at that point. Is this demonstration any less real than Nintendo’s recent efforts?

I am for the innovation Nintendo are putting out there, and whether I purchase the console on day one or not, I will certainly be following with great interest. I am, however, still waiting to be convinced that this console can do all that it has promised.

We here at TIMJ want to hear your opinions on this matter too, if you want to use the comments section (or head over to the forums) and let us know what your take on the conference was.