World of Warcraft for the newcomer

World of Warcraft (More commonly known as ‘WoW’), has reached such a high pedestal of achievement in the gaming space that it is hard to fathom any gamer not having at least an idea of what it is. Having passed the 12 million players mark just two short weeks ago, WoW shows no signs of slowing down. However, for those of us who have not played the game yet, that is why this article exists; First of all, to let you know if the game is for you. A lot of people think that a video game can’t be that large of a commitment… That’s downright wrong. Second of all, to send those of you into the game with more knowledge of what to expect than before. This isn’t to say I can tell you everything there is to know about WoW in one article, because that would be heresy; there’s too much to tell. Being that I’ve played the game for a few years now, hopefully my advice will come in handy.

This game is a surefire commitment of your time and effort. You’re probably better off buying a workout video regimen and keeping to that, because this game will take weeks or even months of playtime to become proficient at. Bear in mind when I say “Weeks or even months”, I mean weeks or even months. If you didn’t take my advice before and look into a workout plan, then I would actually recommend you to try a different game first. There are many games out there that don’t take near as much time up as WoW does that are also MMOs. You’ll find that many of the players on WoW are people who are only playing because they love the social aspect of it, and I will admit; You will not find a better social experience in gaming. Then there are those of you who just want to get into it and try the game out. This is the group of people who will download the free 10-day World of Warcraft trial that I didn’t tell them about and proceed down the veritable Blizzard assembly line of loyal players.

The basis on which the game is set follows, for the most part, the Warcraft RTS (Real-Time Strategy) series of games. Seeing names like Thrall, Arthas, and many others brings back memories that are simply nostalgic. If you value this in the games you play, then Blizzard is sure to satisfy your expectations. For instance, from the moment you step into Northrend (We’ll get to what that is later.), you will be interacting with Arthas. While he may be turned Lich King at this time, it’s still pretty cool.

The World of Warcraft has a good line of races to choose from. The races are split into two factions, each with their own unique cultures. Each race comes with their own different racial ability, and this ability can be used in either Player vs Player (PvP) or Player vs Environment (PVE) combat. While some of these abilities may be more useful than others, I’ll let you decide that for yourself, because I’ve listed the races below as well as their racial abilities and some interesting facts about each one.

The highest level attainable in the game is ’80’ at the moment. You get there by completing quests and killing monsters for experience. Depending on what race you decide on playing as, that will in turn decide where in the world you start at. Humans start at the human capital, Stormwind. Orcs start at the orc capital, Orgrimmar etc. This brings us to the many areas placed throughout the World of Warcraft. With each expansion the game grows and new places are added for the player to explore. When the first game, ‘World of Warcraft’ was released, you were granted access to the world of ‘Azeroth’. This took you from levels 1-60. When the second expansion, ‘The Burning Crusade’ was released, you were able to explore the world of Outland. This experience took you through the levels of 60-70. Finally, the third and latest expansion, ‘The Wrath of the Lich King’ introduced Northrend. This took you from 70-80. Below I’ve described each area and what you should expect to see in each. 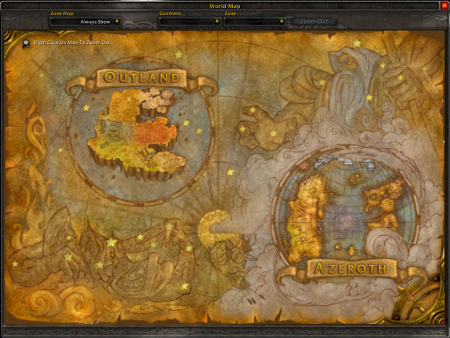 Outland and Azeroth seen from the map view.

Furthermore, the game offers you the option to choose what ‘Class’ you want to play as. Each different class offers unique and powerful abilities to the player, most of which can be used in both PvP and PvE combat. Each class has three different talent specializations, each focusing on doing damage, healing, protecting, or offering you different ways to do damage. Some races are not able to play as certain classes for unseen reasons. In any case, I’ve listed the different character classes below, and what each of them can offer the player in terms of spells and abilities. 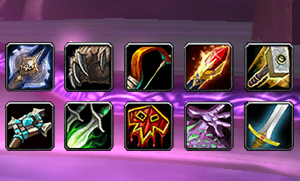 The folks at Blizzard are set to release their next expansion, ‘Cataclysm’, on December 7th, 2010. Unlike the previous entries to the game, this will not add a new land mass or world to the game, but instead it will reshape Azeroth. The level cap is being increased to 85, both Worgen and Goblin race archtypes are being unveiled, and new professions are all a part of what we should expect in the looming expansion. However, what does this mean for you? It means that if you were waiting to give World of Warcraft a try, that now is the time. You can get to level 80 and prepare yourself for the expansion. I hope this helped some of you decide if WoW is for you, and if so, I will see you in Cataclysm!