We kind of assumed that the recently announced handful of Persona games were likely to see a release in the West, but Atlus’ announcement is welcome all the same.

People did start to raise concerns about some of these titles seeing life outside of Japan, what with Sega’s (the new owners of Atlus) less than stellar history of localizing and launching niche Japanese titles. Luckily, for all you Persona fans out there, you’ve got a lot to look forward to.

Top of the pile has to be Persona 5. The latest game in the ‘main’ series, not too much is known about it. Judging by the teaser trailer that we’ve seen and the accompanying images, slavery, in some form, looks to be a main theme of the game. Persona 5’s only confirmed for the Playstation 3 at the moment. Sorry Xbox 360 owners.

The next two games look like pure fan-service, but not in a gross way. Mostly.

Persona Q: Shadow of the Labyrinth sees characters from both Persona 3 & 4 team up to take on a bunch of, well… labyrinths I guess. For the first time a Persona title’s available on a Nintendo console as this is set for the 3DS. 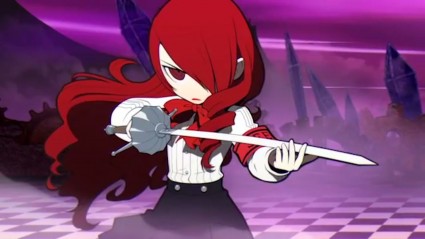 What’s most striking about the game is the fact that everyone’s had a chibi make-over. Look how cute they are! LOOK!

A slight change of pace, and seemingly being made despite no-one asking for it, is Persona 4: Dancing All Night. Part of me doesn’t want to explain what this game is and instead wants to know what you think the game is, based on that title alone. 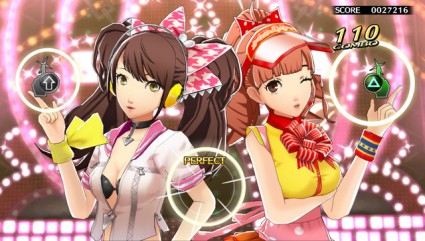 Alas, I’m far too professional for that. The long and short of it is that Dancing All Night (DAN for short) is a rhythm game in a very similar vein to Dance Dance Revolution. It’ll be out on the Vita and to be honest, that’s the last I want to talk about it until they can get Rise to button up her shirt. She’s better than that.

Lastly, but by no means least, is Persona 4 Arena Ultimax. Already this simply sounds amazing. I thought Revengeance was the best made-up word to be used in a videogame title but now there’s ultimax. Just say it out loud.

Anyway, if Persona 4 Arena sounds familiar that’s because it was the fighting game that received a pretty positive reception and, speaking for myself here, was highly enjoyable. As is the way with all fighting games ever, this is a re-release that includes extra content. You know the deal, more characters, locations and moves. I’m hoping Ultimax adds to Arena’s single-player story-driven campaign as it was one of the more outstanding features of the original.