Batman: Arkham Knight Gets Announced for PS4, Xbox One and PC

Is this really news? I mean, the sun rises from the East every morning. Is that news? Don’t get me wrong, I look forward to playing a new Batman game, but to call this news? I don’t know…

Anywho, a new Batman game is being released. It’ll be called Batman: Arkham Knight and it’s being made by Rocksteady, the original developers of the Arkham series of Batman games. This is no doubt a welcome return as Arkham Origins, developed by WB Game Montreal, was met with a lukewarm reception at best.

I won’t explain the trailer to you. You can instead watch it for yourself.

So the story seems to be that Scarecrow, who wasn’t seen in Arkham City, has got together all of the Batman’s greatest enemies and plans on messing up Arkham. Why? Because he’s the Scarecrow and making scary things happen is his modus operandi.

Game Informer seem to have the exclusive on all things Arkham Knight and have a whole month (!?) of coverage planned. As part of their exclusive access to the game, they’re claiming that ‘the Batmobile is finally a core element of the gameplay’. Sounds good to me!

Also, you’ll notice that the trailer ends with the familiar sight of the ‘Pre-order bonus’. 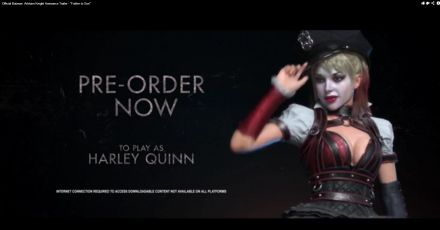 A pre-order bonus? For me? Oh you shouldn’t have…

If you hand over your money now, before you even get a look at how the developers are coping with the new generation of consoles, you’ll be rewarded by playing as Harley Quinn.

Luckily we won’t have too long to wait as the game is ‘scheduled for release worldwide in 2014’.