Back at an E3 2013 full of next-gen reveals, Titanfall game seemed to steal the show with over sixty awards in total, including a number of mainstream media outlet’s ‘Best of Show’. That same game has continued to receive rave previews and rewards at every game show in the eight months since, including Gamescom and the Tokyo Game Show. Suffice to say, when Respawn announced there would be a Beta of its upcoming mech-based FPS, one or two people around the world were a wee bit excited.

Titanfall is a game that I would normally run a mile from. Giant robots have had a chequered past for me, from the incredibly enjoyable Zone of the Enders to the incredibly boring Armored Core, and my record on FPS’s is somewhere between awful and non-existent. I do, however, have to hold my hands up and say I am one of those people that has bought into all the hype surrounding this one. Fortunately I was lucky enough to get into the Xbox One Beta before it became open and have spent the past few days working out whether Titanfall will be more ZoE or AC

The beta introduced us to two maps, which were very different but both very enjoyable. ‘Fracture’ was the first I played and basically acts as a broken landscape that features derelict buildings and open space in equal measure. The large, open areas are a major challenge for pilots as you are fully exposed and have fewer escape routes. On the flip-side, it works well when in a Titan to boost your way across and pick up some easy kills on the way.

Angel City on the other hand, is more built up on the whole (though that’s not to say there aren’t some open areas) and was the perfect playground to get to grips with the pilots’ movement. Closely packed buildings across the skyline lend themselves to wall running and the entire map opens up as you link these with the jump boost and find yourself above the City. This allows you to look at other game components, like rodeoing on the back of a Titan. Simply jump on top and your pilot will open up a panel for you to shoot out the circuits of the mech for some nice kill scores.

There are three different game modes on offer and they are as diverse as the two maps. Attrition is your standard deathmatch style game where two teams face off and the winner is the team that reaches a specific score first. Hard Point is akin to domination modes where you have three Hard Points on the map and need to hold them for as long as possible. In both modes you begin as a Pilot and have to wait for your Titan to become available. Once it is, you call it in and watch it drop from the sky, then you can take over and as you see fit. Once your Titan is destroyed you have to wait for a replacement and so the cycle continues. 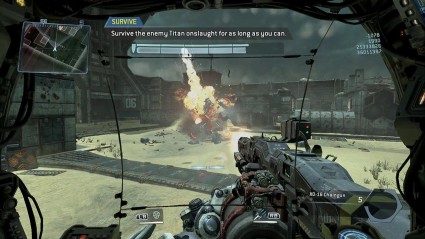 Taking down Titan’s is particularly satisfying

I personally liked the fact that in every game I had a chance to use both pilot and Titan for around the same amount of time. The gameplay is quite different depending on which you are, with movement and vision greatly improved on foot while your defences and power are obviously greater at the controls of one of the Titans. If you want, you can mix the two, as – having called in your Titan – you can set it to follow or guard mode and continue on foot yourself.

The other thing to note on both these game modes is the Epilogue. As the match ends, the rules change as the losing side get given an evacuation point, a countdown and a single life to get themselves out of there. Reaching the Evac point is tough, staying alive and getting on the ship is even tougher but if you make it you will get a small XP boost and you can also boost your score by taking out a few of the Victors on the way. The Epilogue is a neat, unique twist on the FPS genre and adds a little extra to the end of your game, win or lose. Kudos Respawn.

The third and final mode on show was the Last Titan Standing mode, where everyone starts in a Titan with just one life and the aim of the game is to kill the opposition before they kill you. This can be much more frantic and fast paced, as you often find six or seven giant Mechs meeting in the middle of the map knocking seven bells out of each other and blowing each other up. Usually, however, the winning team are the ones that err on the side of caution and ultimately work themselves into a few 2 v 1’s. The other big difference after starting as a Titan is that Last Titan standing only gives you one life and thus removes the Epilogue. 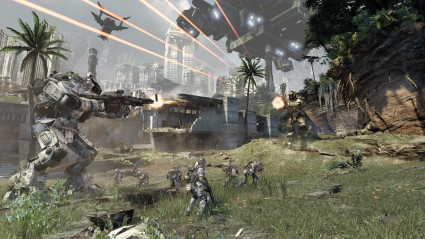 Throughout the Beta you have three standard Loadouts for both Pilot and Titan and, as you progress acquiring XP, you get a taste of the unlocks that will come in the full game. Level five opens up custom options for the Pilot, while you have to wait until level ten for the Titan customisation. Weapon unlocks are fairly basic here, with only a handful on offer but the progress seems fairly steady.

Progress can, however, be accelerated with the completion of challenges, such as travelling a certain distance in a Titan or getting so many specific kills etc. Again the challenges come across here as fairly standard, so we’ll need to see how they open up in the full game. The other bonus comes from Titanfall’s consumable take on perks: Burn Cards. Burn cards are awarded for achieving certain targets and you get up to three slots you can fill with these pre-match. Use of a burn card is achieved by pressing Y after you die and the perk will last for that life only.

This is another area where the Beta possibly doesn’t do the full game justice in my opinion, as the cards I managed to get are fairly low-key like speeding up the Titan drop or giving your Pilot a speed boost, but I like the idea that you are limited on how many you can play each round and that they only last a single life.

The one big gripe I have is that each game has as many, if not more A.I. bots or Grunts than it does human players. Though the easier nature of killing these is reflected in a lower XP score for the effort, I can’t help but wonder if they couldn’t be replaced by more humans. Inoffensive as they are, the A.I. is pretty poor, making even my gormless, static pilot look like the most flexible character in play.

Finally, I have to comment on the sheer size and scale of what I have seen so far. The maps are big and beautiful, the Titans are huge and menacing and, with the exception of a handful of moments when three Titan’s have tried to run into the same space at the same time, I have not seen any drops in frame-rate.

So, it seems that there is a whole lot to like about Titanfall. Hopefully this early promise equates to one epic title when it lands on March 14th