The words ‘El Shaddai’ will most likely hold a bit more meaning for me than many of you. Being raised Christian and having all of that Bible stuff drilled into me, one of the morsels I picked up was that ‘El Shaddai’ is Hebrew for ‘God Almighty’, and one of the many Judaic names for God. It is also an annoying worship song. That considered, I was pretty surprised to see that El Shaddai: The Ascension of Metatron (to give its full title) is actually a fast-paced action platformer, and not a cringe-worthy ‘Bible game’. What did not surprise me, however, is that it’s wacky as fuck.

The game is developed by Ignition Entertainment, who have also brought us such classics as Deadly Premonition and, er, Tornado. It  isn’t due out on our fair shores of Blighty until the 9th September, but there’s a demo gracing the annals of Xbox LIVE and PlayStation Network, so we can give it a go. In traditional Demo Imp fashion I did just that and… well you’ll see.

It begins with the longest list of logos I’ve ever seen. I counted about fifteen, and it takes a solid minute to get to the title screen. I think El Shaddai has been built on a Frankenstein engine, and it’s not hard to see why. The main menu feels decidedly Devil May Cry, which is expected since the dev lead is the man behind the design of Dante, Takeyasu Sawaki. He is also responsible for much of the enemy design, which might explain the frankly bizarre nature of El Shaddai’s cast of villains.

After being given a brief explanation of the controls and the Purifying system, I assume control of the protagonist, Enoch, and am thrust into what essentially looks like a moving oil painting. Okami’s lush painted world is about the only thing that comes to mind, but when a sketched face blowing smoke floats across the screen, laughing maniacally, all of that goes out the window. Jogging forward I get to smash some spikes and get an item. The screen freezes for about 5 seconds, before I get the usual picture and text familiar from the DMC games. Something that hopefully will be ironed out in the full release, although I doubt it. As I grab it, a voice that sounds like Martin Freeman in a cave tells me what it does… oh, and apparently Ezekiel is watching me? 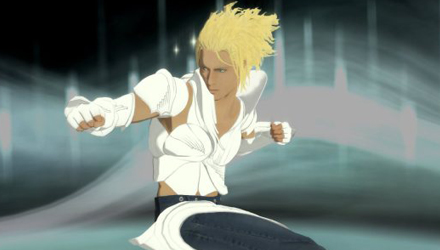 Enoch is harder than he looks... honestly!

Coming across my first enemy, I get a feel for the combat. An unarmed Enoch can do bugger all damage, but by knocking down foes and hitting the Purify button he can disarm them. This also makes said enemy pretty useless, so disarming is a two-fold must. The first weapon I get my hands on is the Arch, a curved blade which makes short work of its previous owner. I head towards some stairs… and the face is back. I have literally no idea what’s going on, where I am or what my goal is.

To be honest, listing all of the mad shit going on in this game would make for one complex impression, so I’ll just make this clear before I continue; El Shaddai is mental. Nothing makes much sense, and everything is more wacky and arty than it needs to be. Whether that’s a good or bad thing is up to you, so try it for yourself.

Anyway, the next group of baddies let me find my feet with the Arch. It’s all based on one button, used in different ways. Hitting it quickly executes fast, weak attacks; leaving pauses and pressing in rhythm unleashes stronger, more flashy moves. Holding it down charges a power attack to break blocks. It’s refreshingly simple as it relies on timing and smoothness, rather than remembering button combos. That’s not to say it makes things any easier; even once you grasp the combat, enemies are still relentless and lightning fast. Also, while every single one of their attacks knocks me back and stuns me, they can easily attack me mid-combo, something which really pisses me off in an action game. Thankfully I can also block, and with good timing this can save my arse.

Next up is a bit of platforming, and the Arch allows Enoch to float for a bit. Which is good, because the angle of the uncontrollable camera makes it tough to land exactly where I like. A little circle of light underneath Enoch helps, but not much. I’m guessing most deaths in El Shaddai will be due to falling off stuff, rather than failing in combat.

Another gang of weird enemies and another weapon, the Gale. Taking the form of sentient, floating daggers, it forces me to use timing even more than the Arch does. Getting it right and making a smooth, sweeping combo feels strangely like flying a kite; you’ll have to play it to fully understand what I mean. While not as immediately powerful as the Arch, the Gale allows some crushing blows with the right rhythm.

Past a bloke in a suit chatting on his mobile about Enoch (?!) and I’m in a boss fight with some old man in a pyramid helmet… with a big eyeball on it. All of his attacks break my block, which is a massive issue considering that there’s no way of dodging, aside from jumping twenty feet in the air. Thankfully he goes down easy, and as this is the first time in the demo I take a beating, I get to see Enoch’s health system. His white suit of holy armour gets smashed with each hit, and getting stripped down to his Levi’s is bad news. 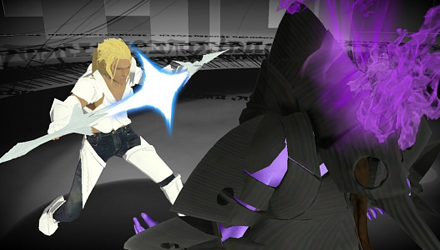 The Arch makes short work of... whatever the hell that is.

After wasting a couple more goons, the game changes again. Now it’s a side scroller, and I have to ride paint waves in the foreground in order to cross big gaps between floating rocks. The face is back. I thought it was Heaven at first, but a mysterious voice tells me that Ezekiel gave up Heaven for this mad paint world. Hmm… and now I get some notes from a bunch of guys called the Freemen, that speak of ‘Nanna running off again’. Now I’m thinking this is Earth, all fucked up for some reason. The sun is going haywire, making it switch between day and night in seconds. The rocks are moving about and there’s a face laughing and blowing. Whatever’s going on, it’s bad, and I suppose it’s up to Enoch to sort it out?

A bit further on, a giant sort of steampunk robot pops out of some black goop, and the guy in the suit shows up, telling me to take his gloves. Apparently they’re the third weapon, the Veil, although I never get to use them because the demo ends there.

My impression is that El Shaddai is the wackiest, most fucked up game to come out this year by far. Even Deadly Premonition was grounded in reality. This feels like the developers just put whatever they dreamed last night in the game, without considering if it made any sense.

I suppose that’s the point though. The combat is solid and simple, although whether it’s a little too simple will require extended play to find out. The platforming is functional, but obviously not the focus of the game. The story makes no sense as of yet, but then again this is just a demo.

More than any demo I’ve played this year, you really have to give El Shaddai a go to decide if it’s your cup of tea. I personally quite like it, although not enough to lay out 40 quid for it. What do you guys think?