FIFA, led by a man who personifies the phrase “compromised”, have been something of a laughing stock in these parts over the past decade. The organisation has been widely ridiculed by a large percentage of British press for their handling of affairs, from bribery amongst their own executives to racism and match fixing via the well-publicised decision to host a summer tournament in a country that makes sitting in an oven feel like a trip to the Arctic Circle.

By now, regular visitors to TIMJ will be well aware that I am something of a sports nut and I love sports games. Ultimately that makes this time of year incredibly exciting for me as we get all the big sporting releases over the few months that sees the transition from British Summer to Autumn. The daddy of all sports franchises over the course of this generation at least, is unquestionably EA Sports’ FIFA. The major criticism of any big franchise is how much it progresses year on year, and with the leap to next-gen just around the corner that question is even more at the front of people’s minds.

I’ve been playing the recently released FIFA 14 demo to get an early idea of where we stand on the current-gen consoles.

As soon as the game loads up you are hit with the single biggest change, and that is that the menus have taken on the tile effect of last year’s Ultimate Team and other games in the EA Sports range, such as Madden. The various tiles represent different game modes, such as Career mode, Seasons and the incredibly addictive Ultimate Team.

The only two playable areas in the demo are Ultimate Team and Play Now, with the latter allowing you into a one-off friendly with any of the eight playable teams. FIFA Demo regulars Manchester City, Barcelona, AC Milan and Borussia Dortmund have been joined by Tottenham, Paris St Germain, New York Red Bulls and Boca Juniors. As always you can set a favourite at launch who will be the default user team in this game mode.

The Ultimate team area will give you a rundown of how the mode works and an insight into the new way you build your team chemistry by linking players from the same club, nationality or league. You are then gifted a group of elite players to use against another Ultimate Team and get to keep them for the duration of your demo session. You’ll also get some additional players after a second game against one of the above mentioned club teams to add to your demo squad. While this is a nice little intro to newcomers (if there are any), for seasoned Ultimate Team players it would have been nicer to actually have the chance to make a start on your own squad in the game rather than just via the web app. 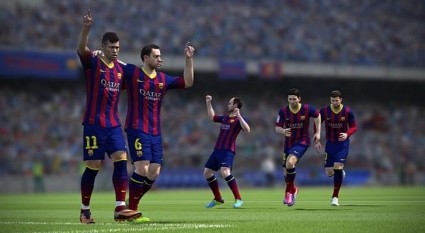 Having picked your game mode and the match-up, the next thing you’ll see is one of this year’s skill games, which you can participate in while the match loads. Unfortunately you cannot select this directly from the main menu. For those of you who missed FIFA 13, these skill games were introduced in last year’s game and follow much the same pattern this time around, with such disciplines as dribbling through some poles before shooting at targets in the goal, to one touch passing into mini goals as the ball comes to you. As with last year they serve as a nice deflection while the game loads and the full repertoire should be a pleasant diversion as much as an educational tool.

Into the match and Jeff Stelling from Sky Sports will introduce you to the big match with the very basic information of the teams and stadium before handing you over to the commentary team of Martin Tyler and Alan Smith. The dialogue between these two appears to be exactly the same as last year, with the general chatter fairly mundane to say the least and repeating far too quickly.

The visual upgrade is also very much a subtle one. Players naturally look like their real-life counterparts and the stadiums are well crafted as they always are but you will be pushed to find any obvious upgrade from FIFA 13.

Out on the pitch, in the games I have played I have to say I have been somewhat underwhelmed. I have found, with default settings, that the game appears to have been slowed down considerably. The players appear to be much slower going through their animations and this has a negative impact on the flow of the game. If I was only noticing this when playing as the New York Red Bulls who have a weaker squad I’d understand it, but when you’re in Ultimate Team and have the likes of Iniesta, Xavi, Ibrahimovic et al and they have the turning circle of a cruise ship, it is a worry. 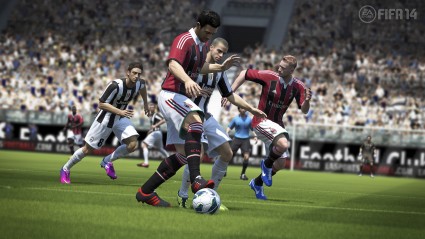 I’m also struggling to see the upgrade in the teammate intelligence as nobody seems to make a move without prompting with the LB button. Even then they literally just run straight forward and so rarely into space or even trying to create space. The final moan is with the first touch. Don’t get me wrong, I don’t want the ball to stick to the players’ feet all the time but Iniesta has gone through an entire decade with fewer poor touches than in a single match of FIFA 14. The ball just seems to bounce off of these world-class players as if they should be consigned to Sunday League, even on a fairly soft, low, simple pass and don’t get me started on how much they lose possession when they sprint!

It’s not all bad, the shooting does seem slightly better than last year with the introduction of both Pure Shot and Real Ball Physics. These make the flight of the ball (on shots from distance especially) pleasing on the eye, and without the ball this is the comfortably the most tactically demanding version of FIFA. You will need to work to win the ball back and use your team mates to press and hold up play to close the space and cover the opposition players.

I’m still excited about the game modes, not least the upgraded career mode, but I’m really hoping there’s one or two tweaks to the gameplay before the September 24th release.