It’s strange, but ever since playing (and loving) Gran Turismo 3 on the Playstation 2, for no apparent reason I seem to have just lost interest in playing racing games. After seeing some of the incredibly detailed screenshots of Forza Motorsport 3, however, my curiosity was piqued. I wouldn’t say that the game jumped out at me, and as I downloaded the demo I was doing so in the mindset that Gran Turismo is still the godfather of racing simulators. Let’s face it though, cars will probably be obsolete by the time GT5 is released (and replaced with Fifth Element style hover-cars, chauffeured by Geordie pandas if my plans come to fruition. Just imagine it…) so I figured that I really should give another series a chance.

As the demo starts, you’re thrown straight into selecting your car for an exhibition race from a list that covers most of the ranges from a Mini to the more beefy Audi R8 (drool). I plucked for the R8 (droooool) and after selecting a jazzy grey paintjob I’m taken to the “How much help do you need to avoid wrapping yourself around a wall?” screen, or difficulty selection.

There’s an impressive range of assistance levels, all of which are fully customisable, and it’s good to see that Turn 10 have accommodated for such a wide range of players’ skills. I went for a middle of the road kind of difficulty with braking lines turned on (basically telling you if you’re going too fast to make it out of a corner intact) and off I went on the open road. The only open road as it happens, as you’re disappointingly only given one course to test your skills on.

As a racing game, the most important thing is undoubtedly how it handles, and it seems like Forza has pretty much nailed the different physics of each car. Drive the Mini like you would a Ferrari California for example, and you’ll get stung by the under-steer before you can say “Get out of the way, wall!” The collisions between cars are suitably crunching, and when combined with the damage physics you’ll find yourself caring a bit more about your car’s welfare.

I definitely wanted to avoid any other contact after being rear ended on the first corner, and I found it to be a simple but effective incentive to take each race seriously. My only complaint with the handling of the cars is that they seem to go absolutely haywire if you veer off the track for even a split second, even if you keep the wheel perfectly straight. The punishment doesn’t seem to fit the crime, and I hope that it’s a little bit more forgiving come release day. 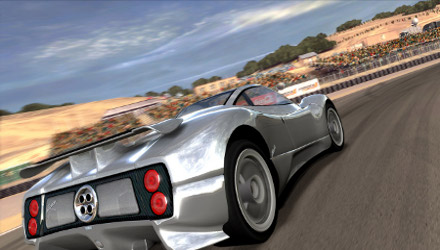 I think it's a testament to my driving ability that I kept this car so shiny... after ploughing it into a hedge

Fortunately, you’re given the ability to “rewind” the race if you make a particularly note worthy c*ck-up of things. I have to admit I did have to use the feature a few times, and it just turns back the clock to a certain checkpoint so that you have a chance to correct any mistakes you may have made. As useful as this feature is for people just learning the game it seems awfully cheap, even more so considering it has unlimited use. I’m assuming that this is either solely for the demo or for non tournament races, but it does seem like a bit of an odd inclusion in a game where the whole challenge comes from learning from previous mistakes.

I don’t know about anyone else, but I take a lot of pride in any cars that I buy, whether they’re virtual or otherwise. For this reason, it’s important that they look good, and Forza has certainly delivered on that aspect. Even though the cars do look unfeasibly shiny before, during and after the races, it does make watching the replays a joy. The level of detail inside the cars is also very impressive, and it’s nice to take notice of the little differences between the interiors of the car, which again contribute to that feeling of pride of building up a fleet of cars that you want, rather than just the ones that have the best stats. The track that I was racing on was also very pleasing to look at (although not for too long obviously) and I imagine that the scenery of some of the more rural tracks will be pretty breathtaking.

The main thing that gets me excited about racing games is the depth; how many cars, tracks, trophies and modifications you can choose from. Unfortunately the demo doesn’t really give a very good indication of that but early signs look good, the level of data that you can review after a race is frankly astonishing, and the game apparently boasts over 400 cars and 100 tracks. However it still remains to be seen just how much content the game contains, and I get the feeling that the quality of the online experience will have a big impact on its shelf life.

Overall, while I wouldn’t quite say that Forza 3 has completely reignited my interest in racing, it’s got my foot hovering over the pedal. I’ll definitely be keeping a closer eye on this title than I would have before, and who knows? I could be ramming you off the road on Live before you know it!