Back in the days of the Sega Megadrive, the NHL franchise from EA Sports was on a par in popularity with Madden and FIFA. Despite me knowing practically nothing about the sport or its participants, it was still a day-one purchase for me, for a few years at least.

Since then, I would suggest that while Madden and FIFA have gone from strength to strength, the NHL franchise has become something of the forgotten cousin of the big EA Sports series. Naturally, this has a lot to do with the fact that ice hockey is still seen as a minority sport outside of North America, Scandinavia and a few of the old Eastern Block European nations, but the times they are a-changin’.

Thanks to the growing popularity of the EIHL (that’s the Elite Ice Hockey League to those not in the know), ice hockey has become the most watched indoor sport in the UK, and is only bettered by football and rugby for winter sport attendance figures. So, there couldn’t be a better time for EA Sports to push the NHL franchise on these shores. It is also one of the games to benefit from the new EA Sports Season Ticket. I thought I’d take a look at the recently-released demo, to see if ice hockey can challenge for the honours in the sports franchise video-game face-off.

In a word, the answer is a quite resounding “Yes”, if this demo is anything to go by. As is now the standard with EA Sports games, the menus are littered with some top musical tracks, that no doubt we will be able to pick and choose from in the final release.  As a sports title we also have some play-by-play commentary, which in the confines of the demo appears to be reasonably varied, and keeps up with play better than most sports titles.

Graphically (again, from looking at the demo at least), it seems we will get the usual detailed competitors and arenas that all the EA Sports franchises usually provide. There also looks to be added depth in the crowd, with spectators that are solid, individual and full of a collection of celebratory animations. The menus look very similar to those in Madden and FIFA, and as such are nice and easy to navigate. There are some nice, neat little touches, like ice spraying up when you make a sharp turn, and the arena view when not on the ice, in the ‘Be A Pro’ mode.

What makes the demo for NHL 12 so good, though, is the fact that it offers you the opportunity to play each of the three main modes of the game, unlike previous sports titles that offer you a single half or a period of a simple head-to-head game (I haven’t seen this year’s Madden so don’t know if the same was implemented). As far as I’m concerned, this should be the case for all sports demos from now on. 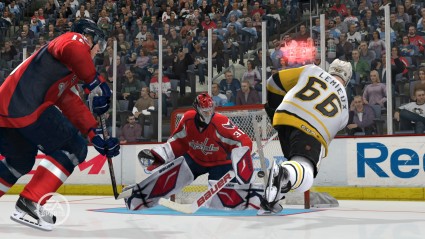 Can you emulate the greats?

Let’s start with the standard head-to-head match. You have the option of choosing either the Boston Bruins or the Vancouver Canucks, and play the third period of a single match. The score at the start of this period is randomly set, so you might play one game where you are chasing a couple of goals, another from the lead, and a third with it starting all square. This in itself makes you approach the game slightly differently each time.

Before you start you are able to alter the length of the period in real time, as well as the difficulty and your line-up (which is also unusual for a demo). This is slightly limited in the fact that you choose the lines rather than the individuals, but at least you get a chance to tinker.

The final option is in the control method. As mentioned earlier I used to enjoy the NHL games back on the Megadrive, and it was nice to see EA Sports include the option to play with the controls from NHL 94 (basically A for pass and B for shoot), lifted directly from that console. This totally simplifies the game for newcomers to get a handle on the tactics, without having to worry too much about the complexities of the shot stick.

Into the game itself, and the default controls involve you moving around the ice with the left stick and passing, primarily, with RT. The more you hold this down, the more power in your pass, making switches of play simple and fluent. The right stick is used for shooting and also includes feints or dekes; move the stick right and left to switch your stick and stance, to try and beat the defenders and fool the keeper. Then, to let fly, you either circle the stick from the side to a forward position for a quick wrist shot, or pull back and push forward for a more powerful slap shot. This method certainly took me a little while to get to grips with, but adds so much to the game from a simple press-button-to-shoot method.

On the defensive side, the RT button becomes the change man option and LB causes you to put your stick down, to try and intercept a pass. The A button lifts your stick and can be used to try and intercept puck or man (usually at the cost of a penalty), and the right stick is used to body-check your opponent. If you get yourself into the right position, repeatedly tapping the Y button will start a fight, everyone’s favourite part of hockey! 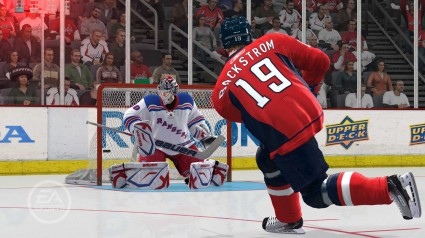 How did he score from there?

Unfortunately, the fight mini-game is probably the worst part of the game at this stage, with the right stick used to throw a punch by pulling back and pushing forward, LT for block, and the left stick for dodging left or right. You will automatically grip the jersey of your opponent, and pulling the left stick towards you will pull your victim, in an effort to get them off-balance.

On to game mode number two, Be A Pro. Here you get to play as a centre called Joe NHL, for one of the same two teams as the main head-to-head mode. When off the ice you can watch events in a Football Manager-style set-up, with a hockey rink at the top of the screen and circled numbers representing the action, or sim to your next involvement with B. Coming onto the ice while play is moving can be a touch disorienting; the camera circles you so you don’t know which way is attack and which is defence for a few seconds, but otherwise play is as smooth and detailed as the main game mode.

You might get set a task by your coach as you enter the fray, such as “make an impact”, or “we need to keep it tight”, depending on the situation. When your stint finishes you have a grading on performance, to help you to see what you’re doing right, and where you need to improve the next time you get out there.

Finally, the NHL 12 demo lets you set up, manage and participate in a tournament of the Ice Hockey Ultimate Team. This game mode first became known to me back in FIFA 09, and I have subsequently enjoyed the soccer and NFL versions in FIFA and Madden. The hockey version follows the same rules, with you getting a starter pack that will fill your squad at the off, and cards for things like injury healing as well. 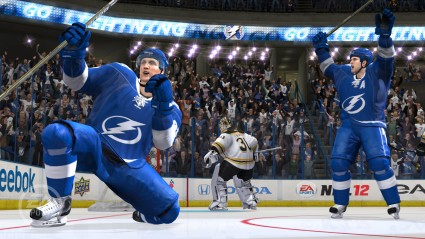 Once you enter the mode, you can adjust your various lines for offence and defence to make the most effective combinations, and can also set lines for ‘Powerplay’ and ‘Penalty Kill’ scenarios, as well as your line-up for shootouts, before taking to the ice in a tournament. The demo does not let you purchase any additional packs or set up trades.

In all modes, games are quick paced, and on the Pro difficulty I found it a good challenge to score without being too frustrating overall.

As demos go, NHL 12 offers more gameplay than any other I have played, especially from the sports genre. This gives you a true reflection of the content and how each mode will play, so you can make an informed decision on whether it is for you or not.

Me, personally? I am starting to save my pennies!