Ninety Nine Nights (or N3) was released way back in 2006 to a somewhat mixed reception. The major criticisms of the game were the often repetitive gameplay and the incredibly steep learning curve. Despite this, however, N3 still picked up something of a cult following especially in the Eastern market and a sequel seemed almost inevitable.

It has taken a massive four years but finally, we have that sequel. Developed by Feelplus and published by Konami, the demo is now available to download and play on Xbox Live and I have been testing the “control-pad-out-the-window” level so that you guys and gals don’t have to.

For those of you who didn’t torture yourself with the original, N3 II follows the same Slash-em-up style as its predecessor, much in the vein of Ninja Gaiden or Devil May Cry (only nowhere near as good). It gives you the impression of a vast open world but the truth is the game is very much an on-rails experience. Strangely your giant oversized swords can take down a concrete tower with a single swipe but a wooden fence is indestructible. 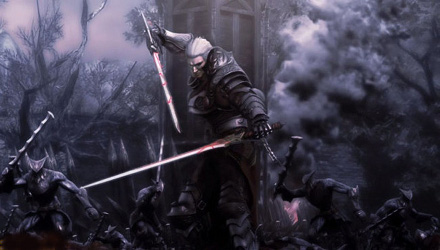 In this demo you get to play as a single character, Galen, with a choice of two weapons. Both are your run-of-the-mill “Giant Sword” fare and can be combined with magical “skills” such as lightning bolts or quakes. Again, if you have played the likes of Ninja Gaiden or Bayonetta you’ll know exactly what to expect with these.

You have a choice of two missions. The “Orphea Castle Gates” gives you a feel of the general level structure while “The Behemoth” shows you a standard boss battle.

Let’s begin with the “Orphea Castle Gates”. The level opens with you faced up to a small army of some forty or fifty and when I say this is just the beginning, I mean it. During the course of this single level your kill count comfortably reaches 1000. At any one time you may have some 100 enemies attacking you at once and the combo potential is huge (I managed 789 hits at one point).

The unfortunate side to this is that, in the demo at least, there is absolutely no variation. Enemies are fairly lifeless and tend to just walk towards you like lambs to the slaughter. You get the odd swipe from behind while you’re in full swing but if it were not for the sheer volume this would be a walk in the park.

Throughout the level you are given additional objectives such as destroy the tower or kill all the enemies but essentially all you need to remember is to keep hitting your quick and strong attack buttons (X and Y) as quickly as you can. At the end you will be faced with a mini-boss who is much tougher to beat and failure at any stage sees you having to start right back at the beginning. Something which on more than one occasion had the “control-pad-out-the-window” level tipping slightly past the “swear-abuse-at-the-screen” stage.

The Behemoth is essentially a giant flame throwing dragon and is surrounded by hundreds more minions. As is always the case with boss battles you need to find its weakness and exploit it. Again, if you fail at any point its frustratingly back to square one. 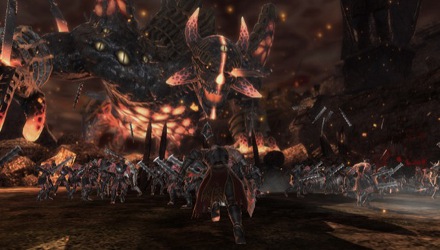 At no point in the demo did I notice any slowdown on screen which is something the original really suffered from. In fact, the graphics overall are good. As you slaughter the swathes of enemies, body parts and blood spatters fly across the screen. The animations are good and the backgrounds are grand giving the game a dark, gothic feel that really fits comfortably. Likewise the background, orchestral musical score plays its part in setting the tone of the game.

N3 II is a fairly short demo in truth and in all honesty it is difficult to say at this stage if the full game will suffer from the same issues that hampered the original. The short video you are presented with if you wait on the start screen is blighted with the slowdown that was rightly criticised first time around and though the individual level that you can play is easy enough, the lack of a checkpoint and the unforgiving boss battle suggest that this too may be a challenge.

We’ll find out on September 10th when the game hits the shops.