One of the cool bonuses I got for purchasing Dragon’s Dogma was early access to the Resident Evil 6 demo. Being a games writer and seeing the rare opportunity for an early impression I downloaded it as soon as it was available. You can see how disappointed I was here; the demo pretty much put me off buying the game altogether. It’s one thing giving in to hype or rumour but the proof is really in the pudding, and from that early demo the pudding was incredibly sour.

Imagine my surprise when I found that the recently released public demo was in fact entirely different to the one I’d played before, which meant there was a chance that Capcom had listened to the heavy criticism and sorted things out.

NOTE: I suggest you read my previous article; to impress how much has improved I’ll be referring back to my opinion of the early release demo regularly.

I’ll come right out and say it: Capcom have knocked it out of the ballpark. The clunky, stodgy control of the early demo is gone, replaced with a smooth fluidity that thrashes Resi 5 and stands shoulder-to-shoulder with the sharpest shooters of our time. Bullets land with satisfying impact and combat is fast, furious and incredibly tense.

A few of my personal niggles have been expertly nerfed too. Whereas before you had to tap RB a bunch of times to replenish your health pill-by-pill, you can now simple tap it repeatedly to select the amount of pills to take and munch them all in one go, making healing a snappy and simple action. The mystery of the Green Herbs is also solved; by holding RB and hitting X you convert the herb into pills with zero effort.

The levels on show in the early demo were pretty awful. Leon drudged through an empty school before engaging in a few fleeting seconds of stodgy combat. Chris gallivanted across rooftops with the worst cover system ever, getting shot at by massively accurate J’avo goons and finally being overwhelmed from all ranges and angles.

Jake’s section was the worst; a miserable boss battle that had to be fought while being hounded by infinitely spawning enemies. The new character to the franchise, Jake himself was also disappointingly under-developed. Well, I’m happy to say that the stages on show this time around are fantastic and hopefully give a much better impression of what the final release will really be like.

Leon and Helena’s section starts with the same cutscene as before, but this time leads into a tense and dangerous run through the college as they try to escape. Hitting the courtyard they find a locked gate and must cross said zombie-packed courtyard to reach the building housing the key. The controls are infinitely better than before, allowing you to roll, dive and slide around like a pro. Leon’s mêlée capabilities have been enhanced too, so taking on a surprise walker toe-to-toe makes you feel like Jean-Claude Van Damme; all high-kicks and bone-breaks.

After finding the key and busting out, the pair grab a cop car and (in a scene that will be fondly nostalgic to Resi 2 alumni) attempt to escape, only to flip the car in an impressive fireball. Climbing out, they decide to take the sewers and that’s where the level ends. Showing perfectly how Leon’s sections will be full of the same frantic but tactical action that made Resi 4 such a stone-cold classic, playing this section alone restored much of my faith in Capcom to get this instalment of my favourite game series right. Resi 6 is a game of 3 parts, however; so a lack of improvement in the other sections could still ruin its chances of success. 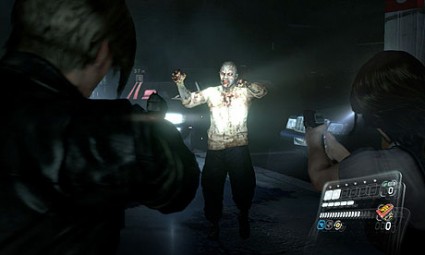 Working together is the key to success.

Not to worry; Chris’s section is awesome too. Kicking off with an inspiring speech to his BSAA strike team, Chris leads them into an Eastern-European town to wipe out a new bio-organic threat. It plays out like a bombastic military assault, only with mutants. The cover system is still a little clunky; aiming next to a corner will slip you into cover but you still have to aim and press A to use low walls. However, it’s a vast improvement and quickly becomes very usable.

There’s no shortage of ammo either, with Chris and his mates having copious amounts of lead to cause havoc with. In the entire section I only had to switch to my pistol once and that was during the boss fight. Oh yes, the big bosses are back with a vengeance.

After crashing the party through two entire houses, the ugly son-of-a-bitch here nearly flattens Chris and new partner Piers before joining them in a nicely enclosed street for a good ol’ fashioned boss fight. Climbing up high and pounding the obvious, throbbing red vein on its back is about as old as tactics get, but feels comfortable given the situation and the context.

After pissing the beast off enough he makes his escape and, assisted by an APC, you give chase. Ducking in and out of the APC’s shadow to pop off J’avo scum feels fantastic and surprisingly different from Leon’s section, despite both having the exact same controls and mechanics. Soon you reach a train car that’s blocking your path and have to protect a rookie agent as he rigs the old wreck to blow. After a tense and exciting stand-off, the thing goes up in flames and you and your team slip coolly underneath it as it goes sky-high. So another feather in the cap then, but can Jake’s section live up to the stellar performance of the others? 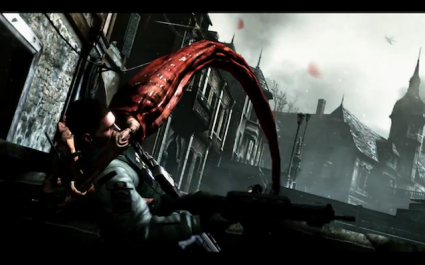 That's not quite what Piers meant when he said he wanted to get 'up close and personal' with the bad guys...

Hell yes. Caught up in some sort of C-Virus experiment, Jake is surprisingly nonchalant about his situation as Sherry Birkin, now a grown-up Secret Service agent, swans in to rescue him for whatever reason. Story elements are pretty light in this section but thankfully the action is not. With both characters getting an armoury to play with you can really experiment and get a feel of the range Resi 6 will have to offer.

Dashing and rolling through Hong Kong-style streets and alleys fighting mutating J’avo, there’s a sense of roughness that differentiates Jake and Sherry’s experience from the others. Jake is a mean fighter and can put an enemy down in a few hits, but still can’t take on a group without getting whacked. I’m guessing this is intentional and not an error, but still. They both get a pistol, magnum, assault rifle and sniper rifle to use, and switching out dependent on the enemy is a cinch using the D-pad.

The avoidance mechanics really get a workout here, as one minute you’re mobbed by machete-wielding nasties and the next you’re getting peppered with lead from a nearby balcony. While executing some of the moves can be a little hit and miss (a drop-and-slide manoeuvre is done very similarly to a standard roll) the ability to dive to the ground and stay there whilst pumping lead into your assailant is pretty cool. There’s nothing more cinematic than getting dropped by a J’avo only to blow his head clean off in retaliation before you even stand up.

There’s a bit of typical Resi co-op here too, with Sherry running across balconies and awnings to unbar a door while Jake holds his own against a bunch of nasty green spitting lizard-things. The constantly evolving J’avo keep you on your toes and the relentless action combined with the grim surroundings strikes a nice balance between Leon and Chris’s sections, but at the moment it’s hard to tell what’s special about Jake’s story. I’ve read that his section will focus on story-telling more than the others, revealing some interesting facts and secrets long-time fans will go nuts for. I only hope this is true, otherwise Jake’s section may end up being a fun but needless part you do just because it’s there.

There are still questions to be answered. In all my playthroughs I could find no way of trading with my partner. If this issue remains in the full release it’ll certainly hit a lot of people that played Resi 5 through together, myself and my friend included. Holding B to issue orders to your buddy automatically swings the camera round to view them, which is nice if you want to find them but irritating if you just want to snap off a quick command.

How these niggles will impact the full experience is impossible to predict, but I’m guessing that, as usual, the overall awesomeness of the Resident Evil experience will allow us to forgive a few foibles. The fact is, no Resi game is perfect and this fresh demo gives a supreme demonstration of what Resident Evil 6 will offer us; a slick, gorgeous, cinematic experience of the quality we’ve come to expect from the series.

It looks, sounds and plays like silk, with barely a rough edge or crude animation in sight. The new enemies bring fresh challenge to the series while still retaining the classic Resi tone and style. Bringing franchise heroes Leon and Chris together is a classy move, while the newcomers seem to be fleshed out enough to be worthy of inclusion for the most part.

The big test will be how the story holds up. If Capcom can weave a complex narrative that includes all the characters, playing on Leon and Chris’s histories and bringing in the new character’s fresh insight and attitudes, all whilst simultaneously blowing our minds with epic action and intense horror, then we very well could have the greatest Resident Evil game of all time on our hands. After each section of the demo the release date comes up on-screen: 02.10.12. That day cannot come too soon.