The future is looking mighty bleak indeed, if the world of Warhammer 40,000 is anything to go by. In this future gloom, mankind lives for war. Serving the Emperor is the highest honour, and a brutal death on the battlefield is a good death. Computer-games were made for worlds like this. Yet strangely enough, for all the ample opportunity provided by Warhammer 40,000 to spill blood and guts by the gallons, we have yet to see a solid over-the-top shooter that throws you right into the thick of it… until now.

Space Marine is the game all Warhammer fans have been waiting for, and who would be better suited bringing the carnage of the Warhammer battlefield to your screens, other than developer Relic? After all, they have been living and breathing the chaos and cordite since 2004’s Dawn of War.

This is a big departure for them though. They are leaving behind the comfort of the top-down perspective from their previous Warhammer RTS games, and heading straight into the battlefield itself, in a brutal third-person shooter. A daunting task for a developer who have built up a strong reputation over the years for making quality strategy games; if the demo is anything to go by, however, they are well on their way to mastering the third-person shooter as well.

The brutal and unforgiving world of Warhammer 40,000 hits you right in the face the second you begin to navigate the game’s menu. The demo comes with two single-player missions, ‘The Inquisitor’ and ‘Battlements’, to give a flavour of what to expect in the full game. You play as Captain Titus of the Ultramarines, and the first part of the demo starts just as Titus and his squad have crash-landed on the outskirts of the Manufactorum, a giant factory under siege by an army of Orks looking for something.

They quickly descend the wreck and find a lone servo-skull, trying to deliver a message from an Inquisitor. The Inquisitor is trapped somewhere inside the giant factory, trying to protect an ‘experimental device’ that must not fall into Ork hands. Moving deeper into the Manufactorum, Titus quickly comes face-to-face with swarms of Orks. The strength of the ‘greenskins’ (as they are affectionately known) comes from their numbers, and this is how you will often encounter them in Space Marine.

At this point, wave after wave of Orks decend upon Titus and his men, so this is where an Ultramarines arsenal comes in handy… and what an arsenal it is! Warhammer fans will likely shriek with glee as they finally get their hands on the Bolter and its many variants. However, the shrillest of shrieks will undoubtedly be as they rev up the chainsword. What a magnificent weapon this is! For the uninitiated, a chainsword is basically a vicious chainsaw shaped as a longsword, giving you extra reach to connect cold steel with green flesh.

This is one of the finer melee weapons in any game ever, and the thrill of the carnage as you chop your way through hordes of Orks will linger, long after the last Ork lies cloven in two by your feet. Of course, the full game will have many more weapons on offer, but the chainsword will likely be an instant favorite. 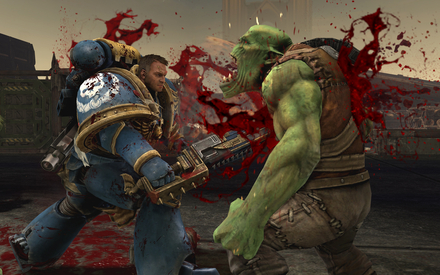 Hold still! This will only hurt like hell for a second!

As Titus moves deeper inside the bowls of the Manufactorum, he has to fend off more Orks of various shapes and sizes, until he eventually reaches a lift that will take him deeper into the factory, and closer to the Inquisitor. Only problem is, the lift isn’t there, so Titus and his men have to fend off wave after wave of Orkish hordes as the lift slowly makes it way up.

Individually, Orks are quite easy to dispatch, but when they attack in force, any Space Marine is in for a tough fight. This part of the demo is no exception. The key is to be on the move constantly, and this makes Space Marine take a big side-ways step away from the game many are comparing it to: Gears of War.

Let it be said straight away: this is not simply Gears of Warhammer, although the comparison is rather obvious at first glance. Big guns? Check! Big hulky space-suits? Check! Plenty of testosterone? Big check! But where the action in Gears can drag on because of the constant ducking from cover to cover (and I mean that in a good way), Space Marine thrusts you right into the action, and forces you to constantly be on your toes.

As an Ultramarine, you’re tough as nails; only sissies duck behind cover. Concepts like ‘subtlety’ and ‘stealth’ aren’t part of the Ultramarine field manual either, and it shows from the very moment Titus emerges from his crashed transport, and revs up his chainsword. There are no health packs to regenerate lost health, but you can rest for a few seconds to heal. Eventually, you will start to feel Death breathing down your neck, but you can fight it off if you manage to pull off a brutal execution move on an enemy. Not only does this look incredibly cool and bad-ass, but it will also instantly replenish your health.

This is a great way to keep the action flowing, and is further underpinned by responsive controls. Switching from guns to melee is done with just the touch of a button, making Titus immediately swing his melee weapon in a wide arc. No need to rev up a chainsaw-bayonet first; Marcus Fenix could learn something from that. 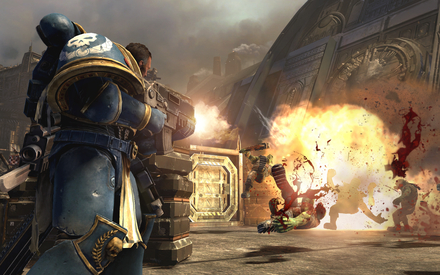 These Orks thought they could take on a lone Space Marine. They thought wrong!

The other part of the demo is Battlements, and plays out very much like The Inquisitor except for one crucial difference: this time you have a jump-pack strapped to your back! This allows you to jump and reach areas high up. That’s all fine, but the real advantage comes from the special dive attack you can perform. This can squash or stun enemies who are unlucky enough to be in or around your area-of-effect as you blast down from above.

The aesthetics are spot on for a Warhammer game, yet compared to other games in the genre, I can’t help but feel that it looks a bit dated. It may not serve up as many awe-inspiring vistas as other shooters, but what it lacks in graphical punch it more than makes up for in audible wallop. From Bolter-shots to battle-cries, Space Marine sounds great, and all the above combine to make the world of Warhammer 40,000 come to life in all its blood-soaked glory. More importantly, it perfectly conveys the strange kind of intimacy you will develop with Titus, as you experience the battlefield from behind his broad shoulders. This is sure to please the fans who have been crying out for something like this for a long time, but will also appeal to people who simply love a solid shooter.

As solid as things look now though, my biggest worry is that Space Marine will try to stick too rigorously to its own formula. While killing hordes of Ork is incredibly fun, it could get tiresome if the game doesn’t mix things up a little. This is what works well for other over-the-top shooters like Killzone and indeed Gears of War, so this puts Space Marine in an awkward position. Space Marine might look like Gears at first glance, but it’s trying hard to not be Gears and win our hearts on its own merits. This is very commendable, but my worry is that it will try so damn hard to be its own, that it will lose sight of what made said games great shooters in the first place.

Hopefully Relic will prove me wrong, because as things stand now, Space Marine has a lot going for it. Now, stop reading this and go serve your Emperor, marine!