You can’t escape it, the World Cup is coming. You’ll try your hardest but if you have no interest in a sport dominated by millionaires that roll around on the floor a lot there’ll be no ignoring it. So instead of fighting it, let’s have a look at EA’s newest attempt at making their no-doubt incredibly expensive licensing deal pay off.

Let’s look at EA Sports 2014 FIFA World Cup. Yes, that’s the full title. If I write it any differently, Sepp Blatter himself will chase me down in his Rolls-Royce fueled by orphan’s tears. Allegedly.

Does it look much different to Fifa 14? I wouldn’t know as this is the first year for a good while where I didn’t buy Fifa. Even to my untrained eye, this looks more like a slight cosmetic change than an upgrade.

EA claim that the game will have ‘100’s’ of new animations and the ability to head the ball in a more realistic and physical manner.

“With new over-the-back headers, defenders who are able to will leap higher than the player they are marking can clear the ball in the opposite direction.” 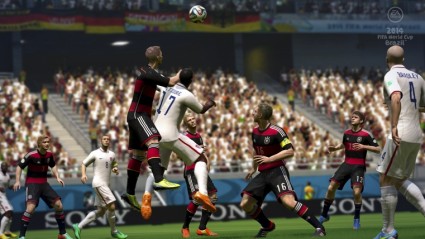 Adding to the polish of the title is promise of in-game cutaways which show how the action is being received in the team’s respective countries. For example, England getting knocked out on penalties to Germany will show a saddened though in no way surprised crowd in Trafalgar Square.

Need more convincing? EA’s got a whole site dedicated to convincing you that this is more than a cash-in. Make up your own mind (or don’t) on April 15th when EA Sports Presents FIFA Corporations World of Football Cup VideoGame Alpha Edition releases. Got one of those new-fangled consoles? Unlucky, as this is only coming out for 360 and PS3.

Wait. Is that the sound of a Rolls-Royce engine?