Another year, another day, another BAFTA award show. By now you all know the winners and the not-winners, so I won’t go through all that again. This was my third year covering this event, and I feel like I am beginning to get the hang of it. They are never especially well organised, from a press point of view; I did not get my final confirmation email until about thirty hours before the start of the event, but this disorganisation is a part of the charm. It is nice to know you are among mortals.

I was greeted by Kristoff, one of the event organisers, and was delighted that he recognised me from previous years. I have arrived. This year was to be a bit different, though, for me as I was actually given an interview spot on the winners’ line up. Technically I had been promised this in previous years, but this time I was really promised. The following is an account of some of the day from my perspective; I will write up the rest in a subsequent post.

Being as I am always early for these things (and they always start late), I took up residence in the lobby of The Hilton. I was privy to a conversation between a hotel guest and the employee who was cleaning his shoes, and I was not particularly impressed. I shared it on my personal Twitter feed at the time, but I think it warrants repeating here.

Guest: What is going on here? What are the film crews setting up for?

Shoes’ Polisher: Oh… it is for some function taking place later… an award show for video-games. There won’t be any celebrities, or anything.

Guest: An award show? For video-games?

For real. I think this says quite a lot about the perception of games, even today. I just think that there is still a massive misunderstanding about the industry as a whole. Games do not come from nowhere; and they take a skill to make. They don’t just appear. I chose to keep my mouth shut at this, probably for the good of all.

As it is, thankfully that did not set the mood of the day. I was shown to a spot behind a velvet rope, ready for the Red Carpet arrivals, but was moved to a better location; right next to the door. All the better for bagging interviews, etc… but goodness me it was freezing! I was wearing a fairly tiny dress as I was expecting to be near the back where I normally am.

My first big interview came from Ian Livingstone, founder of Games Workshop and author of the Fighting Fantasy novels. I asked him whether we could expect a revival of the Fighting Fantasy ‘Create your own adventure’ novels. I believed I would get a “that would be a nice idea, but no” type answer, but I was thrilled to learn that he is working on another novel to celebrate thirty years from the publication of the first novel. This will be available in various different formats, including Kindle. This news made me very happy, as I devoured them as a child. 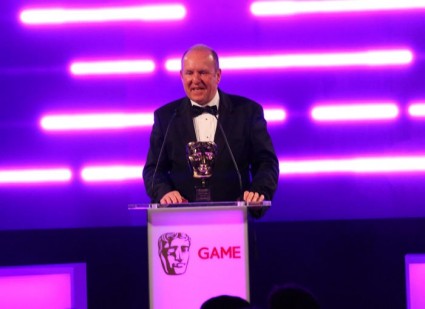 Ian Livingstone announcing the winner of the Special Prize.

When questioned about how he felt about the Special Award and its recipient, he had this to say:

“This particular award is going to a man that has been original, innovative and has gone against the grain. Triple ‘A’ games will continue to sell; that is always going to drive the industry, but on the other end of the scale you have incredible innovation whether on iPhone, Facebook… These are very exciting times.”

“I was a gamer for a long time, then took a few years out, but it’s kind of had a bit of a resurrection in the last few years. I go through phases [with which games I play]; I was a bit behind on Assassin’s Creed. I’ve spent many hours on that and I am still finishing my way through Brotherhood. Also I’m filming a new show in Liverpool called The Good Cop. I play the good cop whose best friend is beaten and murdered by a gang. He’s then torn between doing his job or going after the guys and getting revenge.

There was a particular night we were doing a car chase sequence so under strict supervision I was out… So I had a full night screaming up and down the dock roads of Liverpool and when I got back I kind of had this urge to go out myself, but no. So Forza became my wind down of choice!”

The Good Cop comes out at the end of April (probably) and will be on the BBC.

The highlight of the earlier part of my evening was chatting to Aaron Staton, who was both presenting an award, and nominated for one; Best Performer, for Cole Phelps.

“I’ve been playing games since I was five, so to be in one is surreal in itself and when I was doing it I was wondering how it will turn out. It is surreal to be here, and to be recognised in a way.”

Staton spoke passionately about games, and their place in our world as a medium for telling a story in a new and interesting way:

“I think it speaks to the medium’s value, and how it is changing. The opportunity that telling a story in this medium affords… I think by the simple fact that you have twenty-five, forty, a hundred hours to tell a story; you combine that with every year that goes by that technology evolves and we are able to get it just a little bit closer to things as we see them.”

Aaron and I bonded over the fact that we both have young kids. Our conversation (by this point that was what it was; not an ‘interview’):

“I started playing when I five, and I didn’t stop when I was twenty, twenty five or thirty… I still play! I don’t think I’ll pass it down to my son yet, because he is twenty months old!”

“Really!? What does she play?”

“I just give her the controller… she has no idea that what she does with it has any bearing on the screen, though!”

“Really? Cool! On the Xbox you create an avatar. There was about a month where he would get a kick out of it, and he would call avatar ‘guy’. [At this point Aaron did an impression of his son shouting ‘Guy!’] Then he’d figure out how to make him turn, etc…” 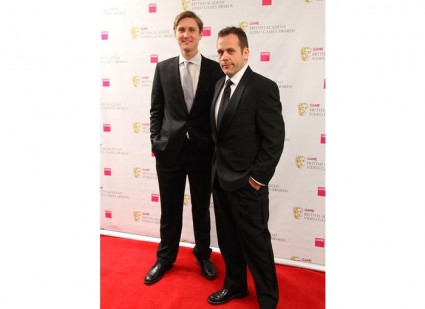 Here he is arriving, and looking nice and relaxed. (Aaron is on the left.)

His humility and downright loveliness came out once more (it was never hidden very well) when I asked him what it meant to be nominated for the part of Cole Phelps considering what Phelps means in terms of character design and technological advances in game animation. His “thank you” was quiet and very genuine, although I didn’t ask purely to flatter him; it is the truth. He replied that “99% of the reason I am here is the technology.” I doubt that very much.

Anyway, we got chatting about the actual process of the making of Phelps. The recording of his facial movements is well documented, and from what he was saying it sounds strangely restrictive for a technique which gives the audience so much depth and insight. The body movements were motion captured, and Aaron expressed amusement at the fact that they were so good that his wife could recognise his walk in Phelps.

Unfortunately he had to actually attend the award ceremony. I would have been quite happy to leave and continue our conversation over a pint in the nearest pub, though. As soon as he had gone I realised I should have tried to set up a play-date between his son and my daughter. Next time, next time. He needs to be in more games.

The final group to enter via The Red Carpet was Jonathon Ross, his wife Jane Goldman and their son Harvey. They were already running late for the dinner, and yet stopped for us as “otherwise [you journalists] would be standing there looking pathetic and unloved. We care about the online community!” 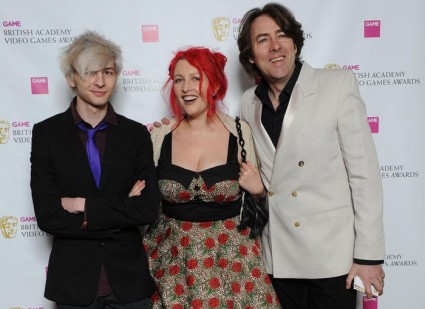 Jonathan Ross with his wife, Jane Goldman and their son Harvey.

When asked how he felt about presenting an award he said:

“I am presenting the award for the greatest game in the Universe up to this point, and that should be Ghouls and Ghosts; 16-bit on the Mega-Drive… or King of Fire on the Neo-Geo. Seriously; who is nominated?”

He asked us. He then gave us no chance to answer and proceeded to name some games he thought might be:

“I would guess Call of Duty, Batman… Mass Effect 3… that’s too late, right, and one of the Uncharted games?”

Good to know he’d had a look at the list of nominees before he got there!

Ross began to rabbit on without pausing for breath.

The thing is, you don’t get into that category if you haven’t made a really good game. They are all immersive, incredible, you want to come back for more. Brilliantly written, brilliantly designed… I’d be happy for any of them to win.”

Which is great, but he had no idea which games he was talking about.

Despite running late, Jonathon and his family had a lot of time for us, and I could transcribe everything he said, but it would take forever, and probably would lose you all. Needless to say, though, it was very entertaining listening to them. It felt more like a private comedy show than an interview.

This was highlight number 2 of the Red Carpet for me. I was very pleased the very end was worth waiting for, as my teeny tiny dress that I was wearing meant that I now had hypothermia. (At one point I thought Craig Fairbrass was going to offer me his jacket.)

So that is my Red Carpet report. I spoke to a few other people on the way in, but the above constitutes the edited highlights. I’ll post again with my thoughts on the awards and winners, and about how I finally managed to get hold of two of my gaming heroes, having wrongly assumed they would have entered via the Red Carpet and through the front door.