What an event! I had intended to live blog through the show, but with all the interesting panel sessions, excellent networking opportunities and after conference activities there was simply no time to put anything up during the conference. This was an excellent view of the games industry from the inside. An industry that is working out news ways to turn a profit and pay for itself. As such, I overheard a few comments that in many cases the speakers could have been talking about any industry and any consumer; the nature of games and gamers themselves seemed sometimes to be an afterthought.

The first day kicked off with Ian Livingstone giving his views of the industry. Setting out the lay of the land, he talked about the Games Industry being under a new Government which may not know that it was dealing with an industry which would be worth $90BN in 2015. He felt we were in exciting times, times with a lot of innovation and a great take up of computer games by people, with ten million WOW players, twenty Million on Moshi Monsters, and with over one billion people on Facebook soon. It was an optimistic keynote that echoed feelings that the games industry was not getting the recognition it deserved, despite its value and popularity. 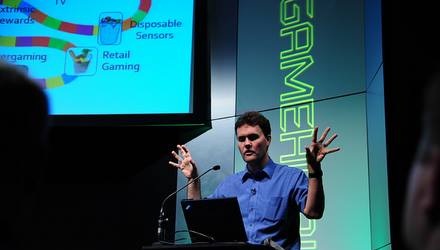 Jesse Schell showing us the route to hell (via gaming)

Moving on, we listened to Jessie Schell the CEO of Schell Games. ‘Roadmap to the Gamepocalypse’ in his view how as games continue to enmesh themselves more and more into our everyday activities, game designers face a host of new challenges. He posited that we players had a desire for authenticity and as such, real life was reaching out to games and vice versa. He saw many systems that gave away points for every day activity that relied on a game mechanic, citing Mind Bloom, Foursquare, et al. which all made a game out of everyday activity and travel. Coupled with social networking, micro-transactions and small wireless devices this had the potential to move us into the ‘gamepocolypse’ where our lives would be a string of endless games. However, Jesse’s contention was this would not be a good thing and referencing ‘Punished by rewards: The Trouble with Gold Stars, Incentive Plans, A’s, Praise, and Other Bribes’ (Boston: Houghton Mifflin, 1993 / 1999). He felt the tendency to reward good behaviour, made good behaviour seem like a task and eventually hated by the player. Writ large, this could spell doom for humanity, or so it seemed; in an interview later I asked him what his feelings were for the gamepocolypse. He said games that encouraged good behaviour, like the Nike+ system were great, others which made bad behaviour compelling were not. His full slide deck are available here.

He also felt that games lacked the emotional connection for most players which would only come via a natural spoken interface. He compared this to movies pre and post the introduction of voice. His position was that before voice they were not accepted as a serious art form, and after voice they were.

Jessie is also working with Nils (see below) on a game based on ‘The Mummy’. With 125 million gamers worldwide he sees games in the ascendance. He is happy working with Bigpoint games as in his opinion he sees great potential with Europe ahead of the USA in technologies such as micro-transactions. 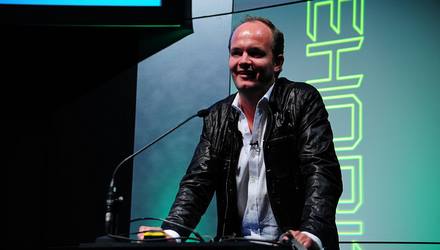 Nils shows us his Bigpoint Games

Nils Holger Henning, the CCO of Bigpoint Games, one of the biggest online gaming companies in the world, was up next. His emphasised the size of worldwide online gaming, which is currently at $12 bn and in 2013 will be worth $20 bn. The statistics on his own company were no less impressive: They have 250,000 registered users a day, and have 120 million customer accounts, which is greater than the total numbers of consumers!

What can explain these figures? He spoke about the pull of browser based games as they had such a low barrier to entry; they are mobile (can be played on any PC), were free to play and could be played at work. Micro-transactions for in game items were paying for the free to play model, which were currently worth $9 bn now. In his view, fixed price models for games were always wrong as they were either too low, so some big spenders are not paying all they could, and in some cases it will be too high so some players would not be able to afford the game.

As these games cost less to produce than the triple ‘A’ titles we are used to on the consoles, a glut of games were available. He now stated that marketing costs were seven times the production cost and while many companies would have the resource to develop a game, actually getting to the consumer’s attention was very hard for them. As such, his company wanted to do more with third parties and have created a specialist ‘Development Lounge’ where a developer can introduce their games to their enormous active game community. The development lounge would allow developers to position their games in a place where they could attract a big audience and benefit from the collective marketing push.

Nils also showed off two games, Poisonville (due for release in Summer 2010, to be launched at Gamescon) and Battlestar Galactica Online. Both games were MMOs and both provided close to console graphics (think PS2 on Poisonville, and decent mid range PC for BGO). These games would be playable on any system (including netbooks) with the same level of graphics as they would run off a graphics engine based in the browser (Unity) the actual graphics card of the machine you were using, and your platform would be irrelevant to the graphics quality of the game.

While Poisonville looks like a MMO GTA San Andreas, Battlestar Galactica looked amazing and choosing your faction would soon mean diving into massive epic space battles at work, on the move or even at home!

With the cost of triple A titles, consoles and game pushing game making and playing into an elite club, are browser based games the way forward? Leave your comments below!