When Sony announced this week that it’s time for the PlayStation 2 to take the well trodden console route to Dignitas, I realised that even though I hadn’t played on one in years (the last one I even saw was in a hotel room in Edinburgh a couple of years ago, I’d sneered at it), most of my favourite gaming memories are centred around that black rectangle of joy.

I’d had three of them (I broke the drawer on one when drunk, one fried itself, the last one exited my third-floor flat via the window, due to an attack of petulance when my kid brother destroyed me 6-1 at Pro Evo). It had been the dependable, Paul-Burrell of a companion though my formative living-away-from-home university days, and it being “finished” was closing a chapter in my life.

Launched in 2000 when I was 20, much later than I thought it had come out, it became the best selling console of all time, shifting 150 million of the bad boys and 1.52 billion games. These figures firmly putting its size 12’s onto the face of the Dreamcast and Gamecube, and crushing them into the mud.

I personally flirted with the main titles. Tomb Raider: The Angel of Darkness I completed, but only as I was constantly hopeful Lara would take her top off at some point (double Easter Eggs!). Grand Theft Auto 3 was great and changed the gaming landscape for the better. I wasn’t as in to it as my flat mate at the time, Big Face Lewis, who would take a week off work every time a new one came out, thus always making me feel inferior to his commitment. Gran Turismo 3 was a new breed of race game; once again I had a friend who would spend his time micro-tweaking his car’s set-up and then testing it, hence setting times none of us could compete with. He now surprisingly actually has a wife. A real human one. 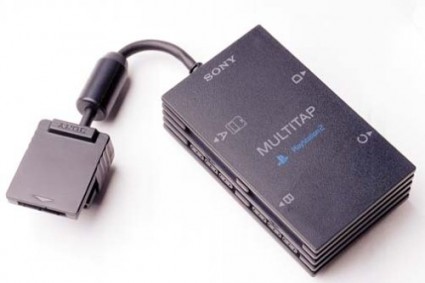 This was essential in my former circles…

For me, the power of the PS2 was the social aspect; that dragged me in. Nowadays we don’t need to see, smell or entertain our friends as we have Xbox Live and the shabby PS3 online thing that I hate, but back then (and maybe because it coincided with me living in halls and shared hovels), we used to have to be in the same room to play these games. This wasn’t a new thing, but the games just made it all-encompassing.

Games like Tekken Tag Tournament were great for a night of lazy boozing and gaming (I’d skive lectures to practice King’s Rolling Death 13-hit combos). Track and Field with a Multi-Tap was where we would give different names to the competition, depending on who was there (“AAA” if it was the poorer players, right up to an Olympics once every four weeks). We even had a little drugs scandal, when we decided to ban the use of socks on fingers to help mash the buttons.

Pro Evolution Soccer was our football game of choice back then, and SSX Tricky ruined our lives, but it was the fairly underground game of Circuit Breakers that made the PS2 for us. Played incessantly for years, it was a top-down racer with weapons, a bit like micro machines, and it just hit all the spots. It was exciting, it was competitive and it kept us rapt. Sad really.

That’s all over now. The PS2 is gone forever, like my youth and the ability to fit into 32″ waist jeans.

Now we wait for the 720 and the PS4’s more impressive graphics and gameplay, but we still won’t be in the same room to see the face of our vanquished foes, and the excitement that these games could bring out in us. Constant evolution is great and right, but it’s still sad when something, however much it’s forgotten, goes the way of the Big Bopper and with it your memories.