Modern Warfare 3 may be the most anticipated video game of all time, but it’s also one that’s been marred with controversy. Infinity Ward is a whole new development house, as most of the original Modern Warfare team have now joined Zampella and West over at EA’s Respawn. As such, there were grave concerns that this new, young team being tasked with the biggest video-game franchise of current age systems, would cripple under such enormous pressure.

Well, at Eurogamer Expo, I got extensive hands-on time with MW3’s new Survival Mode, and after I was done; my brain would only allow one word to come out of my mouth.

I’ll get this out-of-the-way right now; I don’t like Modern Warfare 2. I prefer Treyarch’s style of CoD development, and found myself enjoying Black Ops much more as an overall product.

However, there’s something instantly appealing about Modern Warfare 3’s Survival Mode. The game does take a lot from Gears of War’s Horde mode or CoD Zombies, but it also manages to put its own unique spin on things. Essentially, it is you and a team-mate fighting against waves of different enemies while trying to survive.

However, there is a large emphasis on how well each individual player performs in a wave. Your performance will determine how much cash you are rewarded at each wave’s conclusion, and, therefore, allowed to spend on upgrades in the intervals between each wave. Get a kill-streak, keep pulling off headshots, don’t take much damage, and constantly revive your team-mate; you’re going to be rich beyond your wildest dreams. Do the opposite; your pockets will feel a lot lighter… 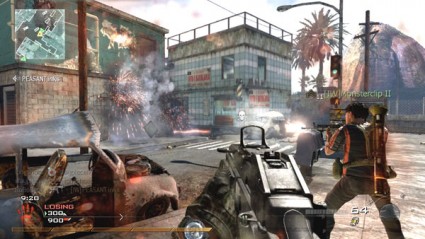 Once more unto the breach.

Fortunately, when you defeat an enemy, you can actually pick up their weapon and keep them through the waves. As you might expect, the further along you are in waves, the better the weapons that will drop.

Each wave gets increasingly harder. So, while you start out with mere infantry, as you go, you’ll find yourself fighting against attack dogs, fully armed soldiers, helicopters and even a juggernaut.

When you start Survival Mode, the game plants you on a particular spot on the map, but you aren’t restricted to one specific area. In fact, as you progress through the waves, the map opens up even wider, allowing you to access other locations, and find better spots for cover. Also, unlike Zombies, the game won’t spawn the enemies in the same location; in fact, the game does the complete opposite by reacting to your play style. So, wherever you go, the enemies will always be right on top of you. There is nowhere to hide! 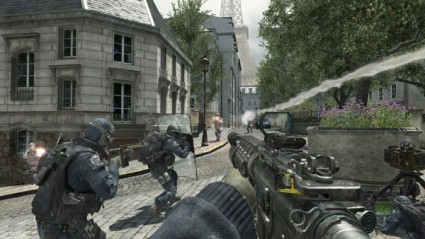 This ain't no patrol.

In between each wave, you can spend your cash on upgrading your arsenal, be it fully reloading your ammo, buying a whole new weapon and upgrades for it, or even something more destructive like Grenades or a Predator Missile. The money isn’t shared, so whatever is yours remains yours, but you still need to be very mindful of how much you’re spending, making sure you’re not wasting it. It’s also good to be semi-prepared for the type of enemy you’re about to face in the next wave, making sure your loadout is specific to your future opponents.

Unfortunately, it’s not all rainbows and sunshine. Graphically, the CoD engine is looking really dated; and I noticed this more after playing Battlefield 3 beforehand. CoD is in desperate need of a visual overhaul, something Treyarch need to be very mindful of next year. As good as Survival Mode is, even that can’t mask how much CoD’s look is depreciating…

I had absolutely no intention of picking up Modern Warfare 3 on launch as MW2 left such a bitter taste in my mouth, and yet, somehow, this all-new Infinity Ward have accomplished the impossible. Not only did they get my attention all over again, they’ve managed to create something so damn entertaining, I did not want to stop playing.

Survival Mode is sublime, and is one of the best additions to the Call of Duty series in a long time. I honestly can’t wait to get my hands on it again…