Spring is usually the time of year that has large numbers of us turning the heating off and heading to the garden centre for our vegetable seeds, while many others see the lengthening days and the Spring sunshine as an excellent opportunity to get out and walk off the post Christmas extra timber. It’s also the time of year where a huge number of frustrated golfers get the clubs out of the loft and head to the local course in an effort to get through 18 holes without the loss of too many golf balls.

Unfortunately, despite the fact that Easter is fast approaching and the clocks will be going forward in just three weeks time, it’s still far too cold to consider venturing out for any length of time, unless wearing at least six jumpers. Fortunately, we are also only three weeks away from the annual release of EA Sports’ golfing giant and for those of you keen to sample the wonders and frustrations of the Golf Course without having to get your thermals out, the TW14 Demo is already available on Xbox Live and PSN.

As is always the case with one of EA Sports’ big franchises, the first question is always “what’s new?” To which the immediate answer after playing the demo is “Not a lot”. This year’s edition sees another minor change to the Challenge mode, with the format now being called Legends of the Majors and sees you recreating moments from the Major tournaments throughout history. In this demo the only event open is the 1961 Open and has you looking to emulate Arnold Palmer’s maiden Open victory.

Despite the change of name and the new look it brings, the basic set up and premise of the Challenge mode is much the same as ever. Play a few holes, beat the target score and get either a Silver or Gold award for your trouble, depending on just how well you do. 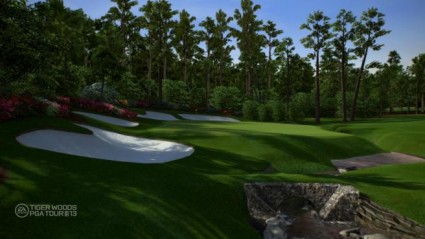 Who wants to build a sandcastle?

The other key change displayed in the Demo is the new online mode, Connected Tournaments. This is Golf’s answer to an online career mode and sees you taking part in a live online tournament where you submit your scorecard and are added to a live leaderboard. In this short demo you have two tournaments in each of the five difficulty settings, consisting of three holes.

The courses are Royal Birkdale and Oak Hill Country Club, and as you’d expect they are both immaculately recreated by the EA Sports team. You can choose to play as Tiger or American female Golfer Lexi Thompson, who again are both represented with the level of detail and polish that we have come to expect from the series.

Out on the course, the difficulty settings range from Amateur to Simulation and will see certain aids and assists removed as you progress, as well as the general difficulty increasing. Basically, though, the tournaments and the aim are the same throughout the demo. 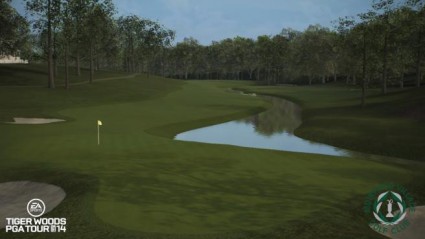 The courses remain incredibly pleasing on the eye

Despite being a Live Online tournament, you are effectively battling against the course and trying to get the lowest score possible. Other players gamertags will show up on the screen and you can chat with the other competitors should you wish. The only other signs of additional life are the occasional white trail as the flight of someone’s last shot is highlighted on-screen, which can be quite off-putting to begin with.

The game mechanics are more or less exactly the same as last year with the club swing being performed on the left stick and things like Putt Previews and Ball Spin to assist you on your way. You can switch clubs and change your stance via the trigger buttons and the Right stick respectively, and the option to go into a practice swing is also brought over from previous versions.

It’s not just the mechanics that appear to have little change either, both sound and vision are, to the naked eye/ear at least, almost identical to last year’s offering. In fact, to me they could have been lifted directly from TW13 they are that similar, right down to the tweeting birds. 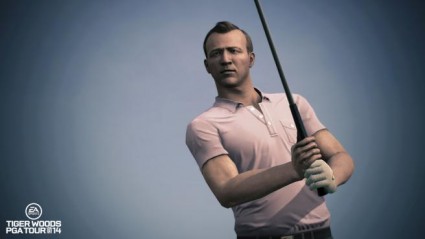 When you talk about Legends, they don’t get much bigger than this fella

After playing the demo of TW14, I can’t help but get the idea that EA Sports are possibly more desperate for the next generation consoles than any other developer, as it gets harder and harder to bring any meaningful upgrade to the annual sporting franchises. The Tiger Woods series, for me, has always found this harder than most as with only one character on screen for most of the game and little change to the competitors or the courses, the visual changes are never that easy to see.

Having said that, I have no doubt that this will be another excellent Golf sim and the Connected Tournaments, along with a continuation of the Country Clubs from last year, will bring even more community gameplay to the fore; something EA Sports generally excel at. The big question though remains; is there enough here for owners of last year’s game to prompt us to part with our cash, again?