The Vent: A Difference of Opinion

I wish people would stop telling me how awesome Half-Life 2 is. I’m sick of hearing it. Unlike a lot of the windbags filling the internet with negative reviews despite never having played the games in question, I make it a principle to never put down a game before I’ve played it. So I’ve played Half-Life 2 and it’s alright. Just alright.

And yet I’m told everywhere I go that it’s the best game ever made (or one of them) and that I should like it. It’s like the belief that Half-Life 2 is a life-affirming title has been folded into the fabric of reality; a new law of the universe. Like gravity, time and the spherical shape of the Earth. The actual fact is simply this: the majority of vocal gamers think it’s great. Does that mean it’s true? Of course not, but that doesn’t stop them from preaching like a bunch of Born-Again pastors at every chance they get.

I would say that, by and large, I have a good taste in games. Aside from sports and racing titles (which have never done it for me) I usually like most of the top titles on offer. Skyrim, Mass Effect, Gears of War, Assassins Creed; all the series people go on about are in my top ten. As you’ll know if you’ve been following my little weekly tirades I also have a soft spot for so-called ‘middle-class’ games and make a habit of adding them to my LoveFilm list and giving them a go.

So, with that in mind, you’ll understand that when I say I honestly cannot see the appeal of some of these supposedly legendary games I’m coming from a position of wide experience. I’m not, for lack of a more civil term, a noob. I know my games, I write about them all the time and have been playing them for most of my natural life.

So with the pre-emptive self-defence done with, I’ll get to the meat of this week’s jaunt. Why is ok to chastise people for having a different opinion? And worse, why is it accepted that we do? As far as I’m concerned it applies the same as any other matter of personal preference; sexual orientation, musical tastes, food, drink, clothing style. For a long time excluding people based on those things has been considered morally, if not legally, wrong.

Have a go at someone for being gay these days and, rightly so, you’ll be brought up on legal charges of prejudice. While sidelining someone because they eat meat or like death metal won’t land you in court, good-hearted people still consider it to be a dick move. The issue lies in the dark side of gaming culture; the side that sees racist, sexist and homophobic behaviour accepted as a normal part of the online experience.

I am white, male, straight and have no disabilities. I like good films, good books and good rum. I also generally like to think I’m a nice guy. The only thing anyone has to pick on me for is my musical preference and the accompanying style. When I’m out at night with my hair spiked up, studded waistcoat and heavy military boots on, I have to put up with a certain degree of abuse. While it rarely turns violent, I have on occasion had to fight people because they just can’t stand the way I dress. This is getting away from me but my point is that people find any reason to exclude each other from anything. It’s part of human nature.

Pack animals or a group mentality; there are numerous names for it. We like to stick together and there’s nothing better than feeling like you’re part of an exclusive group. I do it all the time; being part of the punk subculture makes me feel special in a way. So does being a gamer. We all get annoyed when we hear people whose gaming experience is limited to Angry Birds bang on about how much they’re into games, whether we’re crass enough to challenge them verbally or not. 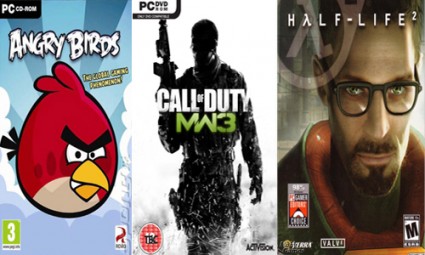 This is not the be-all and end-all of gaming...

Of course there’s a good side to this mentality. The side where you approach that person (or people) and proceed to ‘school’ them in the joys of gaming. You recommend games to them, explain the benefits of Xbox over PS3 (or vice versa) and give them your Gamertag. It makes you feel good because you’re like a teacher, a mentor, a Godfather. You walk away like ‘Hells yeah, I just impressed the shit outta those people with my awesome knowledge’, and have a grin on your face for the rest of the day. Hopefully those people will go on to buy a console and get some of the games you suggested, and feel the absolute wonderment of discovering endless worlds and years worth of entertainment.

Yet it’s the bad side that seems to come out the most. It’s here we come to the crux of the whole thing; stop fucking telling me what I should and shouldn’t like. Suggest, encourage, profess and attempt to turn me by all means. If you genuinely want me to experience the game as you do then you’re welcome to try and convince me. I do it all the time; I talk about a game I love and paint a picture of it the way I see it. All I ask is that people stop automatically assuming a particular game is cosmically awesome. Different people like different things and that’s ok. There’s no need to try and convert the entire world; as far as they’re concerned they aren’t missing out.

So the next time I ask someone ‘Why is Half-Life 2 supposedly so brilliant?’ I don’t want to hear ‘It just is’, or another cop-out explanation, or I will explode. Literally entrails-and-blood-all-over-the-fucking-walls explode…