The biggest strengths that Infinite had was its characters, story and setting. Burial at Sea tries to re-use our affection for Infinite’s characters and the original Bioshock’s setting but then has to create its own (half of a) story in about two hours of play time. A difficult feat at the best of times and one that Burial at Sea doesn’t quite pull off.

As you can imagine, with the game taking place in Rapture, the environments steal the show once again. Seeing this familiar location through a slightly new lens gives you a greater appreciation of just what a wonderful world Ken Levine and his team crafted.

The new lens in question is the fact that this game takes place before the events of the first Bioshock. This means that you’ll wander through a Rapture that’s in the best shape we’ve ever seen it. Fine boutiques offer their wares, posh bars are attended by well-spoken and plasmid enhanced waiters and art galleries show of the latest works of Rapture’s elite. It’s a brief glimpse into the wonderful world of Rapture, though the game very quickly lets you know that not all is well in this underwater utopia.

It turns out that Rapture has its own problems and prejudices, much like the racist, floating fortress that was Columbia. 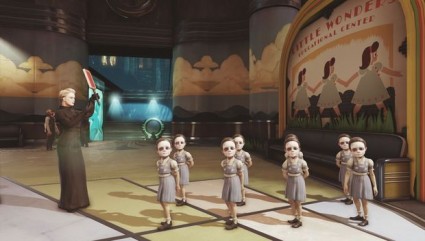 Rapture has its issues. As you can tell by these creepy little girls…

This version of Rapture tries to fool you into thinking that all is well by being in such contrast to Columbia’s segregated ways. A black man is seen having his shoes polished by a white man. A gay couple stand admiring the view of a giant whale swimming by. It all seems so perfect but all Rapture does is swap one set of problems for another.

Rapture believes that only the strong survive, and as a result an extremely ruthless free-market has developed. People are only worth what their intellect or business acumen dictates. This dog-eat-dog world is fuelled by success and progress and be damned anyone that stands in the way of either.

Burial at Sea has a vision of Rapture that’s so interesting I found I spent most of my time idling up to NPCs to see if they’d drop a line or two of dialogue. I’d wander into every store, not so that I could find any weapons or collectibles, but in the hope that I’d spot a poster or audiolog that would bring this world to even greater life. 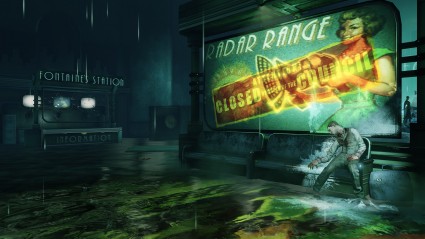 Rapture looks great. Apart from the parts of it covered in blood and corpses.

The rest of the game suffers from several issues. Firstly, the story doesn’t really do much and suffers from major pacing issues. The DLC’s pre-release promise of ‘Dick Tracy underwater’ never gets fulfilled. Instead you get a rushed explanation of what’s happening at the end of the episode that had me interested to play the second episode, but doesn’t leave me too satisfied with having played the first.

The Bioshock series as a whole has somewhat shot itself in the foot with the whole ‘infinite possibilities’ angle as well. When anything is possible, it’s hard to make anything matter. It’s hard not to think of everything that’s happening as ‘fake’ and at any moment you’re waiting for someone from the ‘real’ reality to show up and turn everything on its head.

Another big problem is that the story doesn’t create interesting gaming moments. I don’t want to spoil it too much, but I can boil down what you do into three quests.

That is literally all you ‘do’. If it wasn’t for the intermittent combat sequences, this would all be over in 20 minutes. Luckily enough the combat’s solid, though has some of its own issues. 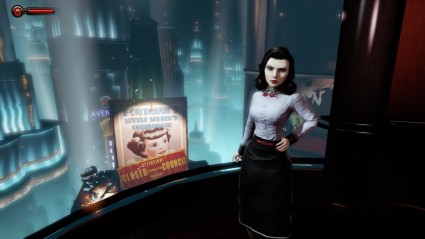 The switch to Rapture is beneficial to Bioshock’s shooting and plasmid-using mechanics. The tight corridors mean you can make better use of your flame traps. It’s always satisfying to funnel enemies into a doorway that you’ve loaded with a magical exploding fire… thing.

Oh, that’s right. Booker no longer uses tonics and is instead back to using plasmids. Not that there’s any real difference. You’re still shooting lightning, ice and fire out of your left hand while shooting people with your right. Well, you’re throwing magic death around and shooting hot lead until you run out of ammo that is.

A major issue with Infinite’s combat still remains and that’s the lack of resources. The game provides a good number of weapons and abilities to use, but when you start firing off in the middle of a battle, you very quickly run out of EVE for your powers and ammo for your weapons.

I remember wanting to lay a number of elaborate traps, to combine my ice and fire powers to see what effect it would have on my enemy and to use a newly acquired tommy-gun. Naturally, I couldn’t. My EVE ran out after shooting off two Fire-traps and the tommy-gun fired at such a rate I had to switch weapon before I knew it.

Burial at Sea still retains the same combat issues that Infinite had, even if the wonderful world of Rapture is better suited to the fighting mechanics. The presentation and attention to detail is up there with the best that any Bioshock game has done before, it’s just that the beginnings of this story offer little to do and provides few set pieces.

Which is really the crux of the issue. This piece of DLC, which in its defence is subtitled Episode 1, doesn’t really have enough going for it on its own. When the second and final instalment is released, this will either turn out to be the start of something special or the beginning of a big disappointment. On it’s own, it’s not much of anything.

Big fans of Bioshock and of Rapture in particular may want to get in on Burial at Sea’s story right now, but for everyone else I’d recommend waiting for the conclusion and judging the series as a whole.