Borderlands has never been a series that I’ve ever gotten to grips with. It’s as unclear to me as anyone else, as it has everything I could possibly want: a good sense of humour, a striking visual art style, solid gameplay, and a heap of extra content to keep me occupied well after finishing the main story. The Pre-Sequel was not the most sensible starting point for me, but it’s a starting point that I’ve enjoyed jumping on nonetheless. Borderlands: the Pre-Sequel is exactly as it sounds: a prequel, with the story focused on Handsome Jack’s rise to power, and his descent into evil. It’s an excellent supplement for Borderlands 2 as it helps to illustrate when Jack – a low level programmer for the Hyperion corporation – turned into Handsome Jack, the malevolent dictator with an egotistical name. 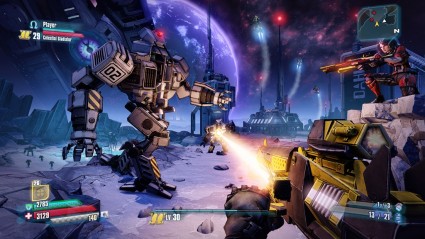 This guy wants to ‘mech’ you dead.

The Pre-Sequel starts out very much the same way as its predecessors, but told in flashback by Athena in a scene from the first Borderlands. From there, it’s pretty standard Borderlands formula, as you are introduced to the four playable main characters from previous titles: Athena, Wilhelm, Nisha, and Claptrap (admit it, you are going to play as Claptrap). Each character plays more or less the same, apart from their unique special abilities. You can always go back to change to a different character if you aren’t a fan of their unique play-style, so your first choice is not detrimental.

When you’ve made your choice of character (Claptrap, obviously), you are quickly thrown into the fray that will lead the vault hunters to their first encounter with Jack, and the explosive introduction that lands the vault hunters on Pandora’s Moon, Elpis. “Wow, All we did was get off the bus”, Mordecai says in these opening scenes, humbly acknowledging the grand entrance 2K Australia is trying to make with its Borderlands debut.

The story goes on to give Jack a moral compass, who then proceeds to ride the damn thing like a merry-go-round. It does add some depth to his character, but the inevitable decline of his morality becomes readily apparent very early on, as Jack quips “boy, that felt pretty good” after every questionable action he takes. It is quite hard to sympathise with a character that is so self-aware of his despicable nature almost from the get-go. While at the start he seems pretty selfless in helping those around him, this turns on its head and becomes apparent that everything he does is for himself; who in all honesty can say they are surprised by that?

Elpis isn’t just a change of scenery for the franchise; it also plays differently too. As a moon, the gravitational pull isn’t as strong as it is on Pandora, meaning that you are free to jump great heights and propel yourself mid-air (mid-space?), giving greater control to your trajectory. Being on a moon makes it very hard to breathe unsurprisingly, so an oxygen gauge is also added into the mix. These are two of the features that make The Pre-Sequel feel like a successor to the Borderlands franchise rather than an expansion pack.

Having to monitor oxygen levels as you traverse the moon’s surface means that you have to observe a more conservative play-style, as it is easy to be in the middle of a shootout with Australian space bandits, and suddenly realise you are starving your character’s oxygen supply as they gasp for breath. Unless you are Claptrap, of course, as he doesn’t need oxygen. Oxygen can be found in small air pockets decorated around the surface of Elpis, as well as the occasional O2 supply, or ‘OZ’ supplies as they are called on Pandora’s Australian-accented moon (Cute, Australia. Real cute.)

The main issue with the moon-gravity is that it is very easy to paint yourself as a target, as you fling yourself through the air like a clay pigeon for the enemies to take potshots. The extra propulsion also eats through your oxygen supply very quickly, so it can only be used in short bursts before you need to replenish your reserves. It does add a layer of strategy to the core gameplay, but it still retains the feel of a Borderlands title.

Of course, The Pre-Sequel also offers an arsenal of weapons that could rival a small country’s military, and choosing a weapon can seem like a daunting task. It’s always good to try out all the weapons that are on offer, and stick with the ones that best suit your style of play. It does also mean that it’s quite easy to become a hoarder, as you are reluctant to sell/throw away anything that you come across, just in case you need it later on. 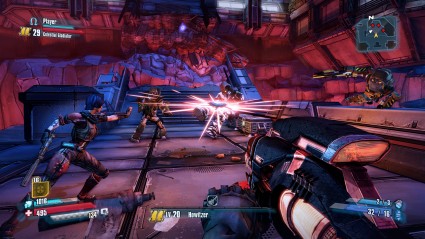 You can always rely on your friends (or anyone with an internet connection) in a pinch.

Borderlands has – and always will be – best played with others online, and The Pre-Sequel is no different as the difficulty can spike when fights get hectic. Even though the enemy level is scaled when playing as part of a team, it always helps to have an extra hand to watch your back when fighting through hoards of enemies. I found myself getting constantly flanked down when playing alone, and levels that were nigh on impossible to complete by myself were much easier when playing with other vault hunters, who could revive me on short notice and make sure that I wasn’t being overwhelmed.

Man on the moon

Borderlands: The Pre-Sequel is just that: more of the same. That isn’t necessarily a bad thing, obviously. Borderlands is a great series, and having another full length title to stand alongside the rest is a good thing. The Pre-Sequel does just enough to make the experience feel fresh, whilst also bringing an extra layer of lore to the Borderlands experience.

Clocking in at around 8-10 hours on the main campaign, it’s a laudable effort on 2K Australia’s part in contributing to the series, and it has made me look forward to the upcoming DLC. If you have never played a Borderlands title before, then a lot of the references may fly right over your head, but if you are a die-hard fan of looting, vault hunting, and everything Claptrap related, then this is an experience that you won’t want to miss.