While much of their JRPG output has been met with mixed reaction over recent years, I can’t help but feel sorry for the stumbling giant that is Square Enix. They seem eternally stuck between long-standing genre traditions (that they themselves helped to shape) and the call from the gaming community to reinvent – a conundrum for which they just haven’t yet found the answer.

Even as someone who enjoyed Final Fantasy XIII and really dug its sequel XIII-2 (I know; I’m a monster), I don’t think even I could deny that they appear to be in something of an identity crisis. Especially when you look at the gross commercialisation and gimmickry of the upcoming Lighting Returns and the lack of care taken over some of their recent ports to mobile formats.

This, however, is exactly why the new 3DS exclusive Bravely Default has been such a lovely surprise. Funded by Square, but developed by Silicon Studio as something of a spiritual Final Fantasy successor, this charming and capable JRPG proves that at least there’s someone out there that still understands what at one time made Square’s games so revered.

You begin Bravely Default as Tiz, a young boy whose home town has suddenly been sunk into the ground by an unknown force, leaving nothing but a smouldering pit of sediment. Badly injured and seemingly the only survivor, he’s found by the inhabitants of nearby Caldisla and left to rest at their local inn. After healing and gaining permission from the King, he is allowed to return to his former home town to see the destruction for himself.

At the site of his people’s demise he encounters a young girl of great power called Agnes. She is apparently the Vestal of the Wind, and aggressively sought after by the shady ‘Knights of the Eternian Sky’, a party at war with Caldisla. Agnes is on a mission to revive four sacred crystals before the world’s end and, without anything further to live for and against Agnes’s wishes, Tiz tags a long to help her achieve her goal. Joining them shortly afterwards are Ringabel, Bravely Default’s token amnesiac; and Edea, an enemy believing that she’s fighting a just cause, before realising the true intentions of her people. 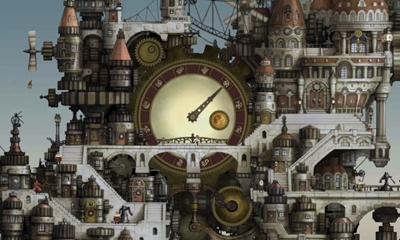 This fantasy story finds its success by acting as a bit of a throwback to the roots of the Final Fantasy series and while it does stutter and drag its heels unnecessarily a couple of times, it’s nearly always entertaining. It’s pleasantly told and lovingly presented, though I did cringe at some occasional spelling errors in the subtitles (yes, a ‘bald’ plan indeed!). There’s a surprising amount of spoken dialogue for a 3DS game, the delivery of which varies in quality depending on the given character and the whimsy of the line being spoken, but surprisingly, no one character becomes irritating because of the genre’s staple melodramatics.

During the lengthy campaign, you’ll be exploring the entire game world via some beautifully hand-drawn fantasy locales that are somewhat reminiscent of Final Fantasy’s earliest days. The world is delightful and absorbing in this respect and it’s always a pleasure to see what awaits you in the next area. Characters, too, take their cues from the past; the designers opting for the cute Chibi route in a manner as if to aim to mimic 2D sprites of yesteryear, bringing them into three dimensions. It works wonderfully in this setting. Meanwhile, a sweeping, orchestral soundtrack matches the highs and lows of your party perfectly in every scene.

The most original thing about Bravely Default is the combat system through which it gains its name,which plays gently with the traditional JRPG menu-driven formula. Rather than just allowing you to attack or defend in turn using a myriad of physical or magical attacks, a function called ‘Brave’ essentially allows you to take up to four turns in one, the caveat being that you’re unable to use that character for the next four moves. To combat this, you can stock up attacks in advance by using the ‘Default’ option, which puts you in a defensive stance and allows you to store an extra turn without losing one.

You can stack or be in deficit as you like, but you have to keep in mind the power of your opponent and your strategy for beating them. Using four turns up front does help with lower-level enemies, as you can just queue up four attacks in advance for each party member and grind swiftly using this method at no penalty. Be warned though; there are a lot of enemies that aren’t pushovers, and many will target your team’s weaknesses.

With grinding in mind, another welcome feature is the option to change the frequency of random encounters. This was brilliant when playing on public transport, as I could up the encounter rate and spend the 10-20 minute journey just level grinding, helping to keep my party powerful enough for when I wanted to progress properly in longer sessions later. Likewise, if you’re underpowered before a powerful boss or dangerous area, you can opt to grind at a quicker pace until you hit a suitable level and drop it back down again. You can even turn encounters off entirely should you simply want to pass through to the next checkpoint unimpeded. Honestly, I’ve wanted this feature in this genre for so long, and it’s every bit as useful as I’d hoped, allowing me to progress at my own pace. 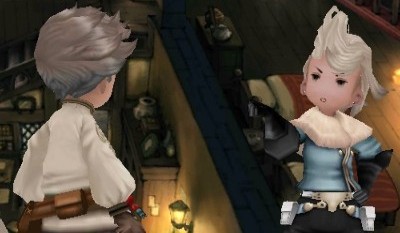 It wouldn’t be a JRPG without a resident amnesiac!

The job system is another brilliant feature that allows you to decide on all four party members’ roles and change them around as you like, when you like. You need to unlock a given job by first beating a key character in the game (and thus most are tied to story progression), but the more you play, the more impressive Bravely Default’s customisation becomes. Say you’re about to fight a majorly powerful villain and you think you’d value another White Mage on your side, you can do that instantly by simply changing a party member’s job. Also worth noting is that once abilities are acquired by levelling up a job role, you can use them to support other roles too; it’s really flexible.

To help swing battles in your favour, you can use SP Potions that pause time so that you can launch attacks at any point during battle, regardless of whether it’s the enemies turn or not. You earn these SP drinks over time by leaving your 3DS in a sleep state while the game is loaded, though you can buy them with real money using dreaded micro-transactions. While you no doubt reel from the phrase ‘micro-transactions’ appearing in this review, note that this is an optional advantage and in no way is the general balance upset by their inclusion. These potions are just as easily earned when your 3DS is in your bag on a commute or charging overnight and, personally, I never actually resorted to using one as the core combat is just so much fun.

That said, it’s undeniably a clever use of the handheld’s sleep mode, and Bravely Default uses the system’s other features in interesting ways too. For example, you can summon registered friends and Streetpassers to help you mid-battle, or link your team with other players’ parties so that they or you can use skills yet to be learned. One of my favourite features, though, is Tiz’s mission to rebuild his fallen city; a completely separate, menu-based endeavour that will eventually provide new gear. The rebuild is done by recruiting town members via Streetpass and setting them shops and buildings to resurrect and leaving them to it. The more players that that pass you by on the way to work or school, the quicker you can reconstruct his town and get that sweet loot. Like nearly everything else in Bravely Default, it’s a solid concept well realised.

Can this be the Final Fantasy series now, please?
Much to my surprise, Silicon’s take on Final Fantasy manages to shine brighter than Square Enix’s own recent, bigger-budgeted and higher-profile efforts. Its beautiful design speaks for itself, but Bravely Default‘s absorbing world had me engaged from the get go, and its take on the genre’s turn-based combat kept me hooked as I took delight in experimenting with the different jobs and the strategies they afforded me. The inventive use of 3DS hardware features too was welcome, especially those of a social nature, superbly woven into this classy adventure.

The biggest testament to Bravely Default, however, is simply in the difficulty I had in putting it down. Yet another highlight for the 3DS’s ever-impressive library.