After the series’ unsuccessful expedition into modern times with Call of Juarez: The Cartel, the Call of Juarez series is proudly stepping back into its rightful, spur-clad boots. “Out with the shitty, gritty city that people mainly pity. Back to the best, blessed Wild West that people don’t detest,” someone at Techland probably said once, in a board meeting.

The po-faced goings on of its predecessor went hand in hand with the aesthetic blandness of the art direction and the deeply unlikeable, soulless characters. In this iteration, however, things are different; everything is done with its tongue hanging flaccid out the side of its mouth. There is vibrant colour and interesting scenery all around the player, and the characters are all hilariously exaggerated.

The game acts as another shining example of a studio testing the waters with a smaller scale, downloadable title; and, just like with Far Cry 3: Blood Dragon, Ubisoft have delivered the digital goods once more.

It’s 1910, and Silas Greaves, a legendary bounty hunter (and master bullshitter) is thirsty. He enters a saloon, where, upon mentioning his name to the barkeep, the patrons inside develop an interest in any potential grandiose tales that he may care to recite.

They gather around as Silas tells his story through cel-shaded, comic strip panels. And Silas name-drops a plethora of recognisable big fish of the era, placing himself as their vanquisher.

This narrative device is used to ship the player around to a variety of different locations, and it’s even used to switch out the layout of any given mission, mid-flow. In some missions you can start, for example, by fighting your way though a train, but then Silas will backtrack (because he’s drunk) and you’ll be plonked right to the back of the train as he recalls the tale from the start. It’s jarring, but in a good way. 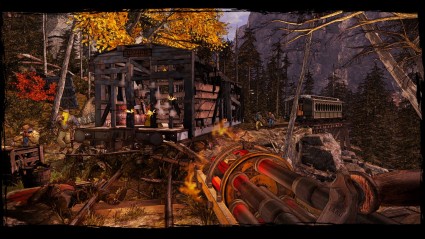 The West has never been so wild

Though it’s okay because you, the player, will experience these moments anyway, whether fabricated or not. Also, with the narrative being told the way it is, it gives the developers freedom to add in some surreal moments. Think of traditional games and the way they may artificially bar progress until ‘x’ amount of enemies have been killed, and this game does similar, but with a knowing wink and a smile.

Beat the Devil around the stump
From a gameplay perspective, this is a game that’s all about one thing: shooting people accurately in the face… really fast. This isn’t your standard shooter fare, though, with an old-school, arcade feel to the combat and a heavy emphasis on point scoring and multiple replays.

There are three skill trees, shaped like revolver cylinders, that you can feed points into once you hit a specific milestone, thus increasing your level. The three skill trees correspond to pistols, rifles and shotguns, with some skills feeding into other categories and spreading their effectiveness. If you plan your route carefully you can have a pretty beefed up Silas by the end of your first run.

Of course, after that you can play the whole thing again in your quest to unlock all the skills, or to beat the unlocked difficulty that becomes available upon completion. At its heart, it’s a game about maxing out your skills (which is really just your initiation) and then poking away at the leaderboards, chasing that elusive number one spot, or your mate, Dave, who’s a right tool.

The trick to getting high scores is by chaining them together whilst mixing up the way you kill. You can score points based on headshots, hitting a running target, shooting a target through light cover, or, naturally, blowing them up with conveniently placed barrels of gunpowder. 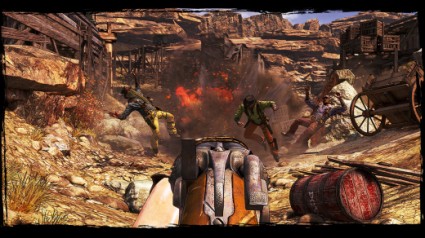 You can use a skill called ‘Concentration’ to slow down time and score extra damage, although the window for this is relatively short, meaning scoring a significant amount of kills whilst it’s activated comes down to how accurate your twitches are.

There is another skill which fills up as you take down your enemies, called ‘Sense of Death’, which gives you a second shot at life should you run low on health before you find cover. Time slows to a crawl (as it tends to do in games that have bullets) and you will see the fatal bullet, hurtling towards you. You must judge its trajectory and decide whether to dodge left or right. Should you choose right (as in ‘correct’, not the direction), then you get to live. Should you choose wrong, you die. It’s pretty straightforward but, once you begin to realise in which direction you need to dodge, it lessens the frustration of being shot at constantly.

There’s literally no respite. The game is about a constant hail of bullets landing all around you, whilst you try your best to whittle their numbers as fast as possible. Occasionally you’ll pop behind a rock and have a little crouch, allowing your health to replenish like Wolverine.

Outside of the bulk of the combat, the odd QTE is woven into gameplay, creating opportunities for the player to take down a large amount of enemies in quick succession. Failure just means that you have to take them down by more conventional means.

Silas also enters into a duel with nearly every major player in the narrative. In the duels the aim is to keep an indicator, controlled with the right stick, focused on your enemy as they pace the room in anticipation, increasing a focus meter and giving you more accuracy when you eventually draw your weapon. The left stick is used to hover Silas’s hand over the revolver at his hip, teasing it back and forth, with the pad vibrating as you hit the ‘sweet spot’. The duels manage to stay interesting by introducing new mechanics, like a Mexican standoff, or multiple opponents.

Fine as cream gravy
Graphically, the game is pretty impressive. Some textures are a bit choppy, but it’s just refreshing to play a shooter that has so much colour. It’s like a plucked chicken that’s had peacock feathers implanted in its leathery skin.

The lighting does a good job of creating the illusion that you’re in the West, with the sun’s presence dominating the skyline. Hundreds of little shafts of light penetrate through the red leaves of Autumn. 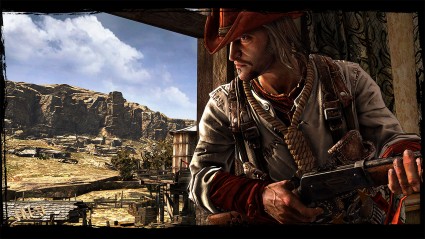 On top of this, most objects are interactive; well, at least in a sense that you can shoot them with bullets. Barrels bleed water when penetrated, pumpkins splat (and give you points, for some reason) and animals die… if you shoot them. Like I did. You also get points for killing animals. Not horses, though; just animals PETA doesn’t care about, like chickens. Hi, PETA.

There are also a variety of weather conditions that work well within the cel-shaded art style of the game. The visual style helps to lift the game above being another generic first-person shooter, working in tandem with the tongue-in-cheek narrative to inject the game with a healthy dose of personality.

Fandango
The music in the game is pretty much what you would expect from a Western anything, really. Twangs and rattles surf through your audio device. Slowly the music plays, building to a crescendo during the shoot-outs themselves.

The bullets ping and ricochet through both speakers. Insults and foul language are batted backwards and forwards throughout each confrontation, with the characters sounding as you would expect in any Western tale, with their country folk drawls and raspy barks. The wind whistles through your ears and the rest of the elements all play their role in heightening the fitting atmosphere.

The whole kit and caboodle
The actual shooting in Gunslinger is fun. Nothing more, just fun. I really don’t like to use that word in reviews, because it tells you so little, but I really can’t think of a better word to sum it up. The gunplay is fluid, responsive and fast. There’s also a great sense of feedback from the weapons themselves, with each shot feeling powerful and impactful as the shots rip through the scenery.

The graphical style does its best job of simulating having a kaleidoscope shoved into your eyeball, and the way the narrative is told offers up some truly funny and intentionally jarring, fourth wall-breaking moments. The dialogue is nice and snappy, with a few Easter eggs for fans of Spaghetti Westerns, like coming upon a shotgun that could “cut a man clean in half.”

The best thing about the game, though, is its price. This game is twelve pounds. There is a lot of game here for twelve pounds. I paid twelve pounds for a burger in London, once. The burger wasn’t that great and I don’t have it now. We all have our weaknesses. Whatever your burger is, cast it aside. Buy this instead.